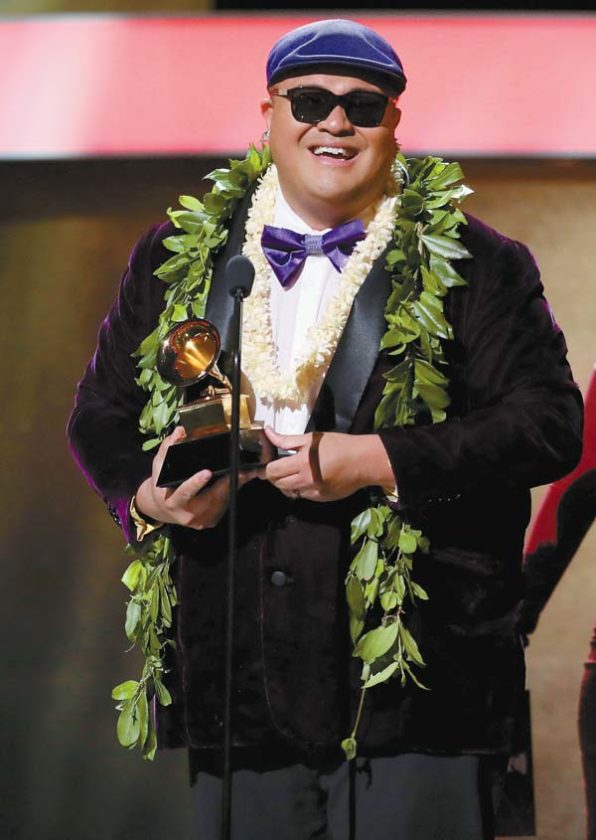 Running down the aisle with his arms open wide, Maui singer/songwriter Kalani Pe’a stepped on stage to accept a historic Grammy Award on Sunday in Los Angeles.

The 33-year-old artist won the Best Regional Roots Music Album category for his debut album, “E Walea,” his first-ever Grammy and the first time a Hawaiian artist has topped the category since it was created five years ago.

“I saw my name, I jumped up and grabbed my family and just ran down and screamed,” Pe’a said after the Premiere Ceremony of the 59th annual Grammy Awards show Sunday.

“I saw light and laughter and smiling faces and people who believe in music.”

After being in separate categories for several years, Hawaiian, zydeco, Cajun and Native American nominations were combined for the 2012 Grammys. Cajun and zydeco artists have won every year since then.

“I am so happy to honor my ancestors,” said Pe’a, a Hilo native who now lives in Wailuku. “I am so honored to represent as a Hawaiian language immersion graduate. . . . I can’t even explain anything else other than being just grateful to represent Hawaii.”

“E Walea” means to come together, like birds, to be elated and exuberant and to enjoy, according to Pe’a’s website. Seven of the tracks are original compositions in Hawaiian; the other five are covers, including a Hawaiian version of “You Are So Beautiful.”

“I wanted to compile an album of Hawaiian contemporary and soul, because I’m not really a traditional Hawaiian singer,” Pe’a said. “I am a millennial Hawaiian who loves to write Hawaiian music with innovation and creativity.”

The artist has come a long way from a 4-year-old who was diagnosed with a speech impediment to a Grammy winner.

“Music saved my life,” he said.

At first, his parents took him to a speech therapist who “was so strict that I didn’t like working with her, and I stammered and stuttered so much as a kid.”

When therapy didn’t work, his parents introduced him to music, encouraging him to take vocal lessons and entering him in several competitions. Singing not only helped with his pronunciation but also earned him some acclaim. At 8 years old, Pe’a won numerous statewide competitions, including Brown Bags to Stardom. And while attending college in Coloardo, he took first place in the National Association Teachers of Singing Competition in the Colorado/Wyoming chapter.

“All of a sudden I’m here at age 33 with a Grammy Award for my debut album,” Pe’a said.

On Sunday, Pe’a’s mother, Pua Leonard, was in Los Angeles to see her son win. “She had to come on the trip because she introduced music to me,” Pe’a said.

His victory capped a whirlwind week that included a concert on Kauai and a sold-out show at the Grammy Museum in Los Angeles. While there, he performed with fellow Hawaiian musicians Henry Kapono, Johnny Valentine, Alx Kawakami and Blayne Asing, celebrating the museum’s latest exhibit, “We Are Friends: A Lifetime Party of ’70s Hawaiian Music.”

In between all the events, Pe’a said, highlights included shopping at Louis Vuitton and enjoying “the nice cold weather” with his family and friends.

As a Hawaiian resource coordinator at Kamehameha Schools Maui, Pe’a has been teaching Hawaiian culture with a science focus and creating curriculum for about eight years. He is fluent in Hawaiian and is a 2001 graduate of Ke Kula ‘o Nawahiokalani’opu’u on the Big Island. The singer has also illustrated and published five Hawaiian language children stories from Hale Kuamo’o at the University of Hawaii at Hilo.

Once back on Maui, Pe’a said that he looks forward to continuing teaching, starting his second album and networking more with other musicians. His life, he said, is music.

“Music is not only a profession,” Pe’a said. “It’s not a career you choose. Music is life. Music is part of me.”