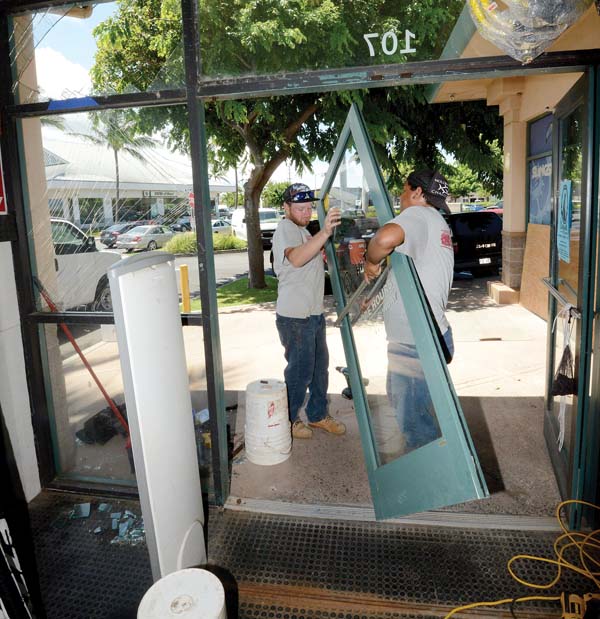 Sam Lincoln and Lama Pupuhi of Lincoln Construction rehang a door at Hi-Tech Surf Sports on Thursday morning in Kahului. Thieves used a stolen vehicle to smash open the doors to gain access to the store where they raided a GoPro case stealing aerial drones and cameras. The Maui News / MATTHEW THAYER photo

Carpet stained with tire tracks from a burglary had been replaced before Hi-Tech Surf Sports in Kahului was hit again early Thursday when a sport utility vehicle smashed through glass and knocked a door off its hinges.

GoPro cameras, accessories and drones were taken from cases and 30 women’s swimsuits were stolen in the break-in at 4:42 a.m. at the store at 425 Koloa St., said Kim Ball, president of Hi-Tech Surf Sports.

He said employees were still calculating the loss, which included more than $10,000 in merchandise as well as the damage to the store.

“We have to rebuild the store front,” Ball said. “It’s just pretty discouraging. It’s really disappointing. But in the whole scope of things, nobody died or anything.

“It seems like the burglars target the local businesses.” 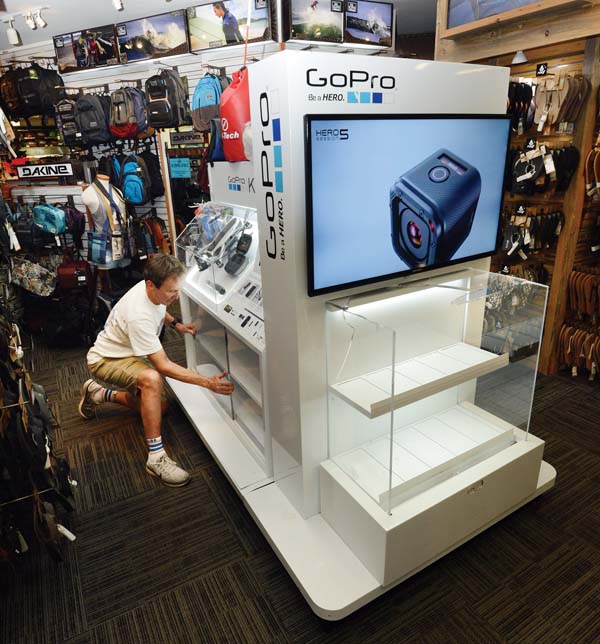 Police officers responded to the 5:03 a.m. alarm call to find the door to the store had been rammed in by a vehicle that had fled, said Capt. Ricky Uedoi, commander of the Wailuku Patrol District.

He said police were still investigating. He encouraged anyone who saw something suspicious in the area or who has information about the burglary or suspects to call police at 244-6400.

Ball said store surveillance video shows a sport utility vehicle backing into the store through the rental side entrance, breaking glass and knocking the door off its hinges. Two men with their faces covered entered the store, while someone else is seen driving the vehicle, Ball said.

He said the burglars used a crowbar to break into cases, stealing GoPro cameras and accessories from one case and two GoPro drones from another case.

Ball said he believes Hi-Tech is the only store on Maui selling GoPro drones. If anyone is offered the drones for sale, “they might want to think before purchasing stolen items,” Ball said.

“They were in and out in two minutes,” he said.

The burglars had taken a surfboard but left it outside the store, Ball said.

The burglary Thursday was similar to one in April 2005, also at Hi-Tech’s flagship Kahului store, when a Toyota 4Runner crashed through the main entrance doors at 1 a.m. and three men stole surfboards and skateboards.

After that burglary, concrete posts were installed along the front entrance to try to prevent a vehicle from crashing through the store again, Ball said. On Thursday, he said the sport utility vehicle drove between a small opening between one of the posts and a tree.

On the door that the vehicle crashed through was a poster for the 30th annual Larry Libres Memorial Fishing & Diving Tournament, which is among community events that Hi-Tech helps sponsor, Ball said. About 600 people are expected to participate in the event Saturday at Kanaha Beach Park.

“It’s ironic that they bulldozed that door,” Ball said.

He said carpet that was stained with tire tracks from the earlier burglary was replaced just last year.

From viewing the surveillance video, Ball said the burglars appeared to be “good sized.”

“The two that came in were not skinny guys,” he said. One man was dark-skinned and heavy-set, he said.