New owners promise everything will be the same except the name 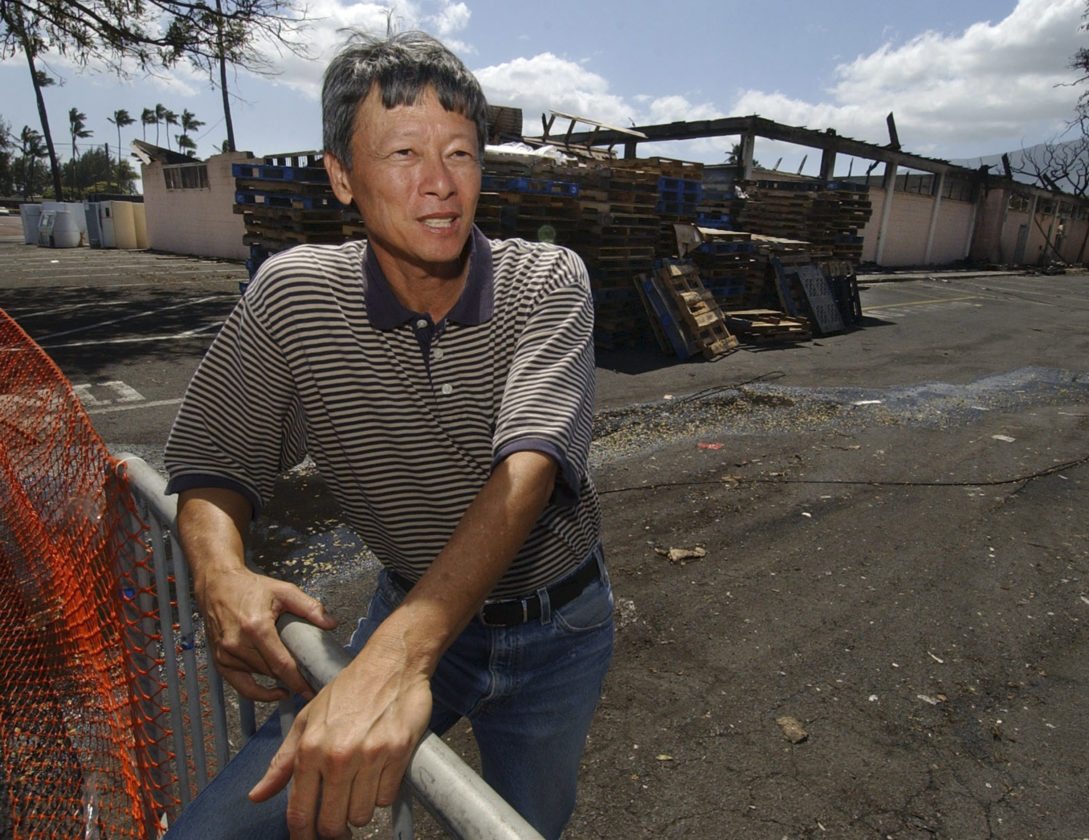 Ah Fook’s Supermarket President Raymond Hew stands in front of what was left of his business after a fire on Feb. 27, 2005, at the Kahului Shopping Center. The market moved into its corner spot at the shopping center in 1955. Hew relocated the market into a smaller spot at the shopping center. Ah Fook’s has been sold to Michele Pomroy Fraser, whose family owns and runs Kahului Carpet & Drapery. • The Maui News / MATTHEW THAYER photo

KAHULUI — Another old Maui business has left the scene with the sale of the century-old Ah Fook’s Supermarket in the Kahului Shopping Center.

The sale price was not disclosed. Fraser said she bought the lease and assets but not the corporation.

The market has been renamed Maui Style Market.

“It’s something that had to be done sooner or later,” said former supermarket President Raymond Hew of the sale Tuesday. Hew is the nephew of Tam Ah Fook’s wife, Margaret Tam, and part owner of the market with the Mizoguchi family. 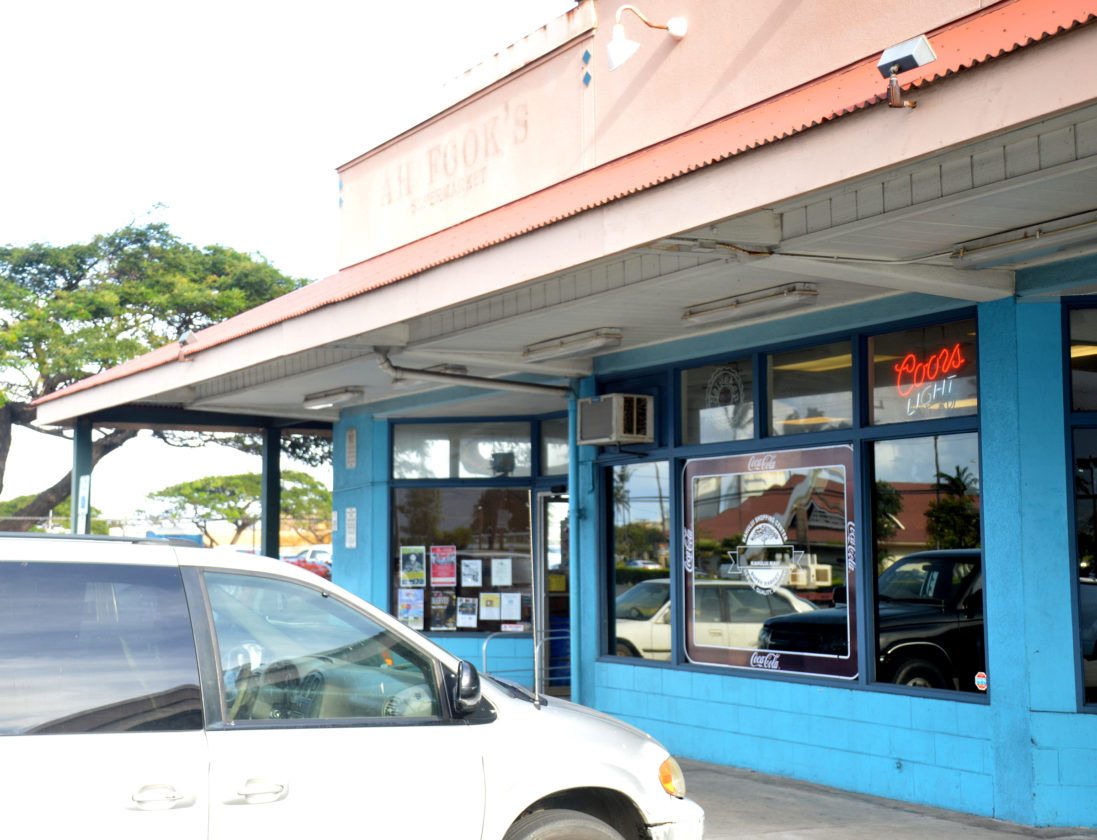 Ah Fook’s, which once had a full-sized supermarket at the Kahului Shopping Center, moved into this smaller location in the same mall about nine years ago. A fire destroyed the original mall location. The supermarket with roots that go back 100 years has been sold. • The Maui News / BRIAN PERRY photo

He said there was no one left to take over the business, which originally opened in 1917 on the Kahului Harbor side of Kaahumanu Avenue across from the current Burger King. In 1955, the store opened at Kahului Shopping Center.

“When this opportunity came up, we decided to sell,” Hew said.

“It was just a plus we could sell it to a local, longtime (Maui) family,” he later added.

On Tuesday, Hew still was at the market, noting that he will be around to help the new owners in the transition. In fact, he was cutting fish for the store’s poke.

Fraser, who busily roamed the store’s backrooms Tuesday, said she is retaining all employees — including some Ah Fook family members — and the product line heavily laced with ethnic local food, as well as Ah Fook’s special sauce and shirts.

“We are not going to change anything, same employees, same faces,” said Fraser, who is a vice president of the 44-year-old Kahului Carpet & Drapery. She and her husband, Austin, also own Maui Jumpy Castles & Tent Rentals and formerly owned and ran Titilua’s Store and Titilua’s Shave Ice Truck.

Her future plans include expansion into the old Kahului Carpet & Drapery showroom next door for more food offerings and a jewelry line. Kahului Carpet currently is located in another location in the mall, in the old Fun Factory spot nearest Kamehameha Avenue.

She also plans to add more flowers, poke and fish and a deli and to bring in Polynesian goods and Tahitian pearl jewelry she used to sell under the Heavenly Maui’s Hawaiian Jewelry brand.

Fraser brought in Shal Dooge, who has experience in small market businesses and is the former longtime manager of Haiku Grocery, to manage the day-to-day operations.

Like the Hew family, the Pomroys have deep roots on Maui with ties to the Richardson family in Waikapu and the Espinda family in Lahaina who date back to the 1800s, the new owners said. Mel Pomroy, Fraser’s father who started the carpet business and serves as his daughter’s consultant, said “having roots deep, we are so blessed, we are fortunate to have the opportunity to continue” the legacy of Ah Fook’s.

“My daughter and I, we’re just so honored to be able to continue aloha and goodwill that is fast disappearing from Maui,” he said Wednesday.

“My daughter and I have been walking the aisles and taking (customers’) suggestions,” Pomroy added. “We welcome any suggestions from the people of what they think we should have.”

While the new owners plan for growth, Hew will take a slower approach to life, at least in the beginning. At 69 years old, Hew said he is ready to do the “mundane things, like play another day of golf, work in the yard and stuff like that.”

Hew worked at the supermarket as a high schooler during summers and has been full time since 1979. He attended University of Hawaii at Manoa in the ’70s, received a business management degree, and worked at a bank on Oahu. He came back to Maui in 1979.

Over the years, Hew said the work has been pleasurable, even with the long hours and having to come into the store on days off. He enjoyed helping people and offering employment to hundreds of people through the years.

At the height of the business, Hew said there were about 75 employees at the market’s original spot at the Kahului Shopping Center, which currently houses vehicles behind a fence north of the current location. It was a larger supermarket, a cornerstone of the mall.

But a fire on Feb. 27, 2005, destroyed the supermarket and other structures in the Kahului Shopping Center. Ah Fook’s reopened later that year in an old building that has since been torn down at the current Bank of Hawaii location in Kahului.

About nine years ago, Ah Fook’s returned to the Kahului Shopping Center in its smaller current location with a workforce of 10 people.

“It’s not the same. The store is small. We don’t have the things people want,” Hew said.

Gone are the full-service meat and fish departments and displays. The produce section has been reduced to a couple of refrigerated shelves.

The most sought-after items in the old store were the prepared foods, such as the breakfast bentos and lunch items. The old store had a full kitchen that could produce those items but the current location does not.

Looking back at the fire, Hew said the experience was “kind of surreal.”

“It happened, but it was hard to believe that it actually happened. It put a lot of folks out of work,” he said.

Some customers, especially senior citizens, had trouble finding a new supermarket. Ah Fook’s was one of the first businesses not to charge senior citizens the excise tax on groceries, a policy it continued in the current location.

Hew said he didn’t dwell on the fire and the devastation, focusing instead on the next steps for Ah Fook’s. He was “on the border line” of ending the business.

Ah Fook’s found its niche in the local culture.

“We wanted to be part of the community. We just felt that’s one of the things we wanted to try to do,” Hew said.

“I think we concentrate on ethnic foods, whether it be Japanese, Thai, Vietnamese or Chinese,” he said. “We always believed the store . . . should help perpetuate the culture, by carrying local stuff, doing local products.”

Of course, there was fresh cut flowers that the older folks sought out to place on graves of loved ones.

“We cannot get enough flowers at times,” Hew said, adding that flowers sell out during special occasions such as Mother’s Day, Memorial Day and New Year’s.

Besides finding a niche with flowers and groceries, Hew said the market stressed “friendly service.”

“People shop at our store, a lot of people are talking stories with each other,” Hew said. “It’s not only a place to pick up your groceries. It’s like a social gathering place also.”

Hew looked back fondly at his years at the helm of Ah Fook’s.

“It was truly a pleasure to serve the people of Maui. It’s a little sad another local business has (ended),” Hew said. “It’s been a great ride, eventually some things got to end.”

Ah Fook’s, which once had a full-sized supermarket at the Kahului Shopping Center, moved into this smaller location in the same mall about nine years ago. A fire destroyed the original mall location. The supermarket with roots that go back 100 years has been sold. • The Maui News / BRIAN PERRY photo

Casey Brummel, a former Baldwin High School teacher who is charged with sexually molesting a student, was arraigned in 2nd Circuit Court on Wednesday. He pleaded not guilty to four counts of third-degree sexual assault. • The Maui News / LILA FUJIMOTO photo

Ah Fook’s Supermarket President Raymond Hew stands in front of what was left of his business after a fire on Feb. 27, 2005, at the Kahului Shopping Center. The market moved into its corner spot at the shopping center in 1955. Hew relocated the market into a smaller spot at the shopping center. Ah Fook’s has been sold to Michele Pomroy Fraser, whose family owns and runs Kahului Carpet & Drapery. • The Maui News / MATTHEW THAYER photo