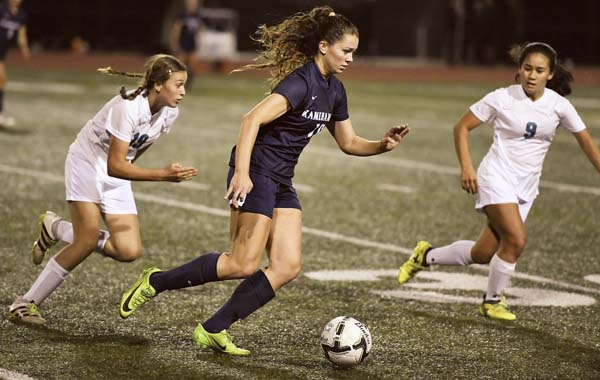 PUKALANI — At the midway point of the Maui Interscholastic League girls soccer season, the race is most assuredly on.

King Kekaulike High School and Kamehameha Maui battled to a scoreless tie on a chilly night at Kanaiaupuni Stadium, leaving the two teams that represented the MIL in the Division I state tournament last season separated by three points in the standings.

The Warriors sit atop the standings at 4-0-1, while defending champion Na Alii are 3-1-1.

Both teams challenged down the stretch and the tie was preserved in the closing seconds on a solid save by King Kekaulike goalkeeper Kiralynn Pu. Earlier in the second half, Pu made a stellar save on a shot by Takara Lee Kiesel.

“We knew when we came here at their field, we knew we were going to be faced with a strong game from Kamehameha,” King Kekaulike coach Gundi Dancil said. “They’ve been playing well, they’ve been firing on all engines. What we saw tonight is we are starting to get that gel that we have been working on. We feel good about it. That’s our best match, they came out to play, both sides.” 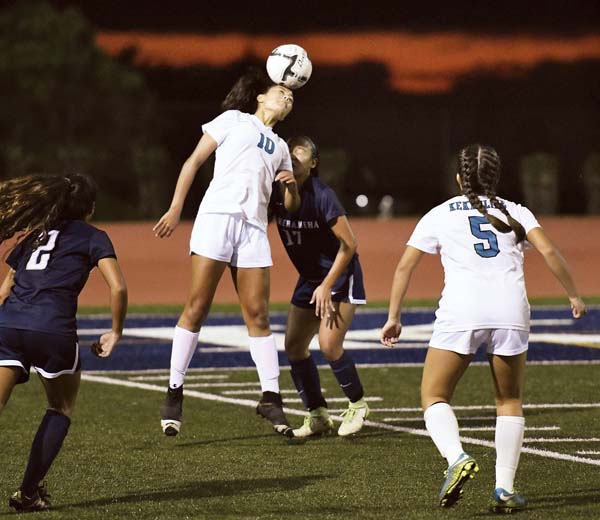 “We’re OK, we make it out of the first round undefeated,” Kamehameha coach Brandon Kotter said. “Playing a home game, that was the goal, but we know now that the target is on our back. So, here we go, round two.”

Kamehameha Maui’s Bailey Ventura fired an open shot just over the crossbar in the 58th minute, and Warriors goalkeeper Carley Martin made a nice save in the 62nd minute.

Pu then made the spectacular save in the 66th minute on Kiesel.

“That was the absolute game-saver for them there,” Kotter said. 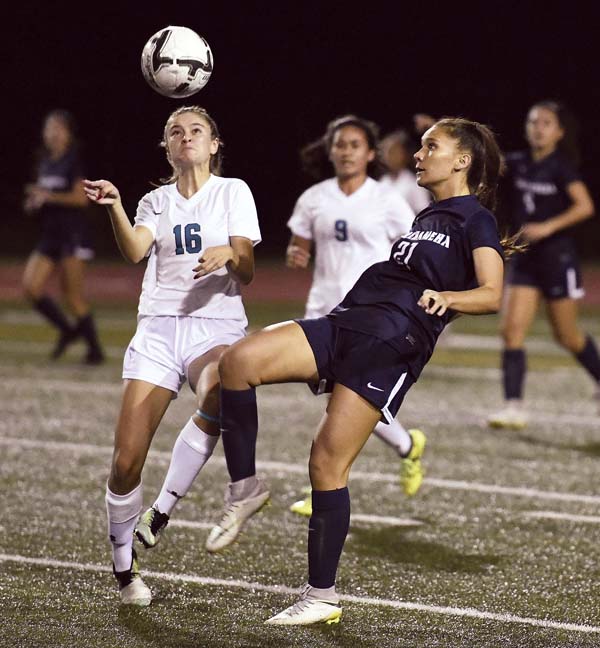 The Warriors’ Kaena Kehano (right) and Na Alii’s Zoe Rehrer compete for the ball in the second half. -- The Maui News / MATTHEW THAYER photo

Kotter is happy to be in the driver’s seat, but he knows every match from here on out will be large.

Kamehameha Maui played Robynn Yoshida in goal in the first half and Martin in the second half. Both made their share of saves behind a solid defense.

“The big thing for us was not to give them anything free,” Kotter said. “So second half, keep it on the other side of the field and just keep pressing them.”

The pressure worked out in the end.

“That was the goal because we know how hard they work,” Kotter said. “King Kekaulike has a tremendous work ethic, but we’ve been busting our butts as well.”

The Warriors’ Kaena Kehano (right) and Na Alii’s Zoe Rehrer compete for the ball in the second half. — The Maui News / MATTHEW THAYER photo