‘Come to the cabaret, old chum’

Germany circa 1931 falls, as Nazism rises in ‘Cabaret’ 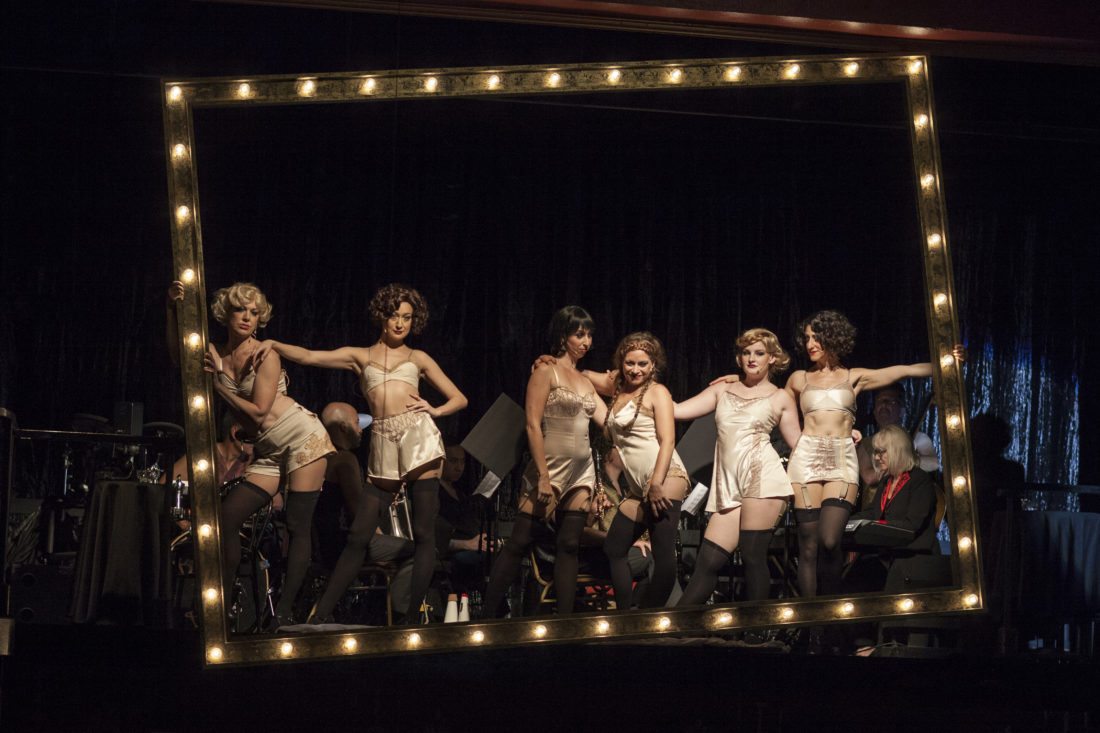 There is no curtain at the Historic Iao Theater in Wailuku, but moments after the theoretical curtain rises on “Cabaret,” audiences know that they are in for something very, very special. Starting with a drum roll and ending in dead silence, Kalani Whitford’s considerably darker staging of this classic musical dazzles, surprises, amuses, alarms and saddens. Collectively it will leave one deeply moved and perhaps frozen in your seat, yet stimulated to discuss what it was that you just experienced.

Bennett Cale’s performance as the Emcee is a masterpiece from the moment he takes the stage with the thrilling “Willkommen” to the haunting “End of Show” reprise. Cale’s mysterious and debaucherous portrayal owes much to why this avant-garde Maui OnStage production works so well.

Into the world of the Emcee, and the equally iniquitous Kit Kat Klub, enters Clifford Bradshaw, a young American writer played pragmatically by Stephen Webb. It is here that we learn that Cliff has a wild side, too, further ignited by his pairing with Sally Bowles (Lin McEwan), star of the Kit Kat Klub. McEwan herself gives a star performance in this rich and poignant role with an inimitable and inspired artistic interpretation. Not every musical on Maui receives applause after every song, but “Cabaret” does, especially immediately following McEwan’s “Mein Herr,” “Maybe This Time” and the astounding “Cabaret.”

The depth of talent in “Cabaret” is another big reason that this production captivates from start to finish. David Belew as Ernst Ludwig and Madame Donut as Fraulein Kost excel in the distressing and somewhat shocking ending to Act 1. Dale Button and Marsi Smith are endearing as Herr Schultz and Fraulein Schneider and are in many ways the human heart of “Cabaret.”

“Cabaret,” in my opinion, is the best production of the entire season thus far, but like Maui OnStage’s production of “RENT” several years ago, its somewhat disturbing adult content may not appeal to all audiences, and I don’t feel that it is appropriate to be seen by children. That said, the emotional roller coaster it affords — combined with an exquisite set, lighting and costumes by Ally Shore, Ricky Jones and Sarah Loney Mark, respectively — arguably designates “Cabaret” as Maui OnStage’s finest production of the decade.

• Maui OnStage continues “Cabaret,” music by John Kander, lyrics by Fred Ebb, book by Joe Masteroff. The local production is directed and choreographed by Kalani Whitford, under the musical direction of Steven Dascoulias. Performances are at 7:30 p.m. Fridays and Saturdays and 3 p.m. Sundays through March 18 at the Historic Iao Theater. Tickets range from $20 to $40. To purchase tickets for any Iao Theater event call 242-6969 or order online at www.mauionstage.com.