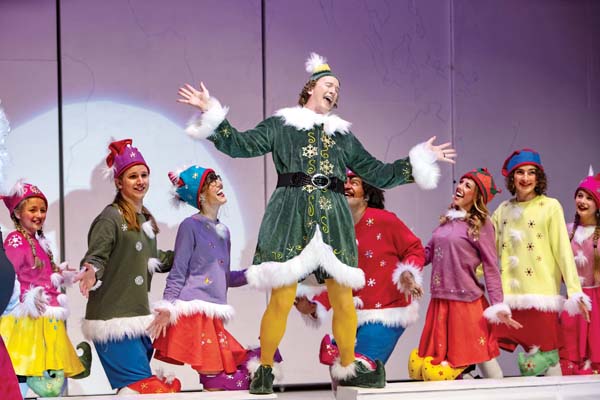 I said in 2015 that “Elf the Musical” should never be mounted again on Maui without Ricky Jones as Buddy the Elf. Thankfully Jones has returned and, in fact, surpasses his previous performances.

This elaborate production, with an all-new, clean-lined, metropolitan set by Caro Walker, transitions seamlessly to dozens of locations. Director Dale Button triumphs with his fresh and unpredictable “Elf,” which improves upon previous productions.

The show begins with Buddy discovering he is not an elf, he is human. He ventures from the North Pole to New York City to find his biological father, Walter Hobbs (Bennett Cale).

Walter’s wife, Emily (Lisa Teichner) and son Michael (Ethan Tyler Baysa) are deeply disappointed when he cancels a family day of Christmas shopping. Walter explains that Christmas gets “In the Way,” a wonderfully relevant song, sung by Cale, Gabby Anderman (Cale’s real-life spouse who portrays Walter’s secretary, Deb) and the employees of Greenway Publishing. Anderman is a delight to watch on stage, and adroitly matches Jones’ over-the-top comical abilities and energy throughout the show.

In addition to the Hobbs family and the Greenway staff, the employees at Macy’s Department Store have lost their Christmas spirit. As Buddy is left at Macy’s by a couple of New York’s finest, he introduces “Sparklejollytwinklejingly” to the jaded retail staffers. This bubbly “Elf” highlight is the song you will have stuck in your head over the holidays.

Next, at the Hobbs’ house, Michael and Emily sing “I’ll Believe in You,” adding two cheerful portrayals in this very sweet scene as they convey in a letter to Santa that they want Walter to spend more time with them.

Meanwhile, Buddy quickly falls for Macy’s co-worker, Jovie (Carlyn Leal), and eventually talks her into an “eating food” date over “the world’s best souvlaki” from a street vendor (Shane Borge). Later at the Rockefeller Center ice rink, Buddy cracks through Jovie’s icy exterior as they sing “A Christmas Song,” loud for all to hear.

The second act opens at the only place open late on Christmas Eve in Manhattan — a Chinese restaurant. In “Nobody Cares About Santa” — the most crowd-pleasing showstopper — a gaggle of faux-Santas, including a yarmulke- wearing Jewish Santa (Larry Feinberg), long for the glory days of playing jolly St. Nick.

My personal favorite song from three years of “Elf” productions is still “Never Fall in Love (With an Elf).” The clever, jazzy Ella Fitzgerald-like torch tune is impeccably performed by Jovie.

“Elf’s” exclamation point number, “The Story of Buddy the Elf,” is filled with more harmonies than I could keep track of, masterfully executed by the full cast. In this superior vocal stage moment, Walter must deliver an out-of-the park book pitch to Mr. Greenway (David Negaard) or be fired on Christmas Eve. Meanwhile, the real Santa, hysterically portrayed by Dean Watt, is stuck in Central Park.

“Elf’s” two finales are show- stoppers in their own right — from the heartwarming “A Christmas Song (reprise),” where 70 or 80 light-up elf hats twinkle throughout the audience, to the “Sparklejollytwinklejingly (reprise)” at the North Pole.

Enchanting, colorful costumes by Vicki and Jessi Nelson amplify the joyfulness at show’s end, as does a Buddy, Jr. baby cameo (portrayed by different babies throughout the run) and falling snow flurries. Button, along with an outstanding orchestra led by Kim and Dick Vetterli and the multi-talented cast, have delivered a wonderful holiday gift for Maui families — but based on the sizeable crowds and the buzz, you’ll need to get tickets right away!

• Maui OnStage continues “Elf The Musical” through Sunday, Dec. 9 at the Historic Iao Theater in Wailuku. Performances are 7:30 p.m. Fridays and Saturdays; a special 2 p.m. performance is set for Saturday and Dec. 8., with a special 6 p.m. performance on Sunday; the show closes with a 3 p.m. performance Dec. 9. Tickets range from $20 to $40. To purchase tickets for any Iao Theater event, call 242-6969 or order online at www.mauionstage.com. Members of the cast will also be performing excerpts from “Elf” on the Queen Ka’ahumanu Center stage in Kahului at 11:30 a.m. Saturday.