Get ready for a wild comedy ride 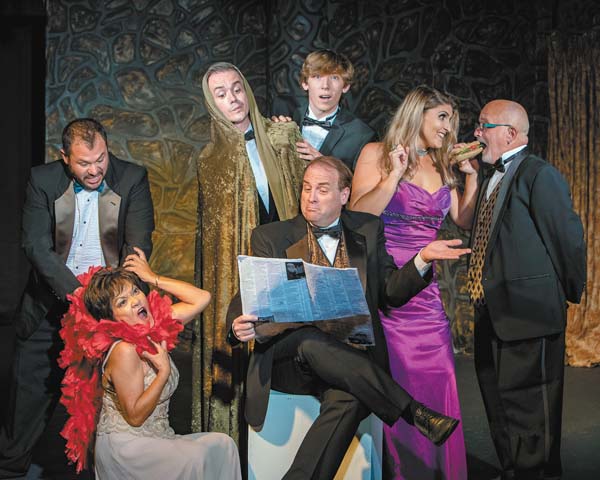 Back row, from left: John Galvan, Logan Heller, Elisha Cullins, Sharleen Lagatutta and Vinnie Linares. Front row, from left: Kathy Collins and David Belew star in ProArts’ “It’s Only A Play” by Terrance McNally, directed by Francis Taua. Performances are at 7:30 p.m. Thursdays through Saturdays, 3 p.m. Sundays, beginning Friday, and running through Jan. 27 at the ProArts Playhouse, Azeka Place Makai in Kihei. Tickets are $26 for adults, $15 for drama students. For more information or to purchase tickets for any ProArts event, call 463-6550 or visit www.proartsmaui.com. Jack Grace photo

Like “42nd Street” and “A Chorus Line,” Terrance McNally’s “It’s Only A Play” is a behind-the-curtain look at what it takes to put on a Broadway production. Unlike those dramatic musicals, “It’s Only A Play,” which opens at the ProArts Playhouse this weekend, is a wild comedy ride.

Julia Budder (Sharleen Lagattuta) is a first-time Broadway producer of “The Golden Egg,” a play by Peter Austin (John Galvan), its panicky playwright. Budder is the hostess of an opening-night party at her posh Manhattan apartment where she waits for the New York early a.m. reviews to come out.

Her guests include Peter’s best friend James Wicker (David Belew), a bigheaded television actor and Pilates classmate of Ryan Seacrest; Virginia Noyes (Kathy Collins), the self-indulgent, aging star of the play who is required to wear an ankle monitor; Frank Finger (Logan Heller), the wunderkind British director of “The Golden Egg”; Ira Drew (Vinnie Linares), a timid theater critic who secretly yearns to be a playwright; and Gus (Elisha Cullins), an “actor-slash-singer-slash-dancer-comedian-slash-performance artist-slash-mime,” who is temporarily checking coats at the party.

Its true achievement came as a popular community theater offering throughout the 1990s and into the 21st century. Rewritten again in 2014, it finally hit Broadway where it ran for over a year, in part due to an all-star cast that included Megan Mullally, Matthew Broderick, Nathan Lane, Stockard Channing, Rupert Grint, F. Murray Abraham and Micah Stock.

McNally has since updated his script, yet again, for timelier pop culture references, and ProArts will be presenting the latest version. In the show, most everything that could go wrong does at Budder’s opening night soiree.

“I was in a problematic production of ‘Gypsy’ in college,” answered director Francis Taua when I asked if he had ever been in a Golden Egg-ish flop. “The lamb died during the show — on stage! Then the actress that played Gypsy Rose Lee was bit by a horse at a petting zoo. It bit half of her ear off.”

I asked Taua why he chose to direct the play.

“I didn’t know it, but I knew Terrance McNally. When Kristi (Kristi Scott, managing director of ProArts) gave it to me, I began reading it right away. By the time she had returned from lunch I said, ‘Yes!’ It makes fun of everybody in every capacity of theater,” Taua explained.

I asked him about the importance of timing in a farce.

“It goes so quickly, like ‘Who’s on first.’ I knew I needed a cast that was quick and I thought of Shar (Lagattuta) right away.”

Taua explained the difficulties of directing timing-based comedy and praised the cast.

“It’s a lot of starting and stopping — trying to find the beats. But this cast is so awesome — I kind of started staying out of their way. They find new things at every rehearsal, and every time something isn’t working, they acknowledge that before I can even intervene.”

I asked why audiences should see this production.

“Everyone wants to have fun at the top of the year, and this show brings it. There is literally something for everyone that will make you laugh,” he added.

King Kekaulike High School presents “Groovy!,” directed by Chris Kepler. Set in 1969, three college students decide to throw a free music, beads and flowers celebration at Crumb’s Apple Farm. Everything is “groovy” until a local resident, who hates “the love generation,” demands that the police shut down the festival. Pop and rock songs from the 1960s make for a fast-paced and fab youth musical.

• Performances are at 7 p.m. Fridays and Saturdays, Jan. 18 through 26 and 3 p.m. Sunday, Jan. 27 at the King Kekaulike Performing Arts Center on the King Kekaulike High School campus in Pukalani. Tickets are $10 for adults and $6 for students, and are available at the box office 30 minutes before show time. For more information visit www.kingkekaulike.com.

“One of the highlights for me in the past festivals backstage was seeing the kids huddled in the wings watching with such enthusiasm other kids perform. For kids to see the diversity of material and the quality of expertise on this small island, it’s inspirational,” says Seabury director of dance David Ward.

• Performances are at 7 p.m. Saturday, Jan. 19 and 3 p.m. Sunday, Jan. 20 at the ‘A’ali’ikuhonua Creative Arts Center on the Seabury Hall campus in Makawao. Tickets are $12 for adults, $10 for seniors and $5 for students and children. For more information or to purchase tickets, visit www.seaburyhall.org.

“PolySHAMory,” written and performed by Kate Robards, is a riveting and wickedly funny award-winning new solo play in which Robards embarks on an exploration of self-discovery and true love through a polyamorous relationship.

In a world premiere at the festival is “Cane Fire: The Hanapepe Massacre,” by local playwright Wayne Moniz. This historical tragedy chronicles the 1924 sugar mill strike of 500 Kauai Filipino workers who went on strike for a raise of $2 a day.

• Performances begin at 6:15 p.m. Friday, Jan. 18 and continue through Sunday, Jan. 20 at the Historic Iao Theater in Wailuku. Tickets are $15 per show with a limited number of $75 VIP passes available by phone only. For the complete festival schedule or to purchase tickets, visit www.mauionstage.com or call 242-6969. The Maui Fringe Theater Festival contains adult content and some shows may not appropriate for children.

Catch “Anjelah Johnson: More of Me Tour” at 7:30 p.m. Friday, Jan. 18 in Castle Theater at the Maui Arts & Cultural Center in Kahului. A former cast member of “MADtv,” Johnson’s comedy sketch, “Bon Qui Qui,” where she plays a disgruntled fast food employee, has been viewed by over 75 million people.

As her signature character, she’s released Bon Qui Qui songs, albums and music videos. The comedian and actress has also appeared in several comedy specials for Comedy Central and Netflix, along with the film “Mom’s Night Out.”

The daring acrobats, jugglers, balance artists and contortionists of “The New Shanghai Circus” return for their annual engagement at the MACC. Rooted in more than 2,000 years of Chinese circus traditions, this is a fun-for-all-ages event.

Enjoy an evening with “David Sedaris.” One of America’s preeminent humor writers, Sedaris will be offering a selection of all-new readings, an audience Q & A session and a post-show book signing.

• Performance is at 7:30 p.m. Wednesday, Jan. 23 in Castle Theater at the MACC. Tickets range from $32 to $62 (plus applicable fees). For more information or to purchase tickets, visit the box office, call 242-7469 or order online at www.mauiarts.org.