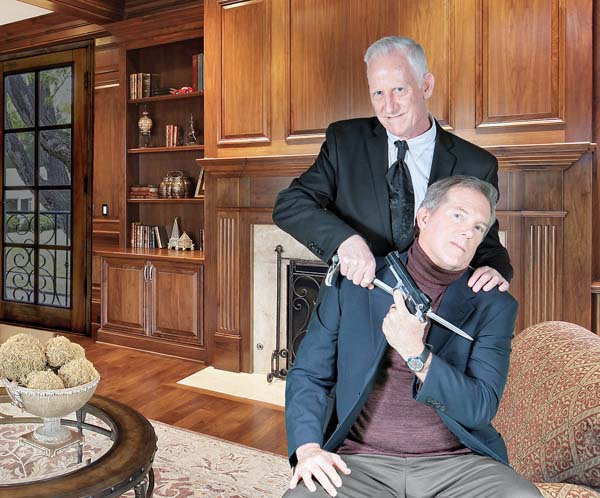 Dale Button (standing) and Brian Connolly star in ProArts production of “Sleuth.” Performances are at 7:30 p.m. Thursdays through Saturdays and 3 p.m. Sundays, opening Friday and running through June 23 at the ProArts Playhouse in Azeka Shopping Center Makai in Kihei. Tickets are $26. For more information or to purchase tickets for any ProArts event, call 463-6550 or visit www.proartsmaui.com. Jack Grace photo

Previewing and reviewing mystery plays with their precisely crafted puzzle, dependence on twists and turns and reversals of fortune is a conundrum for theater writers. To share even a vague outline of plot development with the reader is a major risk in spoiling an audience’s experience.

ProArts has presented several mysteries and thrillers in the past, but perhaps none as reliant upon secrecy as Anthony Shaffer’s “Sleuth,” which opens at the ProArts Playhouse in Azeka Shopping Center Makai in Kihei this weekend.

In this ultimate game of cat-and-mouse, Andrew Wyke (Dale Button), a celebrated British mystery writer, invites Milo Tindle (Brian Connolly) to his cozy English country house in order to confront Tindle on the extramarital affair between Tindle and his wife Marguerite (unseen in the play).

Wyke’s home echoes his obsession with murder mysteries and fascination with games. “Sleuth’s” author Shaffer mirrored that aspect of Wyke’s personality on a friend, composer Stephen Sondheim, who is apparently intensely competitive in game-playing.

Tindle is surprised to find out that Wyke has a mistress of his own, and is more than happy to have Marguerite taken off his hands. Knowing that Tindle is unable to support Marguerite in the lifestyle to which she is accustomed, Wyke proposes a plan to stage a robbery of her jewelry. Tindle will have the jewels to sell, and Wyke will be rid of his expensive wife while at the same time be able to cash in a large insurance settlement.

The proposal sets off a chain of suspenseful events that will have the audience thinking they have “Sleuth” all figured out.

“This is my directorial debut,” says Jason Strahn, director of the show. “I’ve always enjoyed good murder mysteries — they are kind of like a challenging puzzle in which you never get to see the whole picture.”

I asked if he had a favorite moment in the play.

“I don’t have a specific favorite moment,” reflected Strahn. “The play is written so well that many seemingly insignificant moments are actually some of the biggest clues. It really requires a keen detective’s eye to see everything.

” ‘Sleuth’ is a different animal than many of the other recent plays on Maui. The play itself encourages audiences to solve the mystery — or at least try to — and every time you see the play, you will see new clues that you missed the first time around. Like Sherlock Holmes says, ‘There is nothing more deceptive than an obvious fact.’ “

I asked Strahn if it was essential to keep all of “Sleuth’s” twists and turns a secret.

“Well there aren’t many twists in this murder mystery — obviously the butler does it,” he bemusedly offers.

In 1971, “Sleuth” received the Tony Award for Best Play, which Shaffer quickly adapted into a screenplay for the 1972 film starring Laurence Olivier as Wyke and Michael Caine as Tindle. Both actors were nominated for Academy Awards in the equally successful film version.

Thirty-five years later, the film was re-made by Kenneth Branagh, this time with Caine as the older Wyke and Jude Law as Tindle; but the re-write by Harold Pinter did not fare as well as Shaffer’s original work.

I asked Button and Connolly why they chose to perform in “Sleuth.”

“I read the script and knew that I had to do this,” shared Button. “It’s a real challenge. I think I have a billion and three words in the show.”

“This is a very hard show to do. It’s a draining and exhausting show — both mentally and physically,” added Connolly. “I’ve been the lead or the principle in 21 shows, and ‘Sleuth’ is the most challenging show I’ve ever done.”

Connolly is also helming the fight choreography on “Sleuth.”

“I’ve done seven shows with Dale, and it was super important to be able to rely on him. I trust Dale,” expressed Connolly. “He does the fight scenes exactly the same way every night. That’s how everyone stays safe. When you change something, that’s when people get hurt.”

I asked why Maui audiences should see “Sleuth.”

“It’s an emotional rollercoaster. It will draw so much of your attention, you may want to scream out, ‘No, don’t do that!’ to the stage,” explained Strahn.

“I don’t think anyone has ever seen me do a role like this. This is ‘Dale’s dark side,’ and it’s different than any theater that’s been done on Maui for a long time,” added Button.

“This is not dinner theater. This is a legit English murder story. ‘Sleuth’ is for people that like that genre. I almost wish I could be watching it happen live instead,” concluded Connolly.