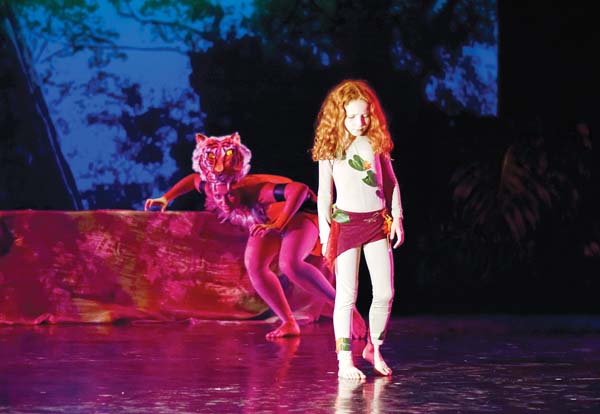 Their rival, Shere Khan the tiger, fiercely performed by choreographer Yasmine Lindskog on opening night, is repelled in the battle, establishing the tension of the tale and artfully foreshadowing an inevitable grudge match.

One of the most impressive aspects of “The Jungle Book,” created by AAPA Artistic Director Amelia Couture, is how skillfully the story is clearly told through movement alone.

In Scene 2, we meet the child Mowgli, endearingly performed by Calilynn Salzer on opening night, and Baloo the bear (Ki’tsai Zangpo). Salzer and Zangpo were immensely engaging, and together demonstrated the trust essential to dance. This equally challenging choreography by Hunt implied everything you needed to know about this unlikely friendship. The diminutive Salzer effortlessly leaped and climbed on and off of the twice her size Zangpo, who gracefully supported this challenging dance duet.

In Act 2, Bagheera (Amelie Wertheim on opening night), the panther that rescued Mowgli from certain death, returns the man-cub to the Village of Men. In a lovely farewell moment choreographed by Couture, Wertheim conveyed convincing cat mannerisms of affection.

A trademark of AAPA productions are the processions that allow all dancers, some as young as age 5, to showcase their dance levels as well. Couture enables this with group pieces, which incorporate a variety of dance styles, with bears, leopards, butterflies, flowers, bees, peacocks and monkeys. The addition of the villagers enlarges the scope of the ballet. Wonderful understated costumes by Chelsea Fine and beautiful masks with glowing eyes also enhance “The Jungle Book’s” level of quality.

A final battle between Shere Khan and the ensemble of animals choreographed by Couture is a fitting bookend to the opening fight sequence, but appropriately larger in scale and dramatically enhanced by Todd Van Amburgh’s lighting design. Alexander Academy’s five months of rehearsals and its attention to detail is why these productions are so well-executed and something more than a youth ballet.

Maui OnStage’s ONO! series returns with a staged reading of “Meteor Shower” by Steve Martin, featuring Megan Caccamo, Dylan Bode, John Williams and Joanna Zamir. This 2017 Tony-nominated absurdist couple’s comedy by the legendary comedian, actor and writer contains adult themes and language that may not be appropriate for all audiences.

* The performance is at 6:30 p.m. Monday at the Historic Iao Theater in Wailuku. The free ONO! events happen every second Monday of the month. For more information, visit www.mauionstage.com.