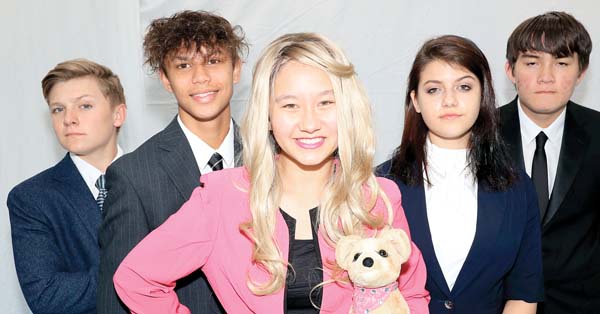 As is always the case with theater on Maui, it’s either feast or famine. Following a quiet June, three youth theater productions — “Legally Blonde JR.,” “Disney’s Frozen JR.” and “Disney’s My Son Pinocchio, JR.” — featuring more than 120 students are set open next week in Lahaina, Makawao and Wailuku.

Up first and opening on Thursday, July 18 is Theatre Theatre Maui’s “Legally Blonde JR.,” which follows the transformation of Elle Woods (Chloe Chin) as she tackles stereotypes, snobbery and scandal in pursuit of her dreams.

The girls of Delta Nu are celebrating the “engagement” of Warner Huntington III (Landon Long) to their perky, sweet and strikingly blonde sorority president, Elle Woods. When Warner tells Elle that he needs someone more serious and decides to break up, she chooses to take matters into her own hands by crafting a showy song and dance personal essay and charms her way into law school with Warner.

Elle’s new snobby classmates disapprove of her immediately. The only person who is willing to help is law teaching assistant, Emmett Forrest (Noah Schwartzlow) and a spunky beautician named Paulette (Tessa Chin).

In time, Elle assesses her priorities and realizes her obsession with Warner is holding her back from earning respect. Freed from her need to please Warner, she earns a spot as a student assistant on Professor Callahan’s (Jacob Jerome) defense case of fitness queen Brooke Wyndham (Ella Briggs). 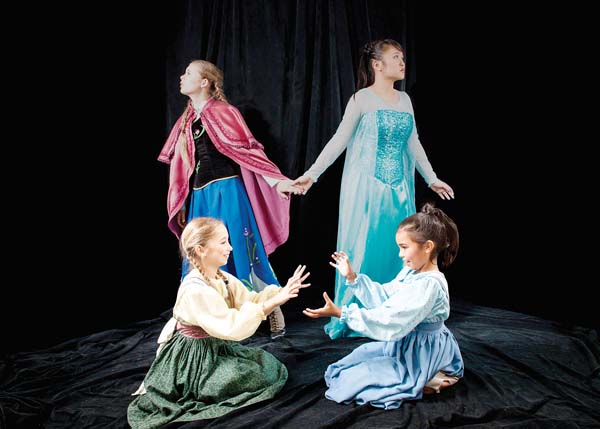 Elle finds that books and looks aren’t mutually exclusive, realizing that law may be her natural calling.

“It is a very high energy show. We chose it for the number of parts and opportunities for lots of kids to have a moment,” says Director Kristi Scott.

I asked if the kids were enjoying this more mature musical.

“They are having fun with the idea of going for what you want. The love aspect appeals to the older kids, the littles like the music and girl power,” said Scott. “It’s a story of a girl learning to let her real self shine — that it’s OK to be smart and driven.

“I believe in the power of theater in kids’ lives. I’ve seen kids blossom year to year, and get real joy watching them find themselves and discovering what they can do. 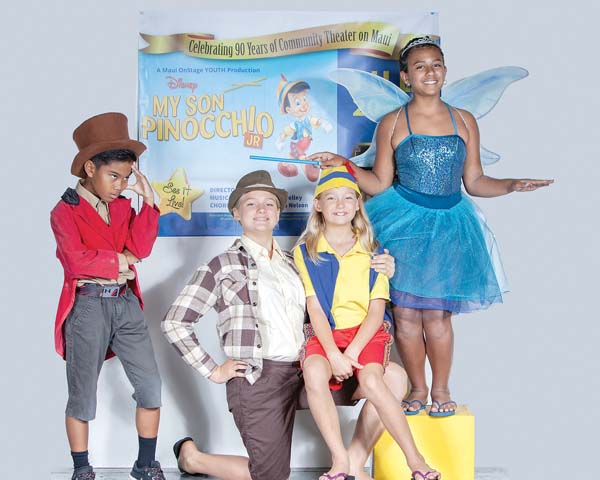 Ethan Baysa (from left), Anuhea Hale, Poli‘ahu Hale and Madison Cordeiro tell the tale of the puppet who wants to be a real boy from Geppetto’s perspective in “Disney’s My Son Pinocchio JR.” opening July 20. Jack Grace photo

“And, bonus, I get to work with an amazing team — Annabehl Sinclair-Delany, MaryBeth Chin, Vania Jerome, Felicia Chernicki-Wulf and Francis Taua. They all create magic in their own way and are such a blast to work with.”

• Theatre Theatre Maui presents “Legally Blonde Jr.,” music and lyrics by Laurence O’Keefe and Nell Benjamin, book by Heather Hach, directed by Kristi Scott, choreographed by Felicia Chernicki-Wulf and under the musical direction of Vania Jerome. Performances are at 7 p.m. Thursday through Saturday and 2 p.m. Sunday, July 18 through 21 in the Haleakala Ballroom at Westin Maui Resort & Spa in Kaanapali. Tickets are $15 for ages 13 and older, $9 for ages 6 to 12 and $5 for ages 3 to 5. Children ages 2 and younger are admitted for free. Tickets are available in advance from Lahaina Music or at the door one hour prior to performances. For more information, contact Theatre Theatre Maui at 661-1168 or visit www.ttmwestmaui.org.

A story of true love and acceptance between sisters, “Frozen JR.,” brings Elsa (Jena Mukai), Anna (Dakota Welch), Kristoff (Preston Summit), Hans (Carver Glomb), Sven the reindeer (Calilynn Salzer) and Olaf (Elias Tokuoka) the snowman to life on stage, and expands upon the emotional relationship and journey between the Princesses of Arendelle. When faced with danger, they discover their hidden potential and the powerful bond of sisterhood. 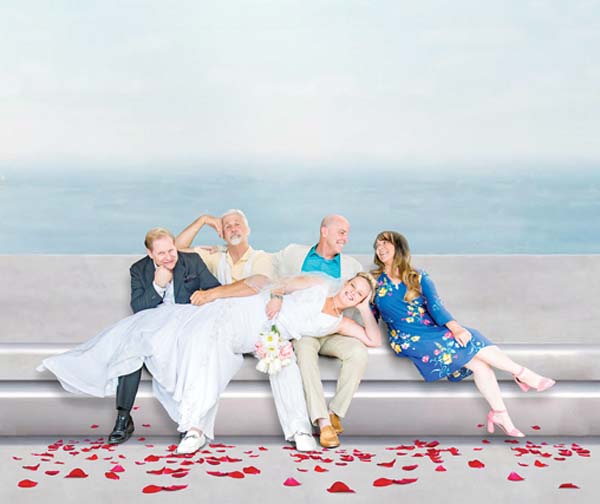 In 2014, Idina Menzel appeared on Charlie Rose, and he asked when the newly released “Frozen” would be adapted for Broadway.

“Give it a minute,” sarcastically replied Menzel.

It took Disney Theatrical Productions more than a minute, but “Frozen” was warming up for Broadway in Denver by 2017, opened in 2018, released the rights for youth productions in 2019 and MAPA quickly and wisely grabbed the chance to present its Hawaii premiere.

• Maui Academy of Performing Arts presents “Disney’s Frozen JR.,” original music and lyrics by Kristen Anderson-Lopez and Robert Lopez, book by Jennifer Lee, directed by Hoku Pavao Jones, assisted by David C. Johnston, choreographed by Kathleen Schulz and under the musical direction of Beth Fobbe-Wills. Performances are at 7 p.m. Fridays; 4 and 7 p.m. Saturdays; and 1 p.m. and 4 p.m. Sundays, July 19 through 28 in the ‘A’ali’ikuhonua Creative Arts Center on the Seabury Hall campus in Makawao. Tickets range from $10 to $15 (plus applicable fees). For more information or to purchase tickets, visit www.mauiacademy.org.

On Saturday, July 20, Maui OnStage Youth Theater opens “Disney’s My Son Pinocchio, JR.,” a retelling of the story from Geppetto’s perspective. The adaptation features familiar characters like the Blue Fairy (Madison Cordeiro), Stromboli (Ethan Baysa) and, of course, Pinocchio (Poli’ahu Hale), as Geppetto (Anuhea Hale) journeys beyond the toyshop to discover the meaning of family.

When his beloved puppet comes to life, Geppetto quickly learns that being a parent is full of challenges. He struggles to make his son “the perfect boy,” only to lose him to the Ringleader (Leilani Vares) of Pleasure Island, and his gang of Roustabouts (Kahealani Salter, Audrey Heinlein and Kanoa Goring).When faced with never seeing Pinocchio again, Geppetto learns the joy of being a father and loving his child unconditionally.

This 2009 stage version includes “When You Wish Upon a Star” and “I’ve Got No Strings,” alongside new songs by Tony Award-nominee, Academy Award-winner and Grammy Award-winner Stephen Schwartz.

Best known for the Broadway blockbusters “Godspell,” “Pippin” and “Wicked,” many might ponder why Schwartz didn’t have any stage hits in between. He did, with Disney. Schwartz composed the original music and lyrics for “Pocahontas,” “The Hunchback of Notre Dame,” “The Prince of Egypt” and the made-for-television musical, “Geppetto,” which became “My Son Pinocchio” for the stage. Schwartz’s original songs were initially intended for a “Mary Poppins” sequel to star Dick Van Dyke and Julie Andrews. When the project was scrapped Schwartz resurrected the songs for the Emmy Award-winning TV musical.

“Having the opportunity to direct ‘Pinocchio, JR.’ has been such an amazing learning experience for me. Getting to watch the kids grow and improve every day provides me with a sense of fulfillment and joy,” says first-time Director Brianna Kenar.

I asked if she had a favorite moment and what she hopes audiences will take away from the show.

“For everyone who comes to see the show, we hope that they leave a little happier. This show really stresses family relationships, and demonstrates the effect familial relationships can have on an individual — positive or negative. There are so many great moments in the show but one of my favorites is Geppetto’s solo, ‘Empty Heart.’ It is really touching and there have been several times the whole production staff and I have teared up while listening to it,” she replied.

• Maui OnStage Youth Theater presents “Disney’s My Son Pinocchio, JR.,” music and lyrics by Stephen Schwartz, book by David Stern, directed by Brianna Kenar, choreographed by Jessica Nelson and under the musical direction of Sara Jelley. Performances are at 11 a.m. Saturdays and 1 p.m. Sundays, July 20 through 28 at the Historic Iao Theater in Wailuku. Tickets are $10 for adults and $6 for children. To purchase tickets for any Iao Theater event, call 242-6969 or order online at www.mauionstage.com.

Maui OnStage presents the Maui premiere of “Mamma Mia!,” music and lyrics by Benny Andersson and Bjorn Ulvaeus, book by Catherine Johnson, directed and choreographed by Kalani Whitford, under the musical direction of Kim Vetterli.

• Performances are at 7:30 p.m. Fridays and Saturdays and 3 p.m. Sundays, opening Friday and running through Aug. 4 at the Historic Iao Theater. Tickets are $20 to $40. To purchase tickets for any Iao Theater event, call 242-6969 or order online at www.mauionstage.com.

Maui OnStage’s ONO! (One Night Only) series returns with a staged reading of “An Enemy of the People” by Henrik Ibsen, directed by Vinnie Linares.

• Performance is at 6:30 p.m. Monday at the Historic Iao Theater. The free ONO! events happen every second Monday of the month. For more information, visit www.mauionstage.com.