Just in time for a perfectly chilling, horrifyingly fun Halloween 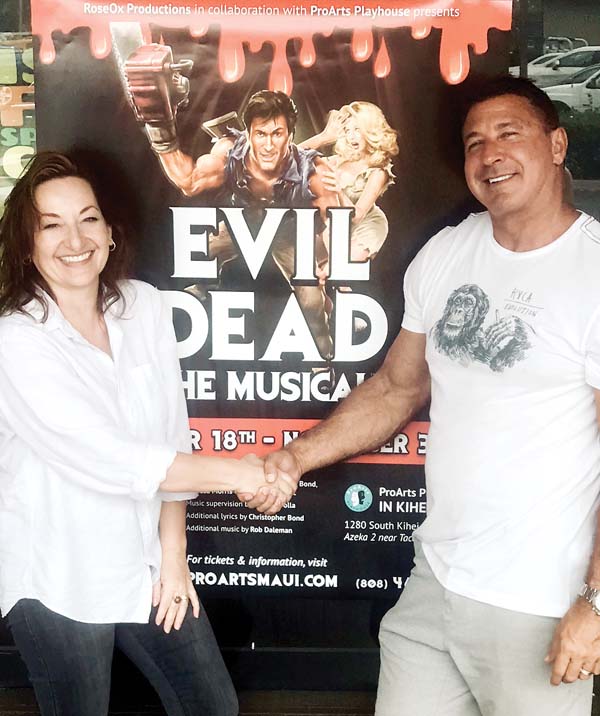 Jennifer Rose and Jim Oxborrow are the creative minds behind Roseox Productions, which will be presenting “Evil Dead The Musical” just in time for Halloween, with performances at 7:30 p.m. Thursdays through Saturdays and 3 p.m. Sundays Oct. 18 through Nov. 3 at ProArts Playhouse in Kihei. Photo courtesy of ROSEOX PRODUCTIONS

The founders of Roseox Productions, Jennifer Rose and Jim Oxborrow, have a peculiar explanation on how they met.

“Jim’s audition was hilarious,” countered Rose. “He was singing and ripped of his shirt to reveal he was wearing a leather harness underneath. I loved that so much.”

“The song was ‘Black Boys’ from ‘HAIR,’ “ clarified Oxborrow.

That uncommon introduction has led to their producer pairing as they gear up for their latest production “Evil Dead The Musical,” which will open in October at the ProArts Playhouse in Kihei. 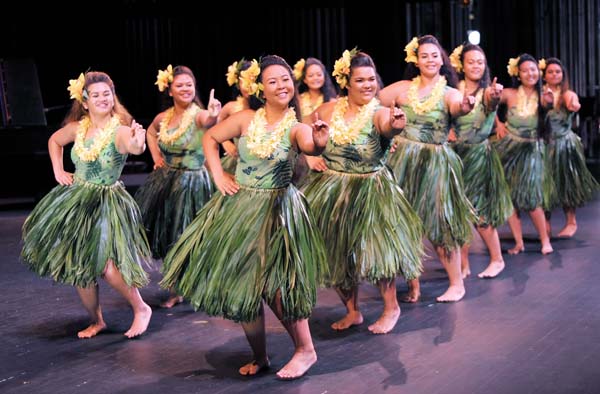 Fresh off their first auditions I asked the two last week how Roseox came about.

“We had a meeting about ‘The House of Yes’ in 2016 over crispy duck at this Thai restaurant we always go to at the Maui Mall,” explained Rose.

“Every meeting involves us having crispy duck,” added Oxborrow.

A passion project of Oxborrow’s, the controversial play which dealt with incest, debuted at the ProArts playhouse in October 2016 and was a resounding success.

“We talked about me directing with Jen’s assistance and her playing the mother. That one was my baby and I was excited that Jen agreed to do it,” shared Oxborrow.

“I loved the film, so we decided to co-produce and collaborate on the play. That project kick-started Roseox,” said Rose.

The duo also designed the set for “The House of Yes.”

The following year Roseox launched Cabaret del Vino, a weekly dinner show cabaret at Cafe del Vino in Maalaea, which ran for one year and featured many local musical theater stars including its emcee Dale Button, as well as Karen Stavash, Sara Jelley and Jayse Leavitt.

Since then, they presented an ONO reading of ” ‘night Mother,” an equally controversial play about suicide, and co-designed the set for “Other Desert Cities” last fall with ProArts.

“We share a truth. We have the exact same aesthetic sensibility which I find remarkable,” said Rose.

I asked about their latest project “Evil Dead.”

“The project went through different channels and ended up in my lap. Jen wasn’t high on it at first,” said Oxborrow.

“I love satire and farce which this has. At the callbacks last night I couldn’t stop laughing. It’s hilarious already. I discovered that you don’t need to be a horror fan or be scared of this. There will be thrills for the people that love horror, but its farcical. Its genre is more satire than horror. It makes fun of all the movies,” added Rose.

Oxborrow, on the other hand, is a great fan of camp and pop culture and has a connection to 1987’s “Evil Dead II.”

“I knew Rick Domeier from when I was living in L.A. in the ’80’s. He was a bartender friend of mine before landing the role of Evil Ed. That was when we were all young and in our 20s and trying to become actors in Hollywood. So I’ve always been a huge fan of the films and Bruce Campbell, and how Sam Raimi (the film’s director) brought humor and camp to horror films. I’m super excited for this production,” Oxborrow shared.

I asked if they could reveal some of the shocking elements audiences might expect from “Evil Dead The Musical.”

“There will be a splash zone in the first two rows. There will be blood, a lot of it, and those seats will come with a plastic poncho. There are potential decapitations and amputations so we’re going to need a lot of Jen’s blood,” explained Oxborrow.

I asked if Rose would be using her own blood.

“Yes, I’ll be tapped nightly. I thought Jim meant that I would be tap dancing, but I had already signed the contract at that point. I’m ready to give to the cause,” mused Rose.

In reality she has gathered many faux blood recipes but hasn’t perfected the right combo.

“The perfect blood recipe needs to be hypoallergenic, non-toxic, edible, washable and noncomedogenic (non-pore clogging). We can’t have any of our beautiful actresses with blocked pores,” she explained.

“Kalani is the perfect person to direct. The production has been an impeccable convergence of opportunity. He and Todd [Whitford’s partner Todd Van Amburgh] saw a production of ‘Evil Dead’ in Portland,” shared Rose.

On the horizon. Rose will be directing the holiday production of “Matilda The Musical” at the Historic Iao Theater, and Roseox has plans for a 2020 production of David Mamet’s “American Buffalo” in development.

“I guess our style is dark comedy and small plays, but always at the core is black comedy,” explained Rose.

Oxborrow forewarned that “Evil Dead The Musical” is for adults 18 years of age and older only for language, but reiterated that the violence is comedic.

“I hate horror movies, so if I like it than everyone will,” said Rose.

Roseox Productions and ProArts present “Evil Dead the Musical,” book, music and lyrics by George Reinblatt, with performances at 7:30 p.m. Thursdays through Saturdays and 3 p.m. Sundays Oct. 18 through Nov. 3 at the ProArts Playhouse.

The Maui Arts and Cultural Center presents Ku Mai Ka Hula 2019. The 14th annual event features award-winning halau competing in solo and group performances. Male and female dancers will perform both kahiko (traditional) and ‘auana (modern) hula stylings. This year, articipating halau are from throughout Hawaii, the continental U.S. and Japan. On Thursday, September 12 enjoy “Hula Mai,” a presentation of traditional procreation chants and dances in celebration of ali’i family lines as poetical expressions as well as exhibited in hula form. The “Hula Mai” performance is at 7:30 p.m. Thursday, September 12 in the McCoy Studio Theater. “Ku Mai Ka Hula” performance is at 1 p.m. Saturday, September 14 in Castle Theater at the MACC. To purchase tickets for any MACC event visit the box office, call 242-7469 or order online at www.mauiarts.org.

ProArts presents “Strangers on a Train,” by Patricia Highsmith, directed by Tina Kailiponi. Two strangers, Guy Haines and Charles Bruno meet on a train. Bruno suggests that they could get away with murder. He could kill Guys unfaithful wife while Guy could eliminate his hated father. Guy does not take him seriously, but Bruno is deadly serious.

Performances are at 7:30 p.m. Thursdays through Saturdays, 3 p.m. Sundays, starting Friday, September 13 through 29 at the ProArts Playhouse in Kihei. Tickets are $26. For more information or to purchase tickets for any ProArts event call 463-6550 or visit www.proartsmaui.com.