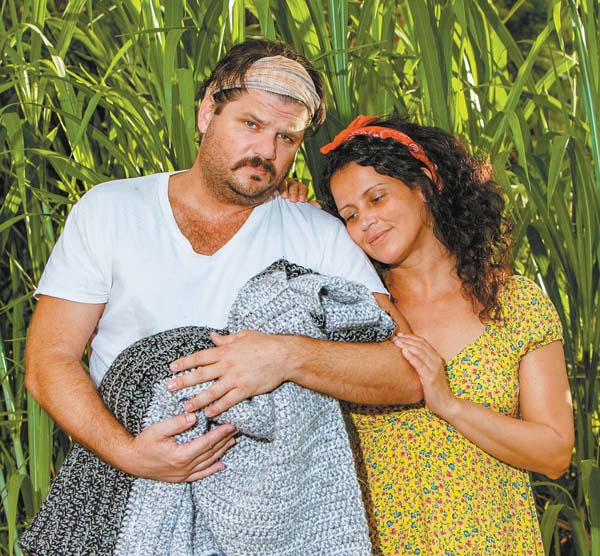 Jefferson Davis (left) and Jussara Oliveira are two central figures of Oh Boy Productions’ Hawaii premiere of “Tortilla Curtain” by Matthew Spangler, directed by Vinnie Linares. Performances are 7:30 p.m. Thursday, Friday and Saturday, and 3 p.m. Saturday and Sunday in the McCoy Studio Theater at the Maui Arts & Cultural Center in Kahului. Tickets are $30 for general admission, $20 for students with ID (plus applicable fees). For more information or to purchase tickets visit the box office, call 242-7469 or order online at www.mauiarts.org. Jack Grace photo

Over the past two seasons, Vinnie Linares’ Oh Boy Productions has expanded the number of theatrical productions presented seasonally. Some of its finest offerings have included 2017’s “Medea” and last August’s exemplary “Albatross” by Matthew Spangler.

I inquired of Linares how he selected this play, which addresses immigration.

“This show is about what’s going on, but that’s not the reason I chose it,” explained Linares. “I originally wanted to produce ‘The Kite Runner,’ which has been running in London, but Matt suggested ‘Tortilla Curtain.’ For once I decided to listen to the playwright.”

Spangler, the son of local cellist Ginny Morgan and brother of former Maui actor and lighting designer Joe Spangler, spent his summers and holidays on Maui as a youth. 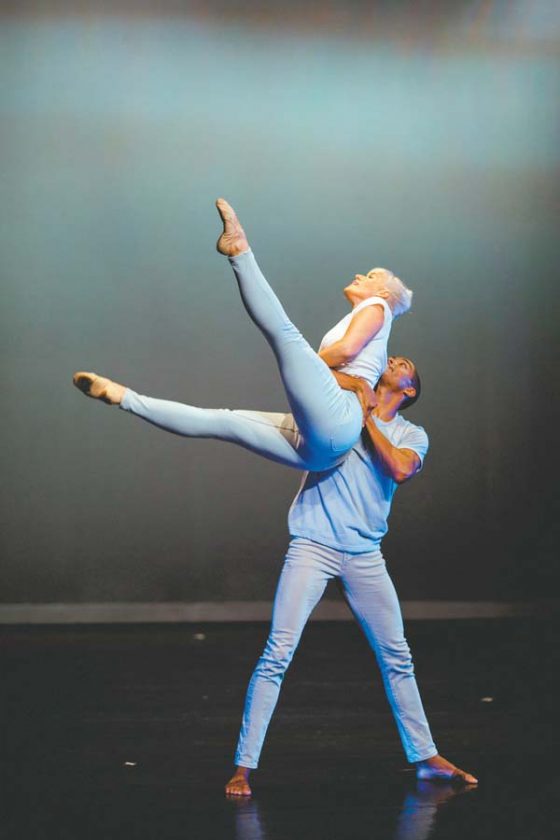 “Even though I didn’t spend 100 percent of my time on Maui, the island still had a profound effect on my development as a writer,” shared Spangler. “I remember long summer days reading everything I could get my hands on, and I went to as much theater as I could.

“I think the hardest I have ever laughed in the theater, to this day, was at a performance of short plays at the [Historic] Iao Theater in what must have been July 1991. I thought to myself, ‘Wow, I want to do this. I don’t care how. I want to be on stage. I want to direct. I want to write. I just want to be part of this.’ And now, almost 30 years later, I have seen my plays on London’s West End, off-Broadway in New York, at theaters around the U.S., and this year one of my plays will be at the Dubai Opera House. But I can’t overstate how much it means to me to come home and see ‘Tortilla Curtain’ on Maui. This production at the MACC — with this company of artists — really is among the highlights of my career and life.”

I asked Spangler what his inspiration was in creating the show.

“Many of my plays are adapted from novels. I read T.C. Boyle’s ‘The Tortilla Curtain’ in 2005, and I instantly wanted to see it on stage,” added Spangler. “The book alternates from one character’s point of view to another from chapter to chapter.

“I wanted to see if I could write a stage play that would do the same thing — alternate the point of view from scene to scene. I realized that when you do this onstage, the audience starts to know more about the story than any of the characters do — which is kind of interesting dramatically. I also teach courses in immigration studies at San Jose State University in California, and the topics in this play are never far from my mind.”

“It’s about a community impacted by the image of what a Mexican-American is. It tackles class, culture, politics and privilege. The play is full of stereotypes, but that is on purpose. The intention is to see beyond the stereotypes. It’s not about Trump or illegal immigration. This is about human dignity and wanting to be a part of a community — not just the immigrant characters, all of the play’s characters,” expressed Linares. “At the most basic level, I hope people are entertained by the production. I also hope they take away some deeper, more nuanced or just plain new ideas about the topics of immigration, nativism and xenophobia,” said Spangler.

On Friday night, I attended the dress rehearsal of Adaptation Dance Theater’s “Bring it Home 2019” at its Haliimaile studio. While there, I was reminded that dance is a sport, as it appeared as if all the dancers had bandages and bruises. Like athletes, they embrace the exhaustion, injuries and hard work for the love of the game. This weekend that hard work comes to fruition with “Bring It Home 2019” at the ‘A’ali’ikuhonua Creative Arts Center at Seabury Hall in Makawao.

” ‘Bring it Home’ offers such a rare opportunity to work with and perform alongside dancers who played an important role in shaping who I am today and inspired my lasting love for dance,” says McGain, a first-time guest artist who graduated from Seabury Hall and is now a freelance artist based out of New York City.

“I feel so inspired by the people I get to create with here,” says Hallie Hunt, ADT co-founder and co-artistic director.

For the first time, “Bring it Home” has invited a guest company to perform: FLOCK of Chicago.

“While we weren’t necessarily looking to host a guest company this year, the opportunity to invite FLOCK to join ‘Bring it Home’ came about in such an organic and fluid way, and we knew working with them would be a professional experience our dancers would highly value,” expresses Hunt.

FLOCK was co-founded in 2017 by Florian Lochner and Alice Klock, who met during their mutual time as dancers and choreographers for Hubbard Street Dance Chicago. The duo co-choreographs and performs, teaches as a team and has produced shows in the U.S. and Germany.

“We heard about ADT through social media and really appreciated the concept of the ‘Bring it Home’ concert,” says Lochner. “We are thrilled to be participating in this year’s concert and are so happy to share what we have to offer with the artists of ADT and the audiences on Maui.”

“We hope that people will feel, through our work, that dance is for everyone,” adds Klock. “We love for audiences to come in with an open mind and to enjoy applying their own creativity to what they perceive, creating their own interpretations and stories within the experience we offer.”

Resident dancer Cost joins “Bring it Home” this year. Like most of the company, Cost left Maui after high school to study and pursue professional dance on the Mainland.

“I was creating new work through choreographic residencies [with] a group of Bay Area dancers until I hit a wall in 2014. In a city so oversaturated and crowded, I lost sight of what I wanted to say with dance,” Cost says.

She moved back to Maui in 2018, and on a whim attended last year’s performance.

“As I sat in the audience, I had the stunning realization this is the best dance I had seen in a long time. And to see this on my home island — a place we had been told we needed to leave if we ever wanted to pursue dance professionally — I was blown away. I found myself blurting out, ‘I want to dance again’ to Co-Artistic Directors Hallie and Amelia in the lobby after the show. I feel I have found what I was always looking for by coming home,” she adds.

• Adaptations Dance Theater presents “Bring it Home 2019.” Performances are 7:30 p.m. Friday and Saturday and 6:30 p.m. Sunday at the ‘A’ali’ikuhonua Creative Arts Center on the Seabury Hall campus in Makawao. Tickets are $30 for adults and $15 for students (with valid ID). To purchase tickets or for more information, visit www.adaptationsdancetheater.com.

• Performances are 7:30 p.m. Friday and Saturday and 3 p.m. Sunday at the Historic Iao Theater in Wailuku. Tickets are $20 to $40. For more information or to purchase tickets for any Iao Theater event, call 242-6969 or order online at www.mauionstage.com.

“Mamma Mia!” contains adult content which may not be appropriate for all audiences.

Maui OnStage will be holding auditions for “The Graduate,” by Terry Johnson, directed by Rick Scheideman. All roles are open with auditions scheduled in 10-minute increments from 5 to 9 p.m. Monday at the Historic Iao Theater.

Actors should prepare a one to two-minute contemporary monologue, bring a headshot (or recent photograph) and resume. To reserve an appointment or for more information, visit www.mauionstage.com.