‘Strangers on a Train’ 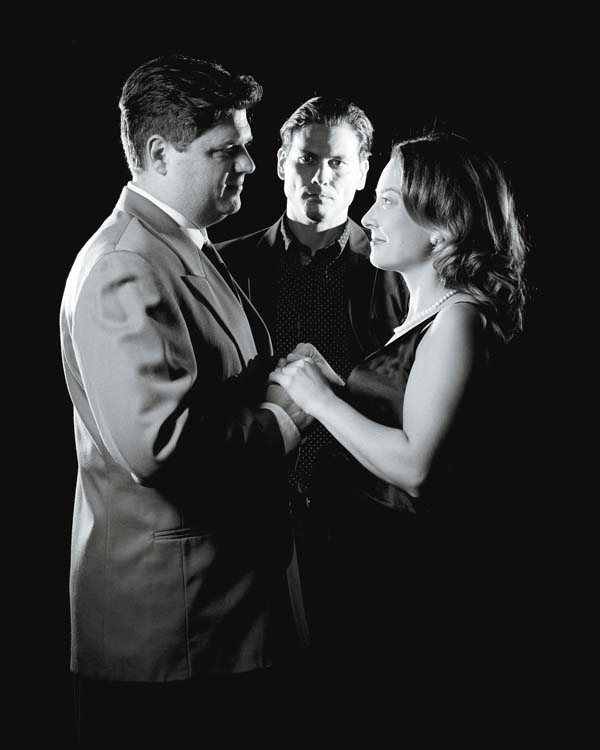 Well-known for their murder mystery and thriller productions such as “The Mousetrap,” “Ten Little Soldiers,” “Dial M for Murder” and June’s “Sleuth,” ProArts explores this noir genre again when they open their 2019-20 season tomorrow night with “Strangers on a Train” at the Pro Arts Playhouse in Kihei.

The novel, by American author Patricia Highsmith, was her first and an instant success when it was published in March of 1950. The rights were immediately acquired by Alfred Hitchcock’s Transatlantic Pictures and rushed into production by the fall of 1950.

In the story, two strangers who meet on a train, Guy (Jefferson Davis), a young tennis player, and Bruno (Geronimo Son) a good-looking and charming psychopath. Bruno suggests that because they each want to “get rid” of someone, they should “exchange” murders, and that way neither will be caught. Haines, believing this to be a hypothetical fantasy, does not take Bruno seriously. Bruno, on the other hand, is deadly serious. He commits the first murder and then tries to force Guy to live up to his end of the bargain.

If this sounds familiar, but you’ve never seen the Hitchcock film, that’s because the premise has been borrowed time and time again in such vehicles as “Throw Momma From the Train,” “Horrible Bosses,” and in episodes of “The Simpsons” and “Modern Family.”

The rights for a modern stage version were acquired by playwright Craig Warner, and the play debuted in London in 2013. 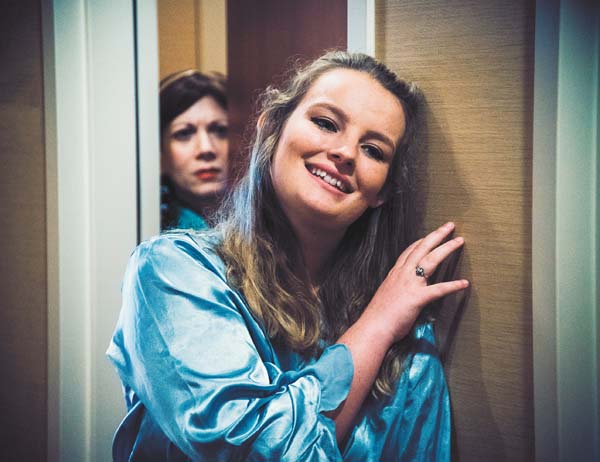 I sat with director Tina Kailiponi, Davis and Sun and asked what their favorite aspect was in presenting a classic mystery on stage.

“For one the time period. I love the ’50s, and it’s been so much fun diving into that era,” replied Kailiponi. “But I also like that this story has a lot of subtext and undertones that need to be played out correctly, I found that intriguing. Nothing is as it seems, and it is fun to present that on stage. When I was approached to direct, I became interested in the script because it was something different, something I had never done before. My background is comedy and children’s theater. So I knew it would be a challenge, and that excited and terrified me. It took a lot of research to become comfortable with this style.”

“I’m excited for the great people I get to work with,” shared Sun. “I get cast a lot as the villain, and that’s fine, but Bruno has lots and lots of layers. It’s fun to dig into that. Everything is in the script, and I’m enjoying ways to play all of his complexities.”

“I’ve always liked this genre. True suspense isn’t done much anymore,” expressed Davis. “I’m enjoying the duality of my character — wrestling with his dark side. Guy lives in two environments at the same time, which creates some really unique interaction between the protagonist and the antagonist.”

I inquired why this genre, one so immensely popular in the ’30s through ’50s, is so rarely presented in the 21st century.

“I think it contrasted a world that was so very different for most people. The genre was pretty major and commonplace in the ’40s and ’50s, but it was a simpler time — an escape from everyday life. It hasn’t gone away; it’s been replaced by psychological thrillers and horror, but the style hasn’t been replicated,” suggested Kailiponi.

“We’ve become so violent as a society that we just need to see it all as a culture. Nothing is left to anticipation, suspense and the imagination. True crimes stories on TV and horror films have replaced this genre, and there were so just many good ones from that era,” added Davis.

“It’s a genre that isn’t done very much anymore, and I think that the crowd that enjoys it is also a theater crowd,” expressed Davis regarding why Maui audiences should attend “Strangers on a Train.”

“This is live. So you’ll see true blood, sweat and tears that will move you. It’s not the same as watching suspense on TV,” conveyed Sun.

“This one’s different,” agreed Kailiponi. “It’s not your typical whodunnit. It has so many layers and secrets that the characters possess. Their life is not black and white. There are many, many shades of grey.”

“My favorite line in the show is Bruno’s ‘For everything you know there should be something you don’t know,’ “ shared Davis.

ProArts presents “Strangers on a Train,” by Craig Warner, based on the novel by Patricia Highsmith, directed by Tina Kailiponi. Performances are at 7:30 p.m. Thursdays through Saturdays and 3 p.m. Sundays starting tomorrow through Sept. 29 at the ProArts Playhouse. Tickets are $26. For more information or to purchase tickets for any ProArts event call 463-6550 or visit www.proartsmaui.com.

Hula Mai is a presentation of traditional procreation chants and dances in celebration of ali’i family lines as poetical expressions as well as exhibited in hula form.

The “Hula Mai” performance is 7:30 p.m. tonight in McCoy Studio Theater. The Ku Mai Ka Hula performance is at 1 p.m. Saturday in Castle Theater. To purchase tickets for any MACC event visit the box office, call 242-7469 or order online at www.mauiarts.org.

Maui OnStage presents the Hawaii premier of “The Graduate,” adapted by Terry Johnson, based on the novel by Charles Webb and the screenplay by Calder Willingham and Buck Henry, directed by Rick Scheideman.

Benjamin Braddock (Elisha Cullins) is a confused young man. Having spent four years achieving a brilliant scholastic record, upon graduation he finds himself adrift, uncertain about his future, disconnected from his purpose and increasingly alienated from his parents’ upper-class, suburban, “plastic” world.

Fighting panic and boredom, he is deeply conflicted but ultimately willing when Mrs. Robinson (Marsi Smith), the unhappily married, alcoholic and dangerously charismatic wife of his father’s business partner, tempts him into an affair.

Performances are at 7:30 p.m. Fridays and Saturdays and 3 p.m. Sundays, Sept. 27 through Oct. 13 at the Historic Iao Theater in Wailuku. Tickets range from $20 to $40. To purchase tickets for any Iao Theater event call 242-6969 or order online at www.mauionstage.com.

Maui OnStage seeks singers and actors of all ages for inclusion in Roald Dahl’s “Matilda The Musical.”

All actors must prepare 16 bars of a song that befits this musical. For a complete character list, more information or to schedule an appointment visit www.mauionstage.com.