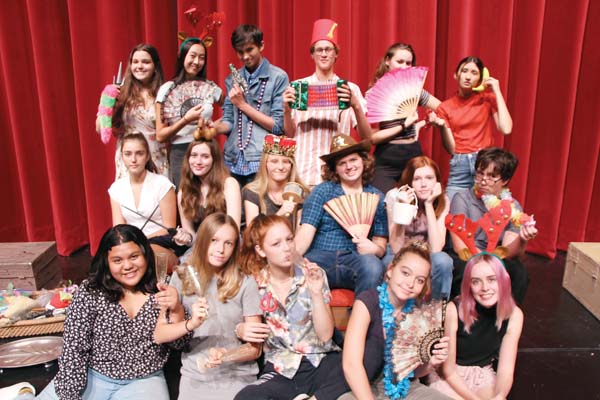 Traditionally, our local high school theater programs present their first shows of the season between Halloween and Thanksgiving. In past years these productions conflicted, but this season Maui’s directors and drama instructors have scheduled them to open consecutively, starting this weekend with “Rememberin’ Stuff” at the King Kekaulike Performing Arts Center in Pukalani.

I asked director Chris Kepler what the play is about. “There’s a lot ‘Godspell’ in ‘Rememberin’ Stuff.’ Not in content, but structure. The whole ensemble is on stage for virtually the entire show. There are no real lead roles,” he explained. “It is the story of a group of high school drama students who are asked by their drama teacher to remember stuff. Students are then featured in vignettes and monologues that recreate memories for each other. It is a dramatic comedy, but some of the scenes may be inappropriate for children under twelve,” Kepler related.

The King Kekaulike program frequently features slightly unknown scripts intended for teens, and Kepler explained his search process. “The number one challenge I face each year is show selection. There is a vast number of publishing companies and scripts out there for young people, so it’s a lot of searching, reading and sorting through the trite and finding one with merit and substance.” “Rememberin’ Stuff” will showcase 26 students. “I think it’s important that each and every acting student gets their feet wet on stage. So, the biggest challenge is finding a script with enough characters to sustain our audition base,” he said.

I inquired why regular theatergoers should support high school theater, too. “Maui high schools generally present plays and musicals which are directed, performed, and produced at a highly entertaining level. Another consideration is expense. An entire family can spend a night enjoying the arts for less than a night out for dinner. Of course, the inherent value of supporting and being exposed to the performing arts is the ultimate reason to take in some high school theater.”

* King Kekaulike Drama presents “Rememberin’ Stuff” by Eleanor Harder. Performances are at 7 p.m. Fridays and Saturdays, Nov. 1 through 9, 3 p.m. Saturday Nov. 2, and 3 p.m. Sunday Nov. 10 at the King Kekaulike Performing Arts Center on the King Kekaulike High School campus. Tickets are $10 for adults, $8 students and are available at the box office 45 minutes before show time. 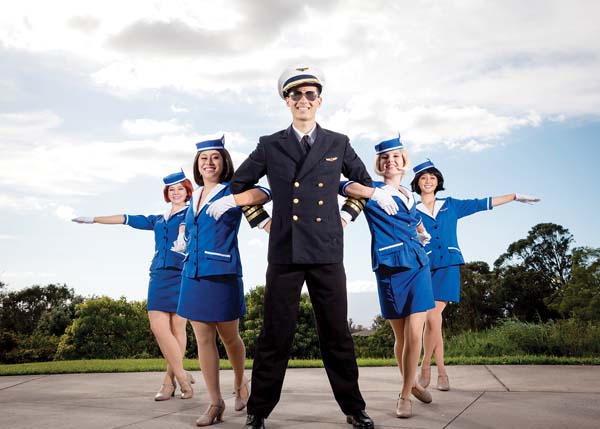 Caitlyn Campbell (from left), Kala‘i Fong, Dominic Carosso, Jadyn Gurley, Genevieve Chin are shown in a scene from “Catch Me If You Can The Musical.” It opens Nov. 15 at A‘ali‘ikuhonua Creative Arts Center on the Seabury Hall campus in Makawao. PETER SWANZY photo

The following weekend, Baldwin Theatre Guild begins their season with “Play On!,” directed by Linda Carnevale. “This is the hilarious story of a theater group trying desperately to put on a play in spite of forgetting lines, questioning the script, and the maddening interference from a haughty authoress (Raina Ouye) who keeps revising the original script,” shared Carnevale.

Carnevale has directed the farce in two other occasions at Baldwin High School and appeared in a production of “Play On!” in her youth. “I really enjoy this play. My first encounter was in the early ’90s when Maui Community Theatre was doing this play. The actress doing the role of ‘the director’ dropped out two weeks before opening, and the director asked me to play the part. With very little rehearsal I jumped in and had such a good time. This show is a lot of fun and each time I have directed it, the students have had fun performing it,” she said.

Carnevale augmented Kepler’s thoughts on the importance of high school theater. “As educational theater, we are often the starting point to a student falling in love with theater, while also learning more about themselves. By supporting high school theater, an audience member is witnessing first-hand the growth of a young person and saying, ‘we support our youth in a creative journey through theater,’ “ she expressed.

* The Baldwin Theatre Guild presents “Play On!” by Rick Abbot. Performances are at 7:30 p.m. Fridays and Saturdays, Nov. 8 through 16, 3 p.m. Sunday Nov. 17 in the Loudon Mini-Theatre on the Baldwin High School campus in Wailuku. Tickets are $8 adults, $7 seniors, $6 students, $3 children 10 and under and are available at the box office 45 minutes before show time.

The following week, Seabury Hall Performing Arts presents “Catch Me If You Can The Musical.” Like the film it’s based on, this musical adaptation, set in the swinging ’60s, is amazing true story of a teenage con-artist pursued by the FBI.

Frank Abagnale Jr. (Dominic Carosso) hunted by agent Frank Hanratty (Gabe Frampton), decides to give the audience his version of the truth, and narrates his life as a hip, dance-heavy variety television show. Young Frank runs away from his mom (Megan Malcolm) and dad (Javi Frith) and into the arms of Brenda (Stefani Peterson) by conning people by assuming a multitude of identities which include airplane pilot, doctor, and lawyer. Written by the creative team behind “Hairspray,” “Catch Me If You Can” tells the tale of an ingenious, yet lonely young man looking for his place in the world.

“I like the show because it’s different from shows I’ve done in the past in that it’s less a true musical comedy and more about storytelling,” said director and choreographer David Ward. “Throughout the show, the two main characters narrate the story by breaking the fourth wall and speaking directly to the audience, guiding us through their crazy chase around the country and how they come to build a relationship and unusual friendship,” he explained.

Traditionally, Seabury presents a musical every other year. “This is the first time we’re doing a musical two years in a row. And it’s because the students asked for it,” shared Ward. “For the first time ever, we had a group of talented boys, most of whom are seniors this year, who were begging us to do another musical. How could I turn that down! This doesn’t happen very often for us. We chose this show after looking at a variety of musicals last spring that featured strong male performers. What brought us back to ‘Catch Me If You Can’ over and over was the score. Both Molly Schad and I love this music,” he added.

“Nearly every time we turn the page in the vocal score, I exclaim ‘I love this song! This is one of the best songs of the show!’ And I mean it every time. It’s music you want to listen to more than once, which is good because it’s been stuck in my head for months,” says Schad, the production’s vocal director.

* Seabury Hall Performing Arts presents “Catch Me If You Can The Musical,” book by Terrence McNally, music by Marc Shaiman, lyrics by Shaiman and Scott Wittman. Performances are at 7 p.m. Fridays and Saturdays Nov. 15 through 23, 3 p.m. Sunday, Nov. 24 at the A’ali’ikuhonua Creative Arts Center on the Seabury Hall Academy campus in Makawao. Tickets are $15 for adults, $13 seniors, $8 students, with $2 discounts if purchased in advance. For more information or to purchase tickets online visit www.seaburyhall.org.

Roseox Productions and ProArts concludes “Evil Dead: The Musical,” book, music and lyrics by George Reinblatt, directed by Kalani Whitford, under the musical direction of Marti Kluth. Performances are at 7:30 p.m. Thursday through Saturday, and 3 p.m. Sunday through Nov. 3 at the ProArts Playhouse in Kihei.

“Evil Dead: The Musical” is restricted to audiences age 18 and over due to strong adult content.

For more information or to purchase tickets for any ProArts event, call 463-6550 or visit www.proartsmaui.com.