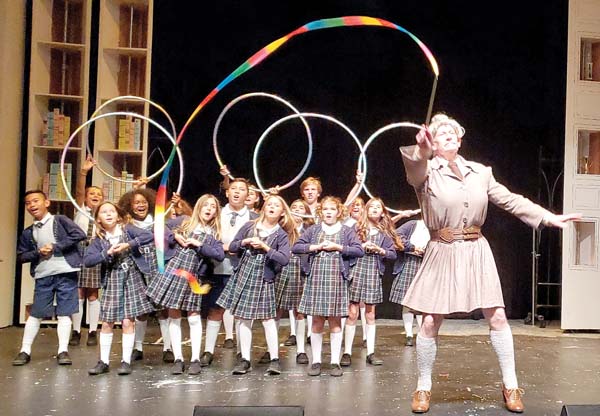 In his posthumously published children’s novel “The Minpins,” Roald Dahl wrote, “Those who don’t believe in magic will never find it.” An eternal optimist who believed that kindness is the number one attribute a human can have, the celebrated British writer also said, “Somewhere inside all of us is the power to change the world.” Those two ideas have a lot to do with the story of “Roald Dahl’s Matilda The Musical,” which opens tomorrow night at the Historic Iao Theater in Wailuku.

A decade before J.K. Rowling’s “Harry Potter,” Dahl gave us the magical “Matilda.” There’s a good chance that if you’re over 60 you have no idea who “Matilda” is, but if you’re under 30 you probably know her well. If you’re reading this at a family Thanksgiving gathering, just ask the nearest 10-year-old and they can tell you all about her. According to the School Library Journal, “Matilda,” is number 30 on the most checked out children’s books list of United States libraries, and Dahl, with four other books in the top 100, is the most popular author.

Matilda (locally played by two child actors, Calilynn Salzer and Shaylah Sanchez) is a little girl with astonishing wit, hyper intelligence, immense confidence and leadership skills, oh, and she has psychokinetic powers. She’s unloved by her cruel parents but impresses her schoolteacher, the highly loveable Miss Honey (Sara Jelley). Yet even under Miss Honey’s watch, Matilda’s school life is far from congenial.

The school’s malicious headmistress, Miss Trunchbull (Dale Button), loathes children and enjoys fashioning cruel and outrageous punishments for those who don’t abide by her rules. In retaliation, Matilda pulls pranks such as gluing her father’s hat to his head, hiding a parrot in the chimney, and covertly dying her father’s hair. Matilda’s bestie, Lavender (Lucia Romero and Olivia Robinson), joins her in a practical joke on Miss Trunchbull by placing a newt in her jug of water.

Traditionally played, but with more than one actress, I visited with the two Matilda’s and local director Jennifer Rose last week and asked why they wanted to do the musical. 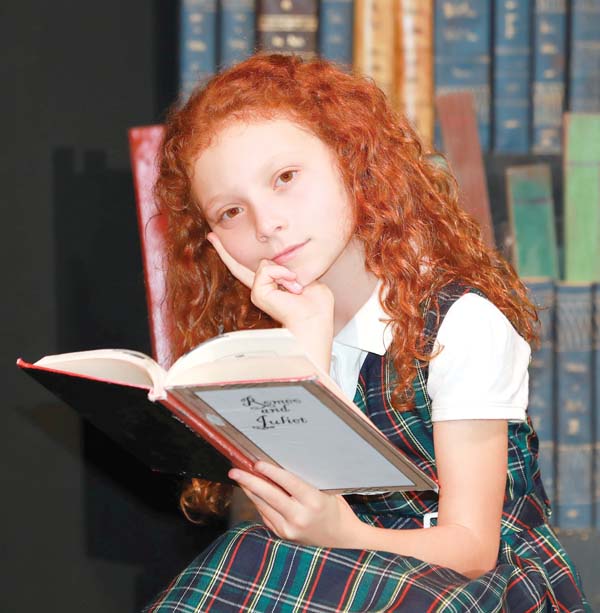 Matilda, played here by Calilynn Salzer, is a little girl with astonishing wit, hyper intelligence, immense confidence and leadership skills, oh, and she has psychokinetic powers. She’s unloved by her cruel parents but impresses her schoolteacher, the highly loveable Miss Honey (Sara Jelley). Yet even under Miss Honey’s watch, Matilda’s school life is far from congenial. RAY CHIN photo

“I love the book and the film, and Roald Dahl in general” said Rose. “He is such a child advocate and I also love the language that he uses. Trunchbull’s character and language is just shocking, and when you incorporate Dahl’s characters with Dennis Kelly’s script and Tim Minchin’s music and lyrics, it’s a perfect trifecta,” Rose expressed.

Two of the young actresses chimed in. “I always loved the movie and I thought it would be a fun show to do. It’s such a great show and script,” said the 12-year-old Sanchez. “I thought it would be a great opportunity. When I go to see shows, sometimes I wish that I could be in them, but I really wanted to be Matilda. She can move things with her eyes,” added the 10-year-old Salzer. The two will alternate every other performance over the three-week “Matilda” run.

The author’s whimsical fantasy novels, not to be confused as short children’s books, also include “The BFG,” “The Witches” and “Fantastic Mr. Fox.” All offer an eventual warm sentiment and happy endings, but juxtaposed with grotesque, darkly comedic, and sometimes violent scenarios. Dahl is famous for his inventive language, new terms he created by scribbling down words on paper and then swapping letters around. Although no definitions are offered, children always seem to know what they mean simply by their sounds. For example, scrumdiddlyumptious is something good to eat, but uckyslush is not. The names of his characters also instantly suggest if they are good or bad. In “Matilda” Dahl invented Trunchbull’s punishment room, “the Chokey,” which is filled with broken glass on the walls and nails on the door.

I inquired if the three had a favorite scene. “I really love ‘Revolting Children;’ for me, that is the pinnacle,” shared Rose. ” ‘Revolting Children’ gets all the children motivated. Matilda says, ‘We can’t let this happen anymore.’ We have to do what’s right,” expressed Salzer. “Matilda is a leader; she’s a freedom fighter,” added Rose. “That’s so hard. I love it all,” said Sanchez. ” ‘My House’ is such a beautiful song. Miss Honey is so grateful for her little house and love how thankful she is. She (Sara Jelley) has such a beautiful voice and I tear up every time she sings it.”

It seems more than likely much of Dahl’s “Matilda” inspiration comes from the English boarding schools he attended, which he wrote about it in his illustrated autobiography, “Boy: Tales of Childhood.” Dahl has said that the unlikable Mr. Wormwood was based on a real-life salesman from his hometown of Great Missenden, and the Great Missenden library was the inspiration for Matilda to begin devouring literary classics “at the age of four and three months.”

At the age of eight, Dahl and four friends were caned by the headmaster after putting a dead mouse in a jar of gobstoppers at the local candy shop, owned by a Mrs. Pratchett, whom Dahl described as “mean and loathsome.” He recounted that the five friends named their prank the “Great Mouse Plot of 1924.” Of their punishment he reflected, “All through my school life I was appalled by the fact that masters and senior boys were allowed literally to wound other boys, and sometimes quite severely. I couldn’t get over it. I never have got over it.”

Rose remarked on the enthusiasm of the cast which includes 16 school children. “They ask if they can rehearse a number again and ask to stay late. They don’t want to go home.” Salzer and Sanchez agreed. “Everyone wants to be here. When you see it you can tell everyone wants to be here because we’re having so much fun,” shared Sanchez. “I’m so grateful to be in this show. Everyone has a moment where they are smiling in ‘Matilda,’ even Mrs. Wormwood and Trunchbull, it’s a magical play.”

“It’s so fun and irreverent, sassy, brash, but heartfelt too. ‘Matilda’ has it all,” related Rose.

* Maui OnStage presents the Maui premier of “Roald Dahl’s Matilda the Musical.” Music and lyrics by Tim Minchin, book by Dennis Kelly, directed by Jennifer Rose, choreographed by Camille Romero, and under the musical direction of Robert E. Wills. Performances are 7:30 p.m. Fridays and Saturdays, Nov. 29 through Dec. 14; 2 p.m. Saturdays, Dec. 7 and 14; 3 p.m. Sundays, Dec. 1 and 8 and 6 p.m. Sunday, Dec. 15 at the Historic Iao Theater. Tickets range from $20 to $40. To purchase tickets for any Iao Theater event call 242-6969 or order online at www.mauionstage.com.

The MACC presents the world premier of “White Hawaiian.” Actor/musician Eric Gilliom stars in an original one-man musical, co-created by writer/director Brian Kohne (“Kuleana,” “Get A Job”). Gilliom explores identity through the lens of Hawaiian history, contemporary culture and family through comedy, pathos and music sharing this autobiographical story about identity crisis, a family of entertainers and hope. Performances are at 7:30 p.m. Friday and Saturday, 5 p.m. Sunday, Nov. 29 through Dec. 1 in the McCoy Studio Theater at the MACC. Tickets range from $25 to $35 (plus applicable fees). To purchase tickets for any MACC event visit the MACC box office, call 242-7469 or order online at www.mauiarts.org.