‘Matilda’ is a fairy tale that we can believe in 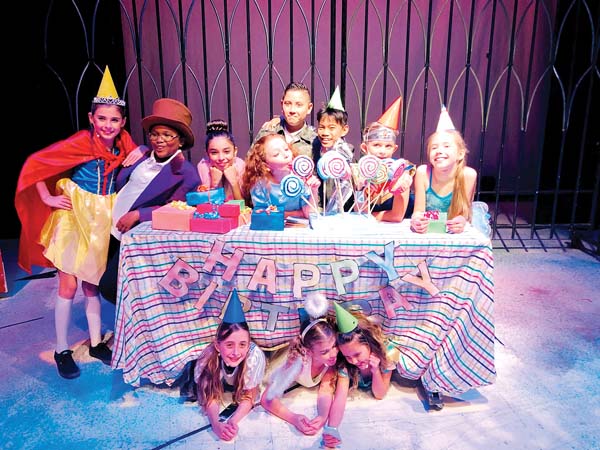 There’s a different style of holiday family fare happening at Historic Iao Theater in Wailuku this season — darker, bolder and more fantastical. Although the novel was written more than 30 years ago, in my opinion, “Roald Dahl’s Matilda the Musical” is more relevant in the 21st-century.

In it’s opening number, “Miracle,” we witness how every child is deemed extraordinarily gifted by their pretentious parents. Throughout this number, spoiled children and oblivious parents are buried in their smartphones. Two particularly neglectful parents are Harry and Zinnia Wormwood, portrayed deliciously evil by Francis Taua and Marsi Smith. Zinnia is too consumed by a ballroom dancing competition with her creepy partner Rudolpho (John Williams), to recognize she is 9-months pregnant. The doctor, played by Dr. Bill Kepler, praises the newborn as “the most beautiful child,” but the father is hoping to “trade” newborn Matilda for a boy. After this one lengthy song, the audience has a pretty clear idea of what poor Matilda’s will be up against and we haven’t even met the real villain yet.

This truly miraculous little girl was wonderfully played by Shaylah Sanchez on opening night. The leading role is shared on alternating days by Calilynn Salzer and Sanchez. Both young ladies triumph in the leading role individually. Salzer holds the stage like no other child I have ever seen with the solo song “Quiet,” and Sanchez delights and captivates the audience with Matilda’s multiple library “Story” sessions.

Books and school eventually provide Matilda some respite. There is the loving librarian Mrs. Phelps (Beth Garrow), a timid but encouraging teacher Miss Honey (Sara Jelley), and her self-appointed best friend Lavender (Olivia Robinson and Lucia Romero). The real villain is former Olympic hammer-thrower and school principal, Mrs. Agatha Trunchbull. Intensely played with humor by Dale Button dressed in drag, Trunchbull hurls children through the air, knocks them to the ground, frequently threatens them with an ominous punishment called “Chokey,” and embraces the school’s motto, “Bambinatum est Magitum,” or “Children are Maggots.”

This may sound bleak, but we’re never worried that Matilda won’t win in the end. A credit to the highly impressive performances of Salzer and Sanchez, as well as the astute direction of Jennifer Rose, who keeps the production very cute and very clever with a dash of mischievousness. Dahl’s story and Dennis Kelly’s script champions the untapped intellect of children presenting them as individuals who have the power to change their story. Or, as Matilda sings in “Naughty,” “Just because you find that life’s not fair it/Doesn’t mean that you just have to grin and bear it/If you always take it on the chin and wear it/Nothing will change.” Whether you are 80 or 8 if you’ve ever thought “it not me, it’s them,” then you will love little Matilda and her dreams. 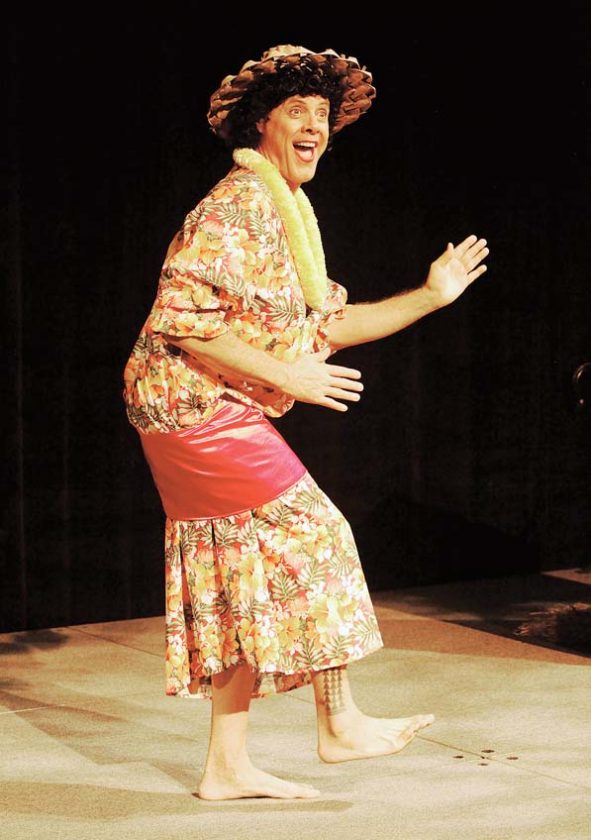 The local cast of 18 youths as “The Bigs” and “The Littles,” makes “Matilda The Musical” astonishingly optimistic, but the pairing alongside 17 adult actors makes it uniquely enchanting. Camille Romero’s choreography is another highlight, as is Caro Walker’s colorful set. In addition, vivid lighting by Amy Lord and flamboyant costumes by Vicki and Jessi Nelson give the production an almost animated quality.

It’s crucial to recognize the real-world view of “Matilda.” This is a musical that bears more resemblance to “Oliver” than “Annie.” This is a fairy tale that we can believe in. Aiding the production’s suspension of disbelief is the spot-on selfishness displayed by Taua, supreme sincerity and the perfect soprano vocals of Jelley, the masterful cartoonish performances of Smith and Williams, Garrow’s authentic sweetness, and the utter repugnancy of Button’s Trunchbull. Although some adults may not enjoy this unconventional musical as much as I did, the dozens of children in the audience last weekend seemed to revel in kid-power and a story that challenged their intellect.

* Maui OnStage continues “Roald Dahl’s Matilda the Musical.” Music and lyrics by Tim Minchin, book by Dennis Kelly, directed by Jennifer Rose, choreographed by Camille Romero, and under the musical direction of Robert E. Wills. Performances are 7:30 p.m. Fridays and Saturdays, through Dec. 14; 2 p.m. Saturdays, Dec. 7 and 14; 3 p.m. Sunday, Dec. 8 and 6 p.m. Sunday, Dec. 15 at the Historic Iao Theater. Tickets range from $20 to $40. To purchase tickets for any Iao Theater event, call 242-6969 or order at www.mauionstage.com.

Eric Gilliom and Brian Kohne’s “White Hawaiian” has no second week engagement, but it was so immensely entertaining that it warrants a review. With hopes to tour the show, and due to the sold-out houses at the McCoy Studio Theater last weekend, a future encore seems both necessary and likely.

“White Hawaiian” is in many ways the multi-generational story of Gilliom’s showbiz family. In the one-man show, Gilliom plays his great grandparents, his grandmother Napua Wood, his mother, his father Lloyd Gilliom, himself, and even his sister Amy Hanaiali’i. Essentially a musical, “White Hawaiian” is also hysterically funny and seasoned with moments of pathos. The show crescendos as Gilliom recreates his Broadway debut in the mega-flop “Carrie: A Killer Musical.” The scene is one of the funniest I’ve seen on stage this season, and the actual, scathing 1988 video reviews of “Carrie” only heighten the uproarious laughter. A following reenactment of the cruise ship entertainer chapter of Gilliom’s career is equally funny. While performing on roller skates and armed with many comical costumes and props, Gilliom presents excerpts from “Man of La Mancha,” “Annie,” “CATS,” “The Wiz,” “Xanadu,” and many more in rapid fire succession.

These rarely seen musical theater talents of Gilliom hammer home who he really is in the show. In many ways, the script asks, “Who am I?” I believe the answer is that Eric Gilliom is an enormously talented song and dance man in the style of classic vaudeville, and in the family tradition of his grandmother, Napua Wood. Arguably, in an example of saving the best for last, the fast moving, one-act musical is one of the finest productions of 2019, and more than worthy of a lengthy, multi-island run.

Maui OnStage’s ONO! (One Night Only) series returns with a staged reading of “The Santaland Diaries” and “Season’s Greetings” by David Sedaris. This reading contains mature content and may not be appropriate for all audiences. The performance is at 6:30 p.m. Monday, Dec. 9 at Historic Iao Theater in Wailuku. The free ONO! events happen every second Monday of the month. For more information, visit www.mauionstage.com.

ProArts presents “The Reluctant Elf,” written and directed by Ally Shore. Everybody’s favorite buddy is back in this original story featuring all of your favorite Christmas songs. Performances are at 7:30 p.m. Thursday through Sunday, Dec. 19 through 22; 1 p.m. Saturday and Sunday, Dec. 21 and 22 at ProArts Playhouse in Kihei. Tickets are $15 for children under 12, and $20 for adults. For more information or to purchase tickets for any ProArts event call 463-6550 or visit www.proartsmaui.com.

Maui Academy of Performing Arts presents their annual production of “The Nutcracker.” This treasured holiday classic features hundreds of dancers, stunning costumes and beautiful choreography set to Tchaikovsky’s timeless music. Performances are at 7:30 p.m. Saturday, Dec. 20 and 3 p.m. Sunday, Dec. 21 in Castle Theater at MACC. To purchase tickets for any MACC event, visit the MACC box office, call 242-7469 or order at www.mauiarts.org.