‘Xanadu’ to take audiences on a nonstop ride 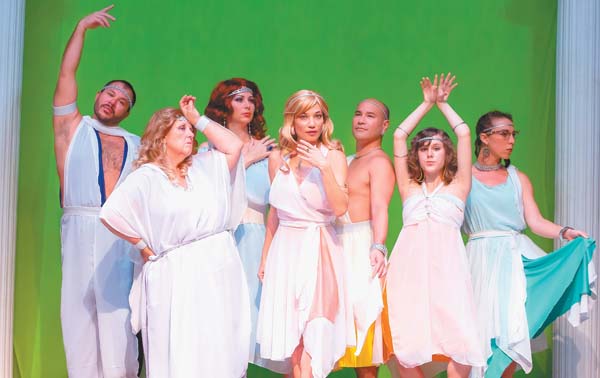 After the box-office and soundtrack successes of “Grease” and “Sgt. Pepper’s Lonely Hearts Club Band,” “Xanadu,” which starred Olivia Newton-John, was supposed to be the summer roller disco, megahit of 1980.

In fact it was uniformly panned and considered by many to be one of the worst movies ever made.

However, its soundtrack with songs by John Farrar and Jeff Lynne of Electric Light Orchestra fame was a hit.

In time the film became a cheesy cult classic, and in 2007 a tongue-in-cheek musical adaptation opened on Broadway to surprising, glowing reviews. Next weekend, Maui OnStage opens “Xanadu” at the Historic Iao Theater in Wailuku. 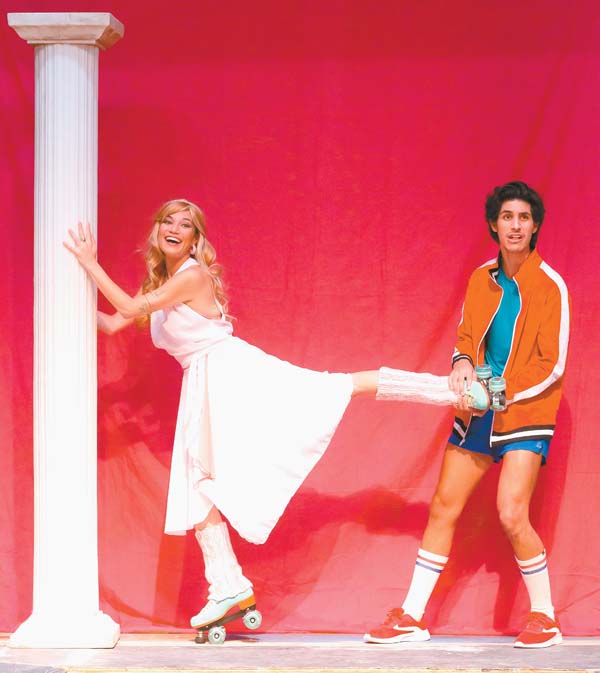 Maui OnStage had originally planned on presenting “A Chorus Line” as its spring musical, but due to a litany of setbacks ranging from rights, a directorial change, finances and casting, a first-time program change was necessary. Enter longtime friends, directors and choreographers Camille Romero and Kalani Whitford with a bold new plan — “Xanadu.”

“It just felt like this was something we could drop in in a hurry and be off and running. If you have to replace ‘Chorus Line,’ why not replace it with something fun and exciting,” said Whitford.

” ‘Xanadu’ only requires nine people, and it has a moderately simple set. If we had to switch, this would be the easiest to present well in a hurry. It seemed like a good idea, and it still does. Because it’s so much fun,” added Romero.

When it was announced that the film would be adapted into a musical in 2007, Broadway insiders reacted with mockery, skepticism and scorn. Even Douglas Carter Beane, who penned the book for the musical, was initially skeptical. According to Beane, while adapting the script he was influenced not only by the original film, but also by the 1981 fantasy film “Clash of the Titans,” prompting him focus more on Greek mythology and a lot of parody references.

I asked Whitford and Romero if “Xanadu” is a parody of itself. 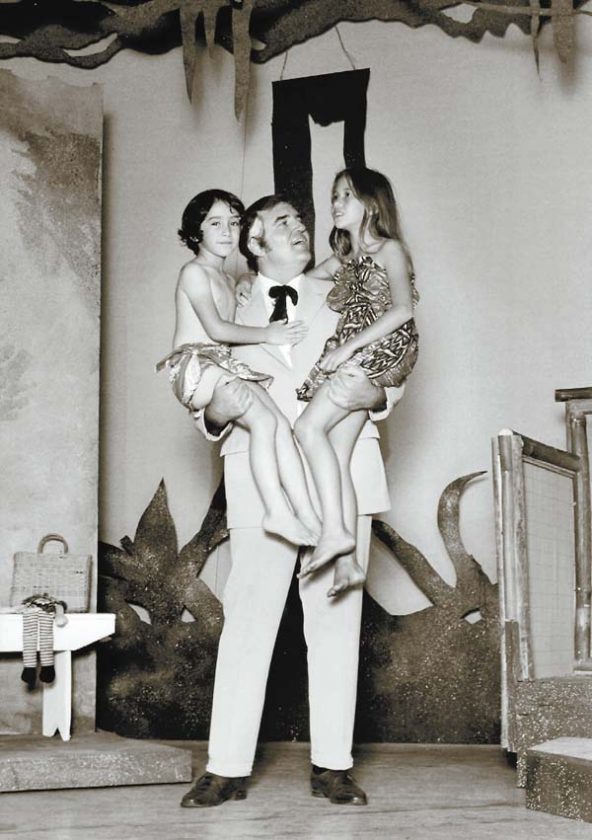 Kalani Whitford (left), Ron Vaught and Camille Romero are shown from a scene in “South Pacific” staged in 1976.

“Yes,” shared Whitford. “I love that Douglas Carter Beane said when he got the job that it was a bad idea. He essentially took the movie and ‘Clash of the Titans’ and Greek mythology, threw it into a blender and turned it into a parody of ‘Xanadu.’ It’s not a direct adaptation of the film, it’s jokey, and it’s constantly making fun of itself,” he shared. “Truthfully his book is a much more solid storyline,” said Romero.

In Beane’s adaptation, Greek muse Kira (Lia De Souza) of Mount Olympus, while roller skating in Venice Beach, Calif., meets a frustrated artist named Sonny (Brock Ambrose). Enter Danny McGuire (Francis Taua), an aging song and dance man who Kira inspired back when he owned a supper club in the 1940s. Together the two inspire Sonny to achieve the greatest artistic creation of all time — the first Roller Disco called, you guessed it, Xanadu. The musical’s score retains hits from the film soundtrack like “Magic” and its title track, but integrates two additional Electric Light Orchestra songs, “Strange Magic” and “Evil Woman,” plus Farrar’s “Have You Never Been Mellow,” popularized by Newton-John.

Romero and Whitford are directing the local production collaboratively and I asked if there was a process in sharing duties. “We decided that Kalani would take the lead on choreography and I would take the lead on staging. But given that system, we’ve had a lot of ‘what about this’ overlap and it’s been quite fun. It’s been interesting to work in a whole new way,” replied Romero.

“We talked a lot at first to get on the same page in terms of vision and the core idea, but it didn’t take long to be coming from the same place, especially with someone you know so well,” added Whitford.

Romero and Whitford know one another “so well” because they first performed together in the 1976 Maui Community Theater production of “South Pacific.” Whitford was 6 and Romero was 9. I asked if that was where they first met. “No,” said Romero. “I think it was in Kathleen Sime’s dance class on Main Street,” she clarified. “I remember I was 5 and they made an exception to take me a year early.” Inquiring how many times they have worked together, the two said at least 15 or 20 times in youth productions and four or five as adults.

“They wanted my skin tone to match Camille’s, so some woman put shoe polish on my skin every Friday and I had to leave it on all weekend. And, it was in the old Territorial Fairgrounds building so if you wanted to cross backstage, from stage left to stage right, you had to climb out a window, run around the back of the building and climb back in through another window,” he mused.

I asked if they had favorite scenes from “Xanadu.”

“Anything that Brock and Lia sing together,” replied Romero. “They have such a quality to their voices. It sounds like the movie soundtrack, but it’s not an imitation,” added Whitford. “I also love the end. People are going to die. It is something you’ve never seen on Maui,” he shared. “It’s quite a treat. The actors are roller skating quite quickly over ramps,” said Romero. “There’s no intermission so it’s a great, fast hour and a half. You have to see it; it’s ridiculously fun,” said Whitford.

* Maui OnStage presents “Xanadu,” book by Douglas Carter Beane, music and lyrics by Jeff Lynne and John Farrar, based on the Universal Pictures film with a screenplay by Richard Danus and Marc Rubel. Collaboratively directed and choreographed by Camille Romero and Kalani Whitford, under the musical direction of Kirsten Otterson. Performances are 7:30 p.m. Fridays and Saturdays, 3 p.m. Sundays, Feb. 28 through March 15 at Historic Iao Theater. Tickets range from $20 to $40. To purchase tickets for any Iao Theater event call 242-6969 or order online at mauionstage.com.

MHS Saber Theatre presents William Shakespeare’s “As You Like It,” directed by Roxanne Wada and with music by MHS Music Club. In Shakespeare’s original productions, music was often featured and MHS Music Club will set his lyrics to music to create MHS Saber Theatre’s first musical. Performances are at 6:30 p.m. Fridays and Saturdays, Feb. 21 through 29, 1:30 p.m. Saturdays Feb. 22 and 29 in the B-Building Courtyard on Maui High campus in Kahului. Tickets are $5 and are available at the box office before showtime or through www.mauihighschoolfoundation.com.

Seabury Hall Performing Arts presents “A Piece of My Heart” by Shirley Lauro, directed by Marsha Kelly. This powerful, true drama tells the tale of six women who went to Vietnam. Performances are at 7 p.m. Fridays and Saturdays, Feb. 28 through March 7 and 3 p.m. Sunday March 8 at A’ali’ikuhonua Creative Arts Center on the Seabury Hall campus in Makawao.

Tickets are $12 for adults, $10 seniors and $5 students. For more information or to purchase tickets online, visit www.seaburyhall.org.

ProArts will be holding auditions for Neil Simon’s “The Odd Couple (Female Version),” at 6 p.m. Monday, March 9 at the ProArts Playhouse in Kihei. The production will be directed by Dale Button.

All roles are open at this time, and actors of all races and ethnicities are encouraged to audition. Actors will be asked to read from the script. Sides and audition forms are available online. “The Odd Couple” will run April 17 through May 3. If you are not able to make this audition, contact ProArts Executive Director Lin McEwan at lin@proartsmaui.com or call 463-6550 to set up an alternate time. For more information and a complete character list, visit www.proartsmaui.com.