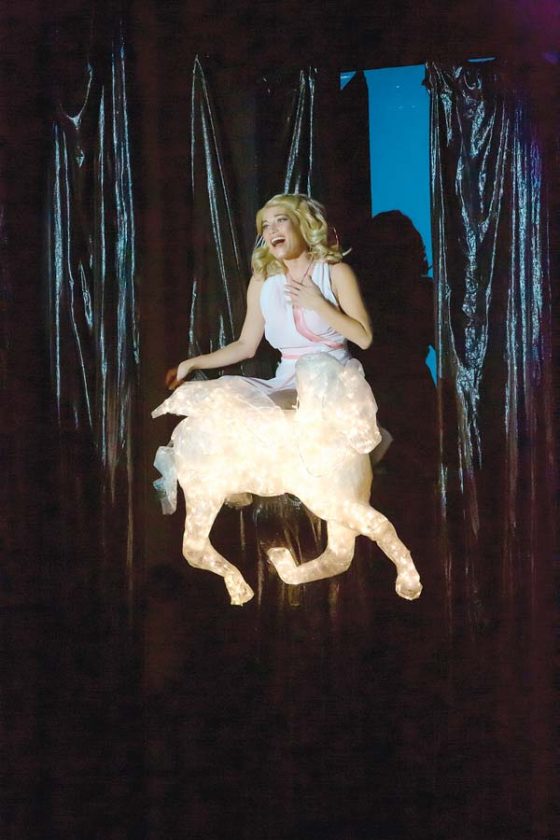 Lia De Souza concelas her identity as the daughter of Zeus in “Xanadu.” NICOLE SANCHEZ photos

Aside from a skeleton plot, the stage adaptation of “Xanadu” bears little resemblance to the 1980 film. Its libretto is unapologetic brain candy and Kalani Whitford’s and Camille Romero’s collaboratively directed and choreographed production at Historic Iao Theater in Wailuku is a wild ride of pure silliness for silly’s sake.

“Xanadu” the musical openly lampoons “Xanadu” the movie and even Olivia Newton-John. Clio (Lia De Souza), a daughter of Zeus — an ancient Greek muse — conceals her true identity as Kira by donning roller skates, leg warmers (a key plot point), and sports an Australian accent, which her sister Erato (Dejah Padon) deems “an impenetrable disguise.” Abject mockery abounds throughout with lines like, “He my baby daddy,” from Melpomene (Kristi Scott), “(expletive) I don’t know your life,” from Hermes (Barry Kawakami), “This is like children’s theater for 40-year-old gay people,” from Calliope (Rebecca Rhapsody Narrowe), and my personal favorite joke delivered by all the muses in unison, “Let this year, the year 1980, be known as the year all inspiration left the arts.”

As much as “Xanadu” is ensemble-driven nonsensical parody, the musical aspect of “Xanadu” is top shelf. De Souza and Brock Ambrose as Sonny, the object of Kira’s musings, offer live-on-stage, studio-quality lead vocals throughout, particularly on “Magic” and “Suddenly.” “Dancin’ “ is another highlight in a mash-up of the Andrews Sisters and The Tubes featuring Ambrose, De Souza, John Galvan, Kawakami, Padon, Stefani Peterson and Francis Taua. Yet the funniest company number is “Have You Ever Been Mellow.” Taua is extremely funny in “Mellow” as Zeus but offers even more laughs in his additional role of Danny McGuire, due to an uncommon accent choice that he describes as a cross between Patrick Warburton (Puddy from “Seinfeld”) and Adam West.

Eye candy, surprising special effects, lighting and costumes by the design team of Caro Walker, Amy Lord and Vicki and Jessi Nelson, respectively, only add to “Xanadu’s” many fun factors. Stage fog, disco lights, a mirror ball, projections, a centaur and Pegasus should engage any short attention spans as “Xanadu” rolls by sans intermission at just over 90 minutes. Not to be forgotten is a mini-roller rink and the skate-tacular, excessively outrageous finale. If Maui OnStage’s “Mamma Mia!” was fluff, “Xanadu” is rainbow cotton candy with Skittles and Pop Rocks inside. 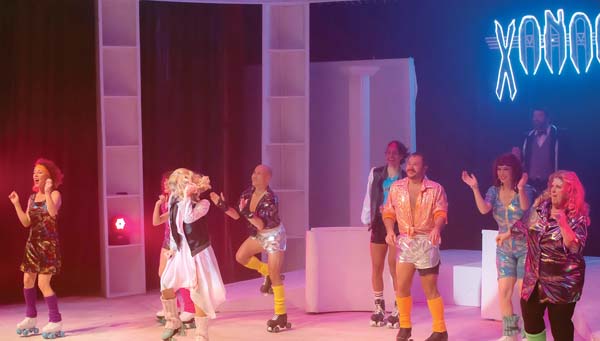 * Maui OnStage presents “Xanadu” book by Douglas Carter Beane, music and lyrics by Jeff Lynne and John Farrar, based on the Universal Pictures film with a screenplay by Richard Danus and Marc Rubel. Collaboratively directed and choreographed by Kalani Whitford and Camille Romero, under the musical direction of Kirsten Otterson. Performances are 7:30 p.m. Fridays and Saturdays, 3 p.m. Sundays through March 15 at Historic Iao Theater. Tickets range from $20 to $40. To purchase tickets for any Iao Theater event call 242-6969 or order online at mauionstage.com.