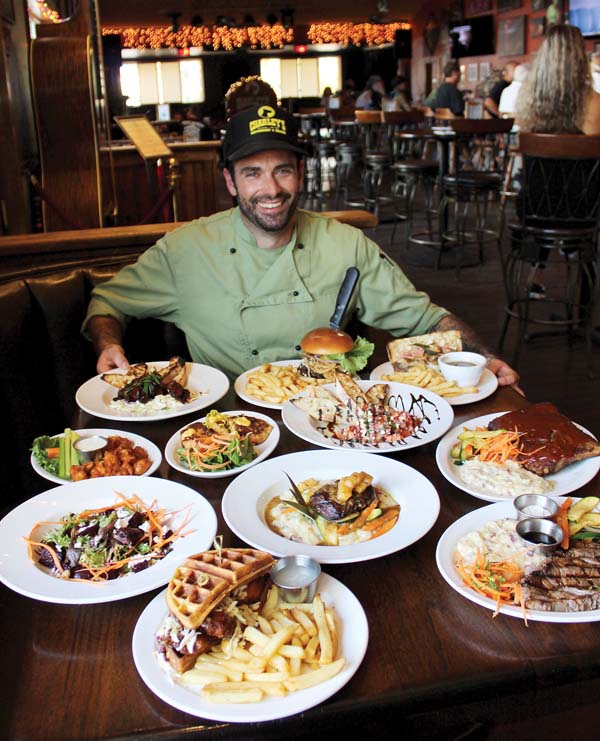 The Drunkin’ pizza is housemade dough hand-tossed and topped with mozzarella and Bleu cheeses, red-wine-poached jicama and house-smoked Canadian bacon on a fig, mango and raisin white-wine sauce. Fresh cauliflower bites are coated with beer batter, fried and tossed with Hawaiian red-hot sauce and served with carrot and celery sticks and Bleu cheese dip.

Beefy masterpieces such as grass-fed Maui Cattle Co. beef flat-iron steaks grilled to your desire and laced with cognac-pineapple cream; Black Angus prime rib wet-aged for 21 days and cooked and crusted in sea salt and rosemary; and burgers galore appeal to the meat eaters among us.

This exciting new menu is currently rolling out at the landmark Charley’s Restaurant & Saloon in Paia and it’s getting rave reviews each and every day as more and more diners get to savor it.

“Charley’s is now in its 48th year of being locally owned and operated,” Managing Partner Jonathan Herman says. “We took over from founder Jim Fuller back in 2011, and in the last couple of months, we’ve been very fortunate to get Chef Jesse Sword to lead our culinary team.”

Born and raised on Oahu, Sword worked in California and Oregon before coming home to the islands. 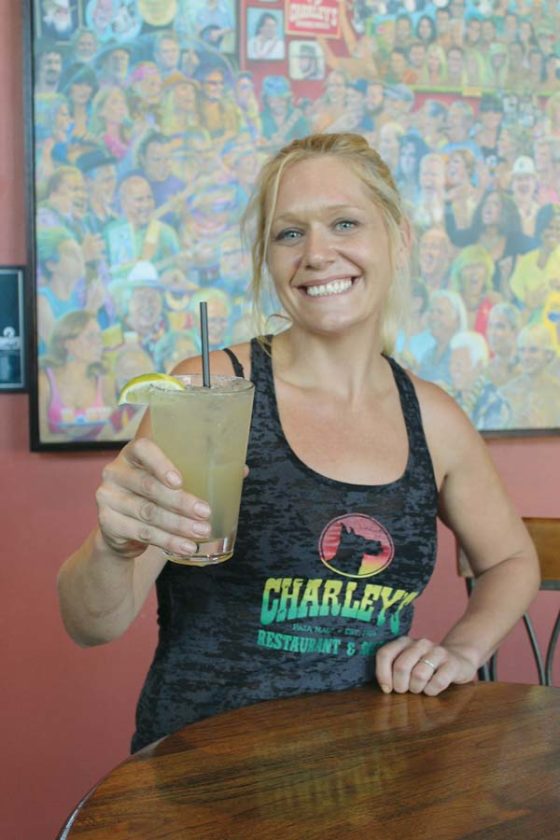 Server Jennifer Quick whisks a top-shelf margarita to one of the high-top tables.

“Jesse most recently cooked in Southern Oregon as owner of two restaurants there,” says Herman. “He not only brings his own smoker that we’ve set up outside in addition to our huge smoker, he’s got experience in restaurant ownership, management, menu development and life. He spent a lot of time on Maui before and he’s excited to be here with his new wife. He can work anywhere, but he chose Charley’s. He sees the 48-year history of this place and he wants to take it to the next level.

“The goal is to have the food be scratch made, grown or raised locally and affordable for locals. Even though we pay Wailea prices on the building, I don’t want to charge those prices” says Herman. “It’s nice to have a chef in the kitchen who knows just how to captain these changes.”

A lot of specials will regularly start to roll out including fresh fish, depending on what’s being caught. Even the bruschetta changes each week. Now, it’s a twist on traditional with feta added to tomatoes. It comes with grilled baguette, no garlic. It’s easy to gobble up, a real crowd pleaser.

“We only slightly tweaked the breakfast menu,” says longtime server Anne Holmes. “The Mexican huevos rancheros kills it every time.”

The Bloody Mary bar is still featured on Sundays and the 15-foot screen is opened on stage for football. It continues to be a top hangout for surfers, artists, rock stars and other celebrities. Willie Nelson remains a regular when he’s on island, his memorabilia is all over the place, and his Maui-born sons and he have performed there.

The house drinks still use ingredients from local farms and distilleries. The Maui Mule mixes Ocean Organic Vodka with fresh isle limes and such; and Charley’s famous Mai Tai blends Old Lahaina Silver Rum made right in Paia with fresh juices and tops it with Grand Marnier.

As far as the Drunkin’ pizza goes, it is just flying out the door.

“A couple of years ago, I had a restaurant at a friend’s Oregon winery and people went crazy for it,” says Sword.

One salad features Oko’a Farm beets grown up the street from Charley’s and then adds Surfing Goat Dairy chevre with a finish of roasted-strawberry balsamic.

“We’ve got a really good crew of seasoned cooks — knowledgeable and humble — and Jesse’s got these traits, too,” Herman says. “The menu’s different, but it’s still the same Charley’s.”

“We’re pushing people to tell us what they think,” says Sword of the menu. “We are looking for feedback.”

I say, the new menu rocks, and I’m headed back for more.

Charley’s at a glance:

• Hours: Breakfast is served from 7 to 11 a.m. weekdays and to noon on weekends. Lunch and dinner run from 11 a.m. until closing. Happy hour is from 3 to 6 p.m. daily with discounted drinks and pupu.

• Entertainment: Dinner music is from 6:30 to 8:30 p.m. Tuesdays and Wednesdays. DJ Nu-Mark, the founder of Jurassic 5, spins Friday; and Maui Pranksters play at 9 p.m. Saturday.

• Sushi nights: Sushi Chef Ivan Bersamin is on a roll from 5 p.m. to closing Tuesdays to Saturdays.