Kick up your heels, sip a pint, savor Irish cuisine at Maui pubs and restaurants on St. Paddy’s Day 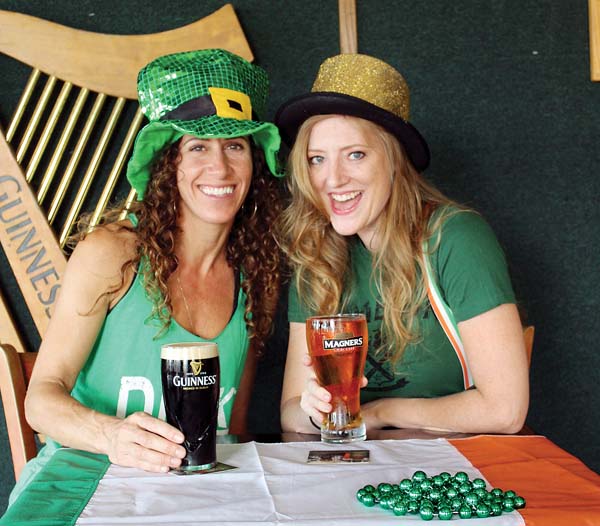 Searching for that pint of fun at the end of the Maui rainbow?

Then say, “Slainte!” Irish for “to good health!” at St. Paddy’s Day celebrations in select establishments island wide. Do wear green, or you may just get pinched. And brush up on famous Emerald Isle songs such as “Irish Rover,” “Whiskey In A Jar” and “Molly Malone.”

Party central on island for St. Paddy’s Day on Saturday will be Mulligans on the Blue in Wailea. Several other fun establishments such as Moose McGillycuddy’s in Kihei, Pint & Cork in The Shops at Wailea and ‘Umalu at the Hyatt Regency Maui Resort & Spa in Kaanapali will put on parties, too. Make sure you have a designated driver or catch a taxi or Uber if you wish to imbibe in a frothy Guinness or three.

“As Oscar Wilde once said, ‘I can resist everything but temptation.’ And who could not be tempted to celebrate St. Patrick’s Day on March 17?” asks Mike O’Dwyer, owner of Mulligans on the Blue and a Clonmel, Tipperary, Ireland, native.

Doors open at 11 a.m. and there will be a $10 cover charge until 4 p.m. A cover charge of $20 per person will be in effect from 4 p.m. to closing. Kick up your heels to non-stop music, authentic foods of Ireland and fun beverages. 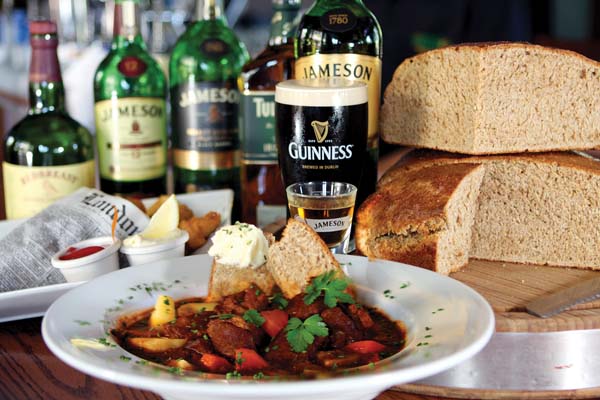 Irish lamb stew and Harp-battered fish ’n’ chips will be among authentic offerings. Mulligans on the Blue photo

” ‘Cead mile failte’ as we say in our native tongue or a ‘hundred thousand welcomes’ to the closest place you can get to Ireland in Hawaii,” O’Dwyer continues.

“Irish and locals alike will don the green, wet the shamrock and down the Guinness for the 17th annual St. Paddy’s Day party at Mulligans on the Blue this Saturday,” he adds. “Irish eyes will be smiling once again as we lay on the blarney and unite all of the cultures and races on Maui under and over the rainbow with the biggest St. Paddy’s Day party in the Pacific.”

Irish music by Murray Thorne, Willie Wainwright and Pete Sebastian will kick it off from noon to 2 p.m. Time in the Sun Band will perform from 2:30 to 4 p.m. and Celtic Tigers from 5 to 8 p.m.

“This year we are embracing the fantastic music of the island by featuring Maui’s most famous band, Ekolu, at 8:30 p.m.,” says O’Dwyer.

Mulligans is fun every day and night of the week, but it is absolutely over the top on St. Paddy’s Day, ringing in the birthday of the Welshman who not only drove out the snakes in Ireland, but brought Christianity to that country. 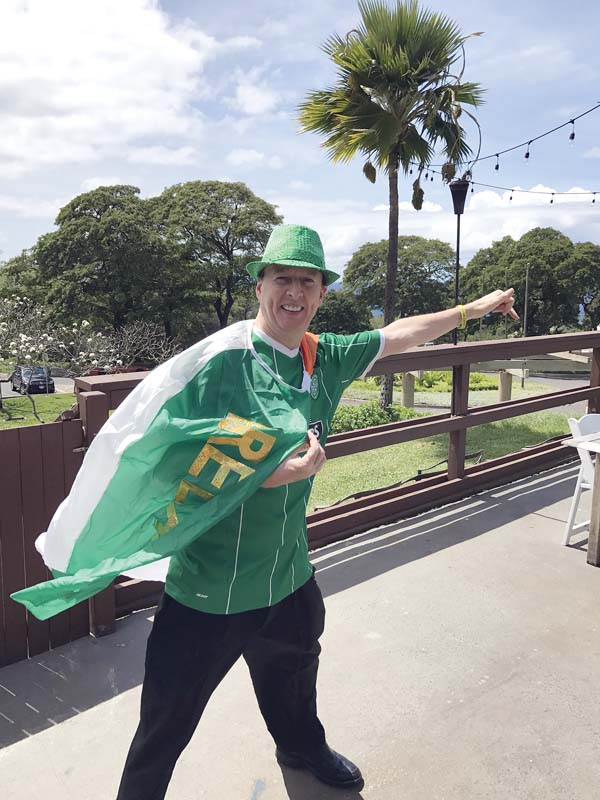 “A traditional St. Paddy’s Day on the Emerald Isle involves mass and a parade and a few ‘scoops’ or ‘pints’ and wearing of the shamrock, which Welshman Patrick brought to pagan Ireland to teach and explain the Holy Trinity,” says O’Dwyer. “As the three leaves represented the Father, the Son and the Holy Ghost.

“Of course, not all things Christian will be happening at Mulligans, but we will serve up huge portions of our adopted corned beef and cabbage, which first started in America in the late 19th century by Irish settlers as it was considered very similar to bacon, an Irish staple served with cabbage and potatoes with their skins on,” O’Dwyer explains about the Americanized dish that is rarely seen in his homeland.

Mulligans has flown in acclaimed Irish Chefs Damien Ryan from Kilkenny and Sean Cuddy from Dublin to prepare the Irish feast that will be available a la carte at very moderate prices.

“It takes an army to prepare the feast as we will have 30 cases of corned beef slow cooked and prepared to perfection, 300 pounds of mahimahi ready for the Harp Lager battering of our fish and chips, and 100 pounds of lamb for Irish stew,” says O’Dwyer. “All of our Irish food will make the angels sing.”

The corned beef, for instance, will be thickly sliced and served with braised Kula cabbage, mashed potatoes, parsley and stone- ground mustard cream. The lamb stew will be braised in Guinness stock with carrots, parsnips, onions and potatoes. 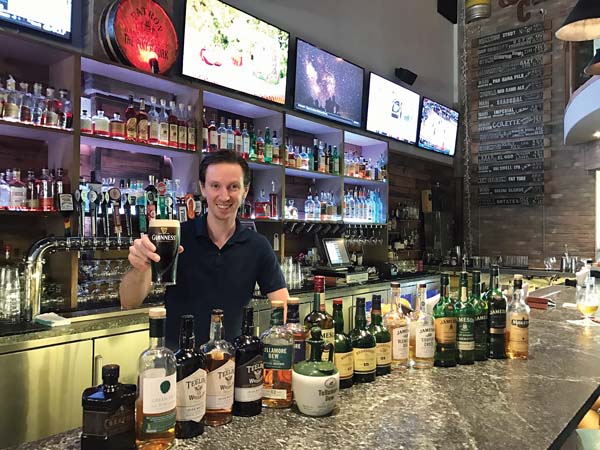 The Pint & Cork Bartender Griffin Lawler showcases dozens of Irish whiskeys featured at the gastro pub in The Shops at Wailea, which are served in addition to a hundred other fine whiskeys. The Maui News / CARLA TRACY photo

“Chefs Damien and Sean will oversee all cooking and will be on hand to drink some Guinness and Jameson and tell a few stories if needed,” O’Dwyer adds. “As we celebrate Irish ways and customs, the whole of Ireland will have gone to bed or be passed out as we are 10 hours behind them.”

Besides the above-mentioned Guinness Stout and Jameson’s Irish whiskey, Kilkenny and Harp beers and Tullamore Dew, Powers, Midleton, Paddy and more, will be flowing like the River Liffey.

“This year we will be featuring Magners Cider on draft straight from my home town of Clonmel,” says O’Dwyer. “It is the best apple cider in the world, of course. In Ireland it’s called Bulmers, but due to trademark is sold as Magners over here. My grandfather Michael O’Dwyer worked at the factory there all his life until he retired after 47 years (the only job he ever had) and I still have the gold watch he got on retirement with his name on the back.”

“To finish with another Oscar Wilde quote, ‘Work is the curse of the drinking class.’ So come ‘slainte’ to your health as we say back home in the boglands,” concludes O’Dwyer. 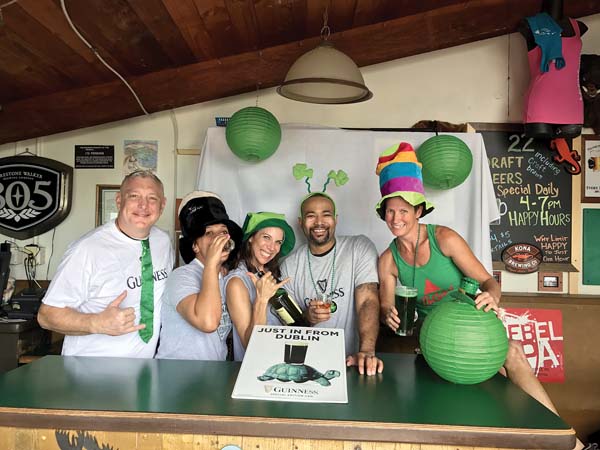 The Moose McGillycuddy’s team gears up for its annual St. Patrick’s Day party in Kihei. Come and enjoy the food specials of corned beef and cabbage and Irish stew from 11 a.m. until gone. The Maui News / CARLA TRACY photo

You may kick up your heels from 11 a.m. to 11 p.m. at ‘Umalu, the poolside eatery and bar at Hyatt Regency Maui Resort & Spa in Kaanapali.

Sip Guinness beer in cans, Jameson Irish whiskey and green mimosas and check out the storm of food specials being cooked by Hyatt Executive Chef Greg Grohowski and his expert team. For more details, you may call 661-1234.

At The Pint & Cork, one of the island’s premier gastro pubs and sports bars in The Shops at Wailea, drink specials will flow from 11 a.m. all the way to 2 a.m. the next day with Guinness and Guinness Blonde on tap along with dozens of fine Irish whiskeys and many others.

“We have enough fine whiskeys to choke a horse,” says Managing Partner Scott Pacer about the selection.

The Pint & Cork Executive Chef Maka Kwan is Korean, and he says that to pay homage to the Irish holiday, on St. Paddy’s Day, he will be “Korish.” The kitchen is open until midnight daily.

“Of course, we’ll be doing corned beef brisket and cabbage and we make all of our own sausages,” Kwan says. “And I’ll make two types of shepherd’s pies, totally unusual from what you’d expect.”

One is a Hawaiian seafood shepherd’s pie brimming with scallops, shrimp, mahimahi and snapper in a rich bechamel sauce with clam stock and roux.

“It will be served piping hot with mashed potatoes on top,” Kwan says. “I bake it and it comes out bubbly and gooey. I grate some parmesan cheese to finish.”

The other version at The Pint & Cork is pork guisantes shepherd’s pie packed with tender pork and peas inside.

In addition to St. Paddy’s Day, The Pint & Cork is offering 20 percent off to kamaaina from 5 to 9 p.m. Mondays and Tuesdays through March with presentation of a valid Hawaii ID.

“This March discount promotion is our way of saying ‘thank you’ to our island community,” says Pacer. “Kamaaina deserve to have a great time at The Pint & Cork and we want to show them our appreciation for their continued support.”

And don’t forget it’s March Madness with NCAA College Basketball and The Pint & Cork boasts 17 flat screen HD TVs from which to watch.

“You can’t find a better place to enjoy the game than here,” says Pacer.

In Kihei, Moose McGillycuddy’s will be doubling your Dublin fun with food and beverage specials from 11 a.m. to 10 p.m. Saturday for St. Paddy’s Day with the bar open until at least midnight.

“Moose’s has been in Hawaii for 38 years, celebrating St. Paddy’s Day like no other place,” explains Assistant Manager Kristen Thompson. “Drink green beer, eat traditional Irish food and be silly. And we’ll have lots of giveaways.”

Sip from Irish Car Bombs to Black & Tans to green Bud Light drafts. Irish Chi Chis will also tempt you to kiss the Blarney stone. Oops –there is none there.

“Shepherd’s pie is made with our famous Guinness beef stew and topped with mashed potatoes,” says Thompson. “This favorite is truly amazing.”

Other specials will include fresh roasted corned beef with au jus and steamed cabbage and carrots, and corned-beef sandwiches on grilled rye bread.

In addition, from 4 to 10 p.m. each and every Friday, it’s Irish Night serving fresh corned beef dinners and Guinness and Irish whiskey specials.

“We’ve got 22 beer taps up here,” says Managing Partner Penny Joe Putnam. “It’s a really nice addition and there’s something for everyone.”

“Moose’s is the largest sports bar in Kihei with over 30 TVs and big screens to watch every game,” adds Thompson.

“Moose’s is a family restaurant that hosts weekly events such as Monday night bingo that is free with great prizes for everyone of all ages. We have free Wednesday Trivia Night. Bring your brain and a creative name for your team with from one to six people per team welcome.”

Nevah Too Late will get the crowd going with live music and dancing. Bid at the live and silent auctions. Proceeds will benefit service projects in West Maui.

Cost of $95 in advance and $115 at the door includes buffet and two drink tickets. For reservations, call Heidi Dollinger at 359-4245.