Leoda’s bakes pies and then some 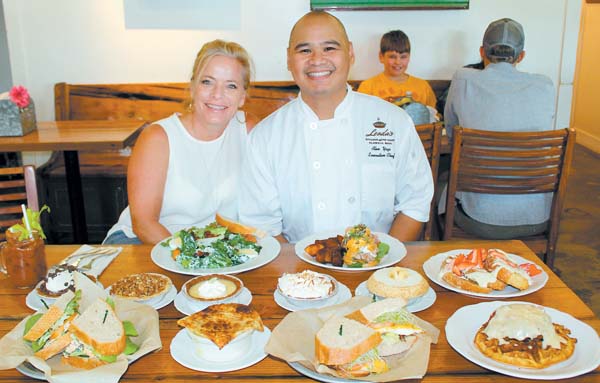 Leoda’s Kitchen & Pie Shop in Olowalu was first rocketed to fame on the Cooking Channel’s “The Best Thing I Ever Ate” show a few years back. The team continues to draw in diners with freshly baked pies and other comfort foods.

“When we opened in 2011, we were baking about 100 pies per day,” says GM Rosie Robbins. “Now, it’s upwards of 700 pies with the same recipes, same process and same quality. We keep up with it and it’s fun to watch and participate in.”

Executive Chef Alex Yago has been with the parent company, Na Hoaloha Ekolu, for a number of years, opening Leoda’s and cooking at Old Lahaina Lu’au before returning to his original post.

“I was so excited about Alex coming back. I knew that we would be a good team,” says Robbins. “We feed off each other. We both have a lot of energy and it goes to the staff. Our positivity rubs off.”

From Maui, Yago graduated from what used to be called Maui Culinary Academy. He’s traveled through Asia from Japan to China to Korea and also has visited New York and the West Coast.

“I like to incorporate cuisine from what I’ve seen out there,” says Yago. “It’s homey food. Our specials all remind me of my mom and that’s the goal, and it feels so good.”

Leoda’s opens for breakfast from 7 to 10 a.m. and lunch is served all day. So if you want to enjoy a savory pie or a sandwich in the morning, it’s easy to go that route with your meal cravings.

“We won the best breakfast in the Aipono Awards,” says Robbins. “That’s exciting, because we’re actually known for our lunches. And we have daily specials that rotate for dinner.”

Sundays, enjoy fried chicken and all of the fixings. Mondays, dig into Meat Loaf Madness. Tuesdays, steak plates are the special. Wednesdays, it’s homemade pasta. Thursdays, Thanksgiving dinner is served all year round. Fridays, it’s seafood such as shrimp, fish and scallops. And Saturdays, Yago cooks up a storm of barbecue beef, ribs, brisket and pulled pork. All of the dinner specials start at 4 p.m.

“The thought behind the set specials is the consistency at Grandma’s house,” says Robbins. “We’re obviously so busy here, yet we’re able to keep it consistent. A lot of our guests make Leoda’s their first stop on Maui and make it the last stop on their way back to the airport. It continues to amaze me. The Olowalu area has been brought to life. It’s just jumping.”

Leoda’s phenomenal bread is baked fresh daily and is a recipe from Zingerman’s Deli in Michigan. Choose from butter white bread to “Hapa,” which is a local term for “mixed.” Leoda’s version is part butter white and part wheat. Other breads are rye and multi-grain. Opt for fillings of pastrami, seared ahi, spicy tuna, club and pulled pork.

Savory pot pies will keep you coming back. As icing on the cake, sweet pies comes in varying sizes. Varieties range from Olowalu lime to banana cream to apple crumb.

“A lot of people come right from the beach for fries and pies,” says Robbins. “The bottom line is, we are firm believers in our staff. They’re such hardworkers, and we are so grateful for them.”