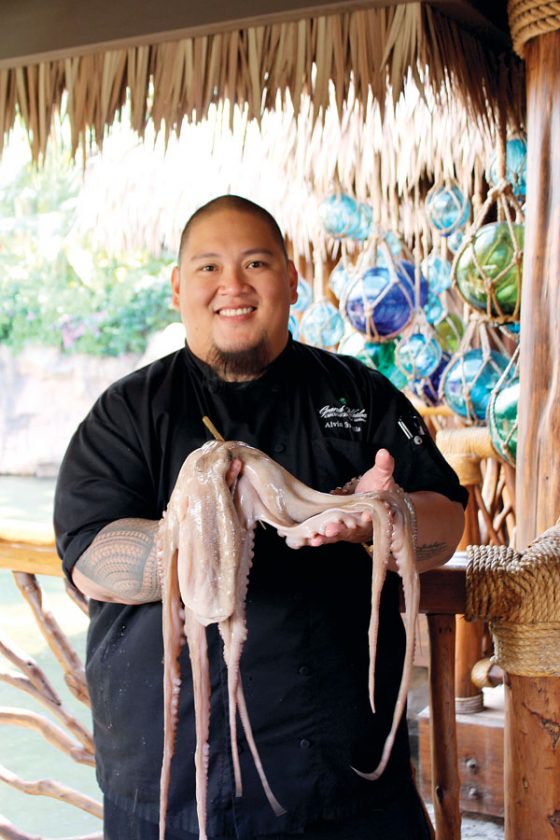 On social media, Alvin Savella is known as the “Kitchen Assassin,” delighting his many followers with killer food pictures of the tempting kind.

In print media, he’s Maui’s current “Chef of the Year” as named by a local magazine in its annual contest. He’s also chef de cuisine at Humuhumunukunukuapua’a, the signature dinner house at Grand Wailea, A Waldorf Astoria Resort, and he’s slaying it with a new menu of foods from Hawaiian-style ahi and hamachi poke artfully arranged like a checkerboard to crowd-pleasing huli-huli chicken with charred-pineapple relish and an intense umami butter.

“This restaurant is so iconic, just the feel of being in here is exciting to me,” says the Lahaina-born-and-raised chef, who from a young age learned the art of cooking from his family members.

“Back in my small-kid days, my family brought me to Humu for a visit. My cousin worked here taking care of the lagoon that surrounds the restaurant. I’ll never forget it, we were all sitting around and enjoying, and my cousin just popped out of the lagoon and surprised us.”

Savella is talking about the million-gallon saltwater lagoon that the thatched-roof island of a Best Resort Restaurant is situated in the middle of — just a rubber-slipper toss from the Pacific Ocean. It’s the “Blue Lagoon” times 10 with expansive views of humpback whales and boats zipping about in the hours before the sun dips into the horizon and the stars come out at night. 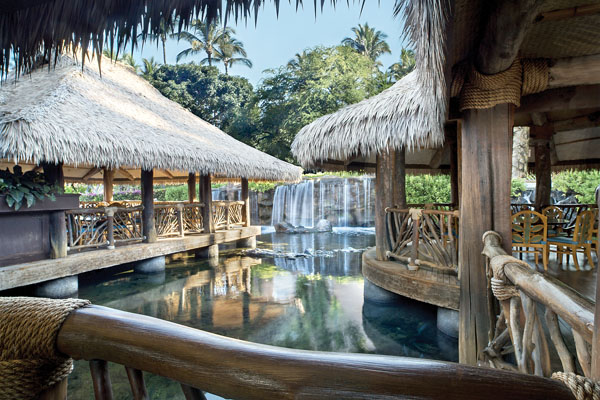 A thatched roof restaurant, Humuhumunukunukuapua‘a is set in the center of a million-gallon saltwater lagoon complete with waterfalls and bronze sculptures. Grand Wailea photo

“It feels like old Hawaii,” adds Savella. “You get the perfect sunset, the ocean views and the waterfalls, too.”

Savella was first written up in the Maui Scene when he was chef at Pulehu, an Italian Grill at the Westin Ka’anapali Ocean Resort Villas and again when he ruled the roost of The Banyan Tree at The Ritz-Carlton, Kapalua, both in West Maui.

Grand Wailea’s Executive Chef, Ryan Urig, snagged him last fall as The Banyan Tree closed for a renovation (opening next month), and Savella jumped ship to work for the first time in South Maui.

He’s got big shoes to fill, replacing Mike Lofaro who has moved up the chef ladder to become exec sous of the resort, but Savella brings his knowledge of Hawaiian culture and a passion for cooking to the Grand — and he’s got classical training in a Bachelor’s Degree in Culinary Management from the Art Institute of California Los Angeles. I say his food is always off the charts in taste and presentation. He’s fun and likes to schmooze guests in the dining room, too.

“The pressure is always on,” he says with an ear-to-ear grin, an indicator of confidence and capability. “To come in after a superstar like Mike Lofaro and Chef Isaac Bancaco before him is an amazing opportunity. Humu has such a huge reputation, and I hope to keep the legacy alive.” 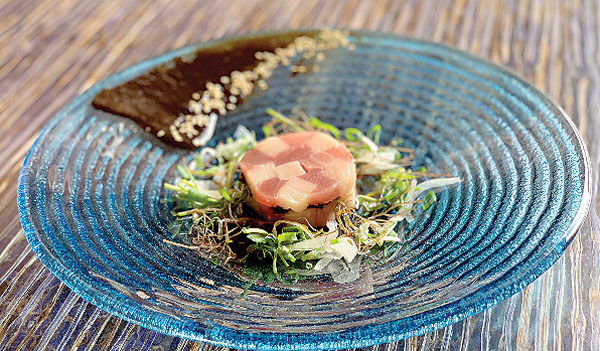 The new ahi and hamachi poke is arranged in a checkerboard. Grand Wailea photo

Savella creates a glazed-octopus appetizer that is done like a deconstructed squid luau, a Hawaiian favorite with the leaves of the taro plant, squid or tako and coconut milk stewed together. In his ingenious version, he slices the octopus and serves it separately from the taro stew, with a pork dumpling filling in as kalua pork, and “ikura,” or “salmon roe,” and vine-ripened tomatoes as an innovative twist on lomilomi salmon.

“I like using squid ink in some dishes because I think the black look on the plate seems so unnatural and it’s also intriguing to the eye,” says the chef. “Right now, we’ve got English peas.”

With all of the rainy and cool weather of late, the Kona half-lobster ramen serves a deep need as a comfort food. The aromatic broth is satisfying and the noodles are slurp worthy, for sure.

“The ramen’s been a signature for me for awhile. I make my own broth, using chicken bones and lobster shells and add red miso and coconut to it. The egg we poach at 63 degrees, soft poached.”

Savella’s new Hawaiian-style poke is a work of art. Do take a photo before you eat it. With chunks of red ahi and white hamachi presented with Maui onion, “inamona,” or “kukui nut,” chili oil, tobiko and nori sheets, it’s a roll-your-own affair. Interactive and playful, the poke fun won’t last long as it will disappear in a heart beat.

“I added umami to it with what I call a ‘noriyaki’ sauce.” he says. “I’m also doing a special dish throughout the month of March in support of the Localicious ag promotion across the state. A dollar of each dish will go to local charities”

The Huli Huli Puna half chicken will fill your belly with flavorful tastes. It comes with garlic-fried rice, maitake mushrooms and charred pineapple relish.

“I rub the half chicken with Korean spices and li hing mui powder, grill it and finish it with roasting,” he says “I add a soy dashi and emulsify it with butter.”

For dessert, take a walk on the wild side with the Humu chocolate garden served with chocolate “stones,” pistachio “moss” and cocoa gelee and his housemade sorbets and ice creams. While this dessert and other favorites came before him, Savella is taking Humu to a whole new level.

HUMU at a glance:

• Where: Located oceanfront at the Grand Wailea, A Waldorf Astoria Resort.

• Kamaaina deals: Those with valid Hawaii ID will get 20 percent off food bill.