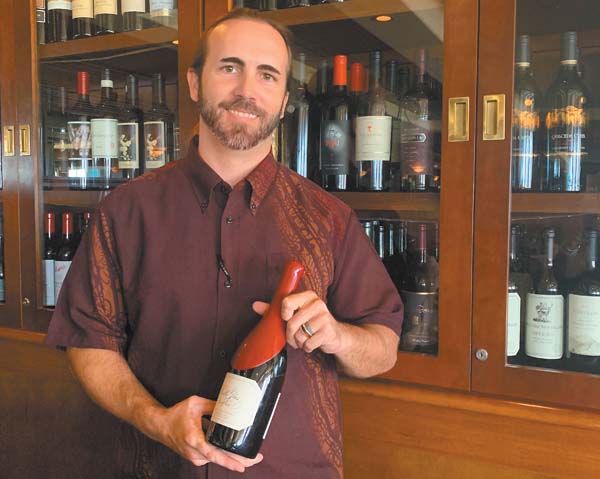 Lahaina’s new General Manager, Brandon Deatherage, showcases a bottle of Belle Glos wine that will be poured at a special dinner there on April 4. Ruth’s Chris photos

Ruth’s Chris Steak House is a fine-dining restaurant franchise, and for many on the island, it’s for special occasions only due to its beefy prices.

Just come in to dine at either Ruth’s in The Shops at Wailea or in the Outlets of Maui in Lahaina. The spring promo features a salad, tender and juicy filet mignon paired with plump shrimp, and an accompaniment such as au gratin potatoes. The price is $45.95 per person.

Discerning steak house regulars know that this is a fantastic fine-dining deal, costing less than even than the bi-annual Restaurant Week Wailea promo. Plus, you may dine anytime from 5 to 10 p.m.

“It’s such a great value,” says Ruth’s Chris Wailea General Manager Randy Spencer. “The spring promotion is an opportunity for both kamaaina and visitors to come in and enjoy our restaurant.” 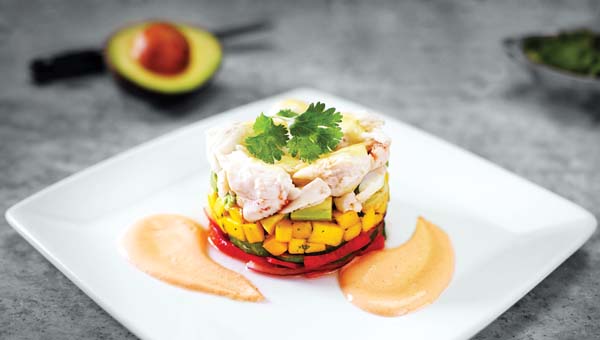 “This price point gives a lot of people a chance to experience our restaurant, which was renovated beautifully last year,” says Bader, who also does the Prime Time sunset menu from 5 to 6 p.m. nightly. That’s also a good deal at $54.95, when you’re talking in terms of the creme de la creme of fine-dining institutions.

Back to Wailea, with the influx of capital from the corporate office, the restaurant had a nice face-lift last fall. Besides the kitchen and other areas that you don’t see, the bar and lounge really pop.

“With one of the best happy-hour menus on the island and now expanded seating, we’ve raised the bar on the traditional steak house lounge,” says Spencer. “Relax over a hand-crafted cocktail and make your way around our award-winning wine list, savor appetizers such as oysters Rockefeller, veal Osso Buco ravioli, sliced rare filet mignon carpaccio, mushrooms stuffed with crab meat and more.” 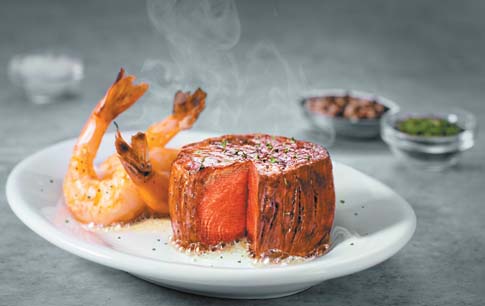 A juicy filet mignon is cooked to perfect doneness and paired with plump shrimp.

You may even savor the Prime Time or the Spring Surf & Turf in the lounge and also keep an eye on your favorite sporting events on TV.

“People were asking us to open earlier for the lounge. Now we open the bar at 4 and dinner it starts at 5 p.m.,” says Spencer. “It’s insane. Creating the new lounge is the best thing that we did as far as any new addition. It has its weight in gold.”

This week, Spencer will debut a new wine program with discounted wines by the glass to draw more budget-minded diners into the door.

“I’ve created a page today — manager’s picks or sommelier’s picks with a bunch of wines by the glass that will be of value –even though they are high end.”

Both locations still do Wine Wednesdays at 25 percent off select bottles. Kamaaina discount nights are Sundays and Mondays with 15 percent off food. This deal does not pair with other promos.

The Belle Glos Tastemaker Dinners will be uncorked April 4 in Lahaina and April 6 in Wailea (another sold-out dinner will be held earlier).

“The Belle Glos dinners will feature five courses with wines,” says new Ruth’s Chris Lahaina GM Brandon Deatherage, who brings 20 years of experience to the table, most recently from Longhi’s.

“Whatever the occasion, Ruth’s Chris Steak House is the perfect spot to gather,” adds longtime Director of Marketing Emi Chang Espinda. “We feature unparalleled cuisine, sumptuous surroundings and meal service that’s accomplished yet never fussy — these are the elements of a memorable and special evening.”

Ruth’s Chris at a glance:

• Maui restaurants: Ruth’s Chris Wailea is upstairs in The Shops at Wailea. Ruth’s Chris Lahaina is in the Outlets of Maui mall on Front Street.

• Promos: The Spring Surf & Turf Dinner includes salad, filet mignon, shrimp and accompaniment. Cost is $45.95 per person, plus tax and tip. Belle Glos wine dinners are coming in April for $115 per person.

• Kamaaina discount: Those with valid Hawaii ID get 15 percent off food Sundays and Mondays on the regular menu.