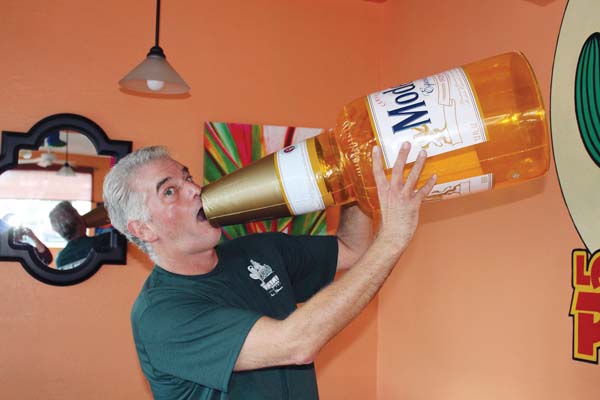 John Hargrove, the longtime owner of Las Pinatas clowns around with a giant Modelo beer. The eatery is celebrating its 25th anniversary this year. The Maui News / CARLA TRACY photos

This Sunday on “Cinco de Mayo,” also known as the fifth of May, Maui eateries with a Mexican slant will all be swinging like pinatas.

You may savor the whole enchilada from authentic Mexican foods to live music to icy cervezas, the latter giving the smokin’ hot holiday its silly yet oh-so realistic “Cinco de Drinko” nickname.

Here are a few restaurants from which to booze, er, choose. Just be responsible, and if you drink, don’t drive.

Set in its own free-standing building at Honokowai Marketplace, Nachos Grande will kick up its heels for Cinco de Mayo. Daily hours are 11 a.m. to 2 a.m., with food served until 9 p.m. 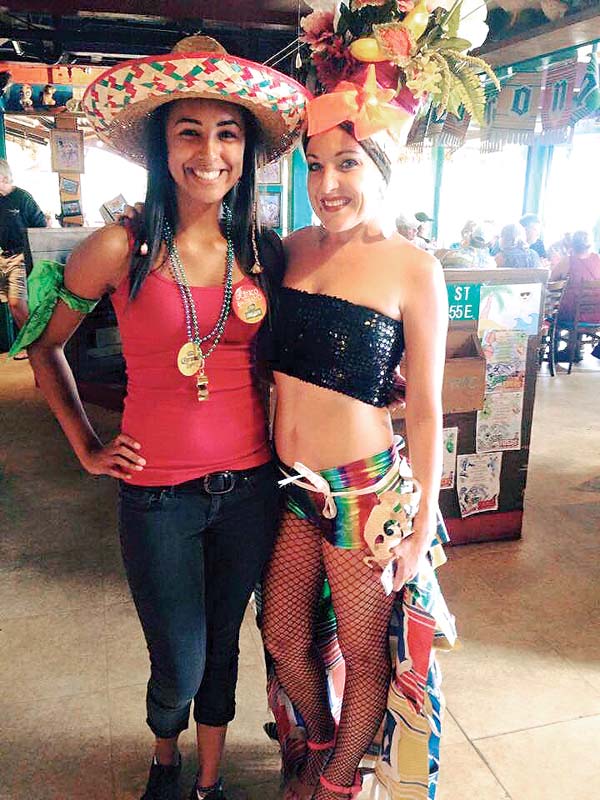 Fred’s Mexican Cafe employees will wear sombreros and Carmen Miranda attire to get into the groove.

“Miguel Reyes is from Michoacan, a state of Mexico, and he’s really turned the kitchen around,” says owner Margaret Gerner. “It’s what we call Mexican-Mexican cuisine. It’s not Tex Mex. He has his own little touch, and people love it.”

“I’ve been a chef now for 26 years,” says Reyes. “Remember Chico’s Cantina? I was working there as a teen. I cooked at Moose’s, Mango Cafe and more.”

For Cinco de Mayo, Reyes will tempt with chile verde, carnitas and carne asada burritos, soft tacos filled with your choice of chicken, pork or shredded or ground beef and he’ll also cook up batches for ground beef nachos.

Reyes also lays claim to concocting the “hottest salsa in the world,” aka “fantasma,” made from ghost peppers.

“I offer it to people and most like it when they try it. Many are fanatics when it comes to their salsas. I saw one guy dump a whole ramekin of salsa on two tacos and he ate every bite.” 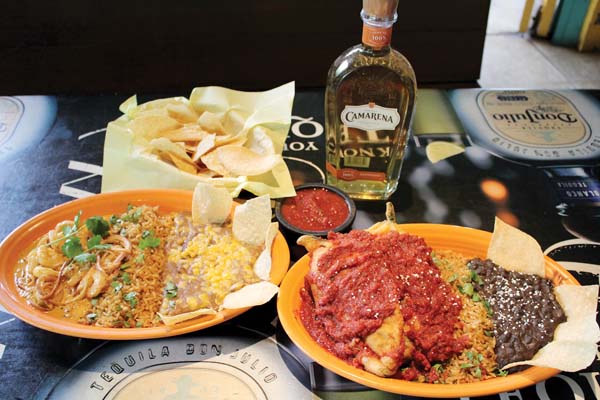 Fred’s Mexican Cafe food and drink will be plentiful on Cinco de Mayo.

Las Pinatas of Maui will celebrate its 25th anniversary Sunday with food and drink specials in its location off of Dairy Road in Kahului (near Tin Roof).

“I’ve been in the nostalgic mood, as I contemplate 25 years of Cinco de Mayos here,” says Hargrove. “My dad, Steve, and his wife, Lesley, moved here on his 50th from the corporate world in Dallas. They took over May 1, 1994, and never looked back. I got here in 2003 from San Francisco with my sons and their mom. I was GM for seven years before they retired, or I fired them, and then became the owner,” he jokes about the transition.

“Now the kids we fed are grown up, and we feed second- and third-generation kids as customers.” 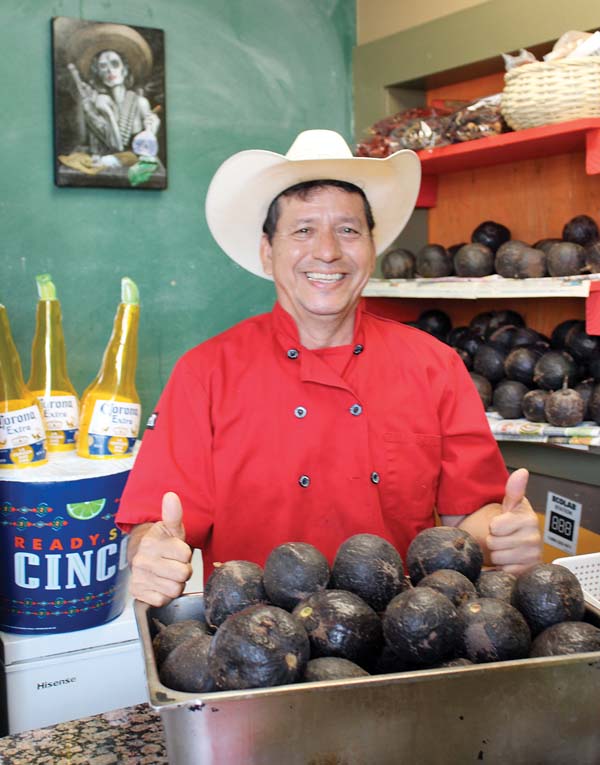 Nachos Grande Chef Miguel Espinosa Reyes will be mashing up a storm of avocados for guacamole to go with his fantasma, or “ghost pepper,” salsa, which he claims is the “hottest in the world.”

As far as Cinco de Mayo goes, “We serve as a family alternative for those who want to acknowledge Cinco de Mayo but who don’t want to dance on the tabletops. But don’t get me wrong. We still get rocking here. Las Pinatas has just always been about the food more than the beer.”

Happy hour specials will run all weekend with two beers for $6, and $1 discounts on kitchen-sink burritos, quesadillas and nachos, and Texas-style smoked brisket and California-style smoked tri tip will be cooked and served until gone. Hours are 9 a.m. to 9 p.m. daily.

“We also serve Bohemia, Modelo Negro and Especial, Corona and Corona Light, Dos XX Amber and Lager, Pacifico and Tecate,” he adds. “It’s got to be the cheapest on island at two for $6.”

A sea of pinatas hangs from the ceiling, from Maui-centric fish to dolphins to a hand giving the shaka decorated with green, red, yellow and black reggae colors — all made by developmentally disabled adults who are clients of ARC of Maui nonprofit. For more details, call 877-8707. 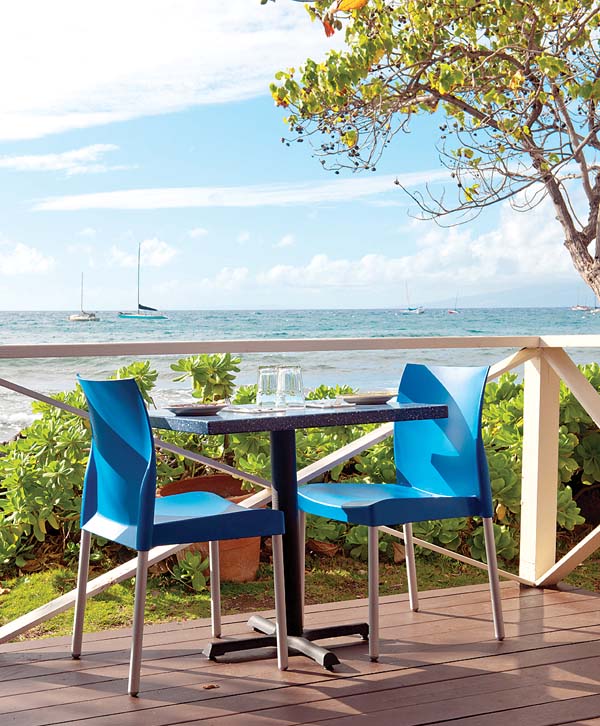 The lanai of Frida’s Mexican Beach House on Front Street will be jumping with mariachi music and braised lamb in chipotle and chile ancho for tacos.

Fred’s Mexican Cafe below Moose McGillycuddy’s in Kihei will be sizzling like frijoles in a hot skillet from 11 a.m. all the way to closing with beer and margarita deals all day long, says George Watson, owner. “We’ll have games, giveaways and prizes from 4 p.m. on.” Call 891-8600.

Tucked away from the Front Street action on Dickenson Street, Lahaina Coolers will be a cool and fun place to hang out for Cinco de Mayo on Sunday.

“We’ll have our regular seafood burritos, pork and fish tacos and quesadillas, too,” says owner Cruz Ortiz. “We will also feature our ‘besos caliente,’ or ‘hot kisses,’ made with peppers, shrimp and cheese wrapped in bacon and served with dipping sauces such as Ranch or bleu cheese.”

Lahaina Coolers is open daily from 8 a.m. all the way to midnight for breakfast, lunch, dinner and two happy hours. It will also uncork its popular wine tasting dinner Friday and present Mexican Monday as one of its regular promos.

5 Palms at Mauna Kai Resort in Kihei is the perfect spot to sip a beer as well as drink in the views from its perch on the north end of Keawakapu Beach. On Cinco de Mayo for happy hour from 3 to 9 p.m., select pupu are 50 percent off if you imbibe in a one-drink minimum.

“Mexican beer such as Corona in bottles will be discounted for our happy hour,” enthuses GM Moki Chong Kee. “We’ll also be pouring Golden Cadillac margaritas with Patron tequila, Grand Marnier and housemade mix available from 8 a.m. to 10 p.m. for Cinco de Mayo.”

Frida’s Mexican Beach House in Lahaina will also be jumping like refried beans in a hot skillet with flights of Patron from its own barrels hand-selected by Mark Ellman at the hacienda in Mexico along with fresh fish Zarendeado, ribeye mojo de ajo and views of the ocean, turtles, sailboats and the Neighbor Islands beyond.

“For Cinco de Mayo, we will be having a live mariachi band playing and singing in costume from 5 to 9 p.m.,” says Ellman, a famous chef with many trips to Mexico. “We will also braise Niihau lamb in chipotle and chile ancho for tacos, too.”

Named after the late Mexican self-portrait artist Frida Kahlo, it is situated oceanfront on Front Street next to its sister restaurant Honu Seafood & Pizza. Party favors will include Frida eyebrows on sticks, mustaches, mini sombreros and more. Frida’s pours more than 40 types of tequila and 11 Mexican beers. For more details, call Frida’s at 661-1287.