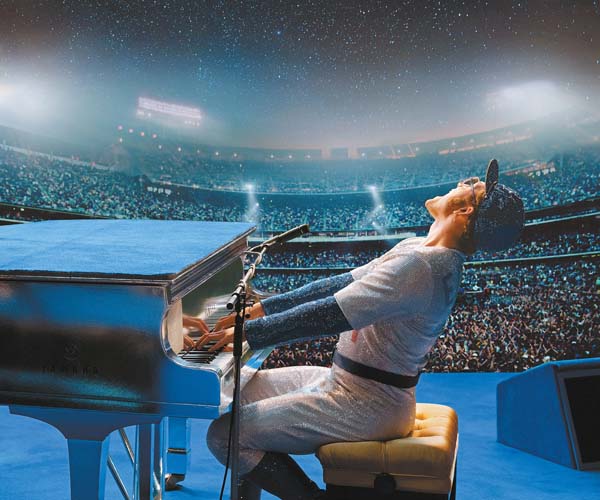 Whatever you say about Dexter Fletcher’s glossy, glittering Elton John blinged-out biopic “Rocketman ,” a shiny sequin of a movie, it doesn’t lack for sparkle. Like its flamboyant subject, it’s a movie outfitted to the nines in dazzle and verve, even if it’s gotten all dressed up with nowhere to go but the most conventional places.

And Elton, like Freddie, churned out unassailable, everlasting earworms sung round the world. Favoring melody over meaning, the uplifting music of both comes big-screen ready. Their songs were movies — in Technicolor. Just as “Bohemian Rhapsody” can glide over the origins of “Scaramouche,” we need no investigations into why that dancer was so tiny.

“Rocketman” deviates in its rating, R, its less hesitant depiction of its star’s homosexuality and, most dramatically, in casting John’s life across a fantastical musical tapestry. It’s also quite definitely a better movie –î although one still stuffed to the gills with cliches and heavily dependent on the sheer toe-tap-ability of its star’s extensive back catalog and its lead performer. 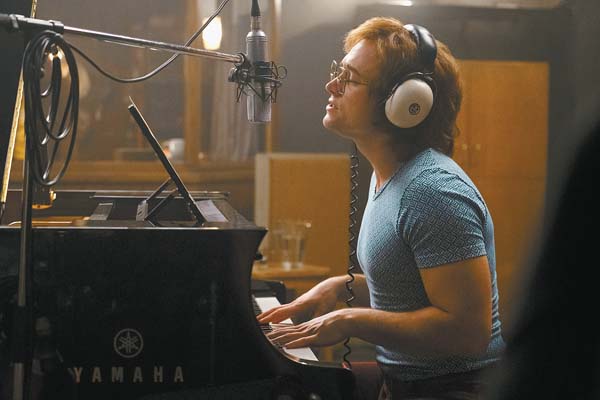 Here, that’s Taron Egerton, who doesn’t especially look like John or sound like John, but he gives a star-making performance built on charisma and will. Egerton gives it his all, and if there’s one quality that’s most essential in an Elton John movie, it’s spiritedness.

On the whole, this is a more-or-less true, authorized account (John is an executive producer), but one that frequently breaks free of stubborn things like chronology and gravity. In one scene, John –î whom rock critic Robert Christgau once referred to as a “one-man zeitgeist” –î himself rockets from an arena stage into the night sky and explodes as a firework. “Rocketman” has every fiber of its being committed to burnishing the legend of Sir Elton — literally an exploding star.

“Where there was darkness, there is now you, Elton John,” the devilish Reid tells him, shortly before John becomes an $87 million-a-year industry.

Working from a script by Lee Hall, Fletcher zooms through John’s life, finding trap doors in his past that fall into lavish song-and-dance routines. There’s some “Rocket Man” on a toy piano as a toddler and a “Saturday Night’s Alright for Fighting” at a carnival, for a reason that eluded me. The next song is rarely more than a few minutes away. Frequently, “Rocketman” feels like an ad for a jukebox Broadway musical. This is a movie yearning for the stage.

The film works in flashbacks, jumping off from an addiction group meeting. “My name is Elton Hercules John,” he introduces himself before giving a laundry list of addictions: alcohol, cocaine, shopping. The story shifts back, naturally, to John’s childhood (Elton was then Reginald Dwight), where his withholding parents, and one of the snottier fathers you’ve seen, unwittingly mold their son into a desperate performer and a bit of a clothes horse.

The expected moments of breakthrough and excess follow in John’s meteoric rise. The main thread throughout, at least theoretically, is his undying friendship with lyricist Bernie Taupin, a relationship that outlasts all others. There’s not as much of Jamie Bell’s Bernie as there should be, but if anyone takes up the slack, it’s Madden, who sexily menaces the screen in every scene he’s in.

All of John’s stage theatrics and feathered costumes, “Rocketman” suggests, are a way for John to hide from himself — from Reginald Dwight. But any demons that John might be haunted by are given only lip service.

Maybe Elton couldn’t cope with reality, but “Rocketman” certainly can’t. Instead, Fletcher’s movie is primarily one of metamorphosis, mythically drawn.

Performing “Crocodile Rock” at Los Angeles’ Troubadour, his feet — and the audiences’ –î achieve liftoff. “Rocketman” is happiest with its feet far off the ground in a dreamy pop splendor, with headlights all along the highway.