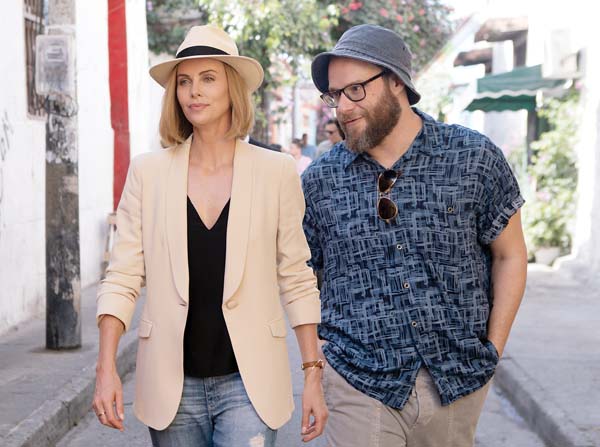 Charlize Theron and Seth Rogen make a sparkling comedic duo in the unconventional romantic comedy “Long Shot,” about a sleek politician and a schlubby journalist that is more than its superficial premise.

The film from director Jonathan Levine, which does its fair share of over-the-top gross-out humor and jarringly violent physical gags that in real life would have left Rogen’s character Fred Flarsky hospitalized or dead, is, even in spite of those overdone R-rated tropes, full of surprising heart, wit and insight about relationships, compromise and (gasp) even politics.

Rogen’s Fred is a suffer-no-fools politics reporter for a Brooklyn newspaper who is introduced trying to infiltrate a white nationalist group for a story. Spoiler, it’s not as successful as “BlacKkKlansman,” but it is funny. He’s idealistic but angry, with a permanent chip on his shoulder, against Republicans, people who make concessions, the wealthy and so on.

When he finds out that his paper is being purchased by the massive media conglomerate Wembley Media (a thinly veiled Fox stand-in with a Murdoch-like leader played by Andy Serkis), he quits on principle, rejecting even his boss’ offer to fire him so that, at the very least, he can collect unemployment. 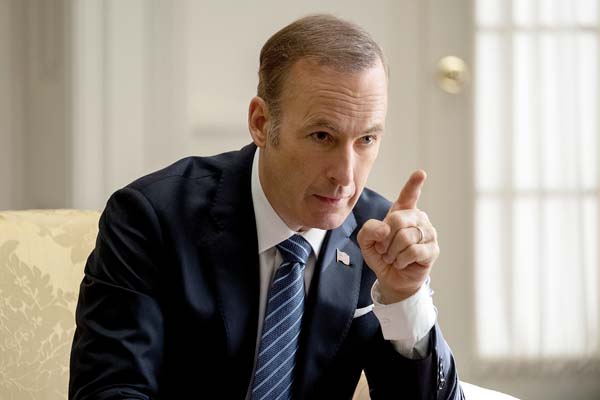 Bob Odenkirk in a scene from “Long Shot.” Lionsgate via AP

This puts him on a track to enter the orbit of Secretary of State Charlotte Field (Charlize Theron), a superstar who gets as much attention for her good looks as anything else, working under a popular but doltish President (Bob Odenkirk) who was best known for playing the President in a television drama for six seasons. Fred’s more successful friend Lance (an excellent O’Shea Jackson Jr. in yet another standout supporting comedic performance) convinces him to attend a fancy party with the promise of seeing Boyz II Men, and it’s there that he catches eyes with Charlotte.

The two knew each other from childhood. Charlotte used to babysit Fred, who was three years her junior and harbored a big crush on his more glamorous elder. Charlotte, who recently decided to consider a presidential bid of her own, is charmed by this blast from the past, a nostalgic respite from the glossy and surface existence she currently projects and a reminder of her dormant idealism.

So she hires him to punch-up her speeches with jokes that she hopes might improve her likability in the polls, upending his life as they travel around the world trying to get international leaders to sign on for her environmental initiative. They get close along the way, challenging and helping one another get out of their respective ideological ruts. He wants her to only do good. She wants him to understand that compromise and concessions are necessary in politics. Although this is an undeniably modern story, it is also a kind of homage to classic Hollywood romances, pitting two career-driven leads against each other.

Charlotte in particular is delightfully well-drawn, likely a testament to having both a male and female screenwriter involved, Dan Sterling (“The Interview”) and Liz Hannah (“The Post”). Her public persona is disarmingly polished, with always-perfect hair, makeup and clothes — expensive-looking but not ostentatious. But a peek behind the curtain reveals all the methods she employs to hide her imperfect humanness (like needing sleep, food and exercise). The film has a lot of fun playing with the ridiculous double standards of being a woman in politics, with a silly Fox News parody that’s often on in the background. And Theron herself gets to cut loose in a refreshing way, showing her brilliant comedic timing and aptitude for throwing a perfectly cutting barb.

It’s not a perfect film. It lags at times and, at over two hours, it is far too long, but Theron and Rogen have a natural chemistry that makes spending a couple hours with them, even in the dullish moments, a joy.

“Long Shot” is rated R by the Motion Picture Association of America for “strong sexual content, language throughout and some drug use.”