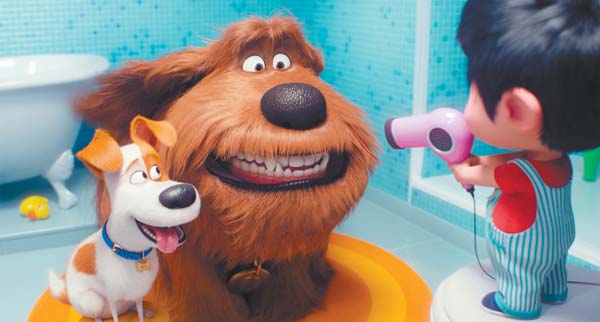 Max, voiced by Patton Oswalt (from left), Duke, voiced by Eric Stonestreet and Liam, voiced by Henry Lynch in a scene from “The Secret Life of Pets 2.” Illumination Entertainment/Universal Pictures via AP

Peter Rabbit and Mr. McGregor compete for the affections of a kind animal lover who lives next door. Starring James Corden, Domhnall Gleeson and Rose Byrne.

This beloved coming-of-age story about a resourceful young witch who uses her broom to create a delivery service. When Kiki lands in a seaside village, her unique skills make her an instant sensation. Featuring the voices of Kirsten Dunst, Janeane Garofalo, Phil Hartman and Debbie Reynolds.

Filmed at the Adelphi Theatre in London. This Tony Award-winning musical is based on true events and tells the story of Charlie, a factory owner, struggling to save his family business and Lola, a fabulous entertainer with an exciting idea. See Back Stage page 6 for more information about this showing.

The Metropolitan Opera presents a rebroadcast of Puccini’s “La Boheme,” from the 2013-14 season. Franco Zeffirelli’s picturesque staging, an audience favorite for more than 30 years, features a winning young cast, including soprano Kristine Opolais and tenor Vittorio Grigolo as the lovers Mimi and Rodolfo. Stefano Ranzani conducts.

The beloved classic is part of Studio Ghibli Fest 2019. When Satsuki and her sister Mei move with their father to a new home in the countryside, they discover that the house and nearby woods are full of strange and delightful creatures, including a forest spirit called Totoro, who can only be seen by children. Featuring the voices of Tim Daly, Lea Salonga and real-life sisters Dakota and Elle Fanning, in early roles.

Drac falls for an intriguing but dangerous woman while taking a luxury cruise with the rest of the pack. Starring Adam Sandler, Andy Samberg and Selena Gomez.