A yeti prompts a China travelogue in ‘Abominable’ 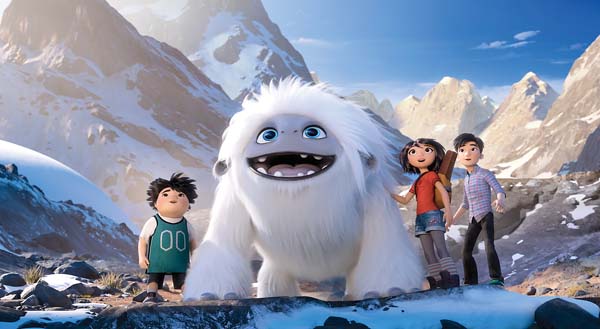 Characters (from left) Peng, voiced by Albert Tsai, Everest the Yeti, Yi, voiced by Chloe Bennet and Jin, voiced by Tenzing Norgay Trainor, are shown in a scene from “Abominable.” DreamWorks Animation LLC photo via AP

“Abominable” is just about the most cuddly piece of East-West synergy a corporation could dream up.

The first co-production between DreamWorks Animation and the Shanghai-based Pearl Studios (formerly known as Oriental DreamWorks), “Abominable” is a rare kind of creature, but the sort we’re likely to see more and more of in movie theaters. The Chinese box office will soon overtake the North America as the globe’s top movie market, inevitably reorienting big-screen entertainment.

There’s nothing wrong with aiming for moviegoers on each side of the globe. For Hollywood productions of a certain budget, it’s long been considered a necessity. And, of course, the intermingling of cultures — like in Lulu Wang’s lovely and heartfelt “The Farewell,” released earlier this year — often fuels brilliant, border-straddling tales.

But “Abominable,” about a girl who discovers a yeti on the rooftop of her Shanghai apartment building, is so safe, so risk-free, so bland, that its business imperatives are never just off-screen.

Writer-director Jill Culton (a writer on “Monsters, Inc.” and director of “Open Season”), who co-directed “Abominable” with Todd Wilderman, opens her film, like the Humphry Bogart thriller “Dark Passage,” with an escape shot from a first-person perspective. A young yeti — picture a giant, furry Maltese — gets loose from the wealthy collector of rare animals (Eddie Izzard).

Lured by a billboard for Mt. Everest, he hides himself on nearby rooftop. He’s soon found by Yi (Chloe Bennet), a “self-proclaimed loner” teenager living below with her mother (Michelle Wong) and her diminutive but fiery grandmother (Tsai Chin). Since losing her father, Yi has thrown herself into an assortment of unpleasant jobs, trying to save money to make the trip across China she and her dad talked about.

The familial scenes are warm but fleeting. Before long Yi, along with a couple of neighboring pals — Jin (Tenzing Norgay Trainor, whose grandfather Tenzing Norgay summited Everest with Edmund Hillary) and Peng (Albert Tsai) — take off with the yeti they nickname Everest, with pursuers close behind (including a red-haired zoologist voiced by Sarah Paulson), as they try to get their furry friend back to his home in the Himalayas.

A travelogue of China follows, with the gang briskly journeying between postcard inland destinations, from the Gobi Desert to Leshan Giant Buddha in Sichuan. The animation is bright and lively, with some enchanting set-pieces. Everest, they learn, is just a big puppy — like a cartoon cousin to DreamWorks’ dog-like dragon, Toothless.

He also has powers. With a low hum, Everest can spur gargantuan growth around him: a dandelion turns into an enormous floating ride, blueberries grow bigger than watermelons. The journey, too, takes on healing properties for Yi, whose beautiful violin playing — a hobby gleaned from her father — only adds to the uplifting quest.

Two stars out of four.