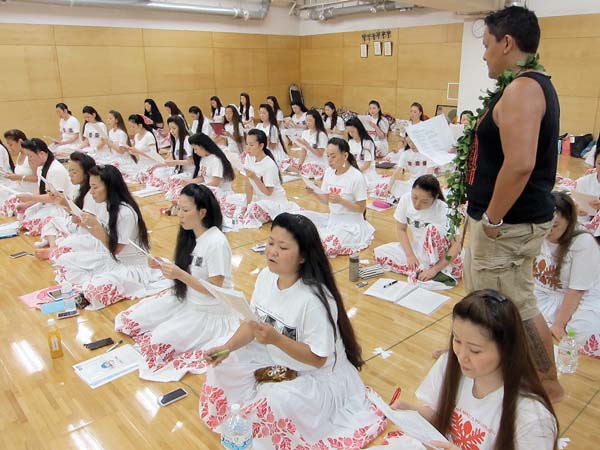 Kumu Hula Lopaka Igarta-DeVera leads Halau Na Mamo O Pu‘uanahulu in Japan. He is one of the kumu hula from Hawaii featured in filmmaker Lisette Flanary’s latest documentary, “Tokyo Hula.” It will premier at 7 pm. today at MACC. The director will be in attendance.

MMaui Arts & Cultural Center presents a return to Maui of Hawai’i International Film Festival. There will be three films and an evening showing of eight short films in MACC’s McCoy Studio Theater starting today and concluding Saturday. Tickets are on sale at the MACC Box Office.

Maui selections represent some of the best from filmmakers throughout the Asia-Pacific region.

Filled with insight and discovery, HIFF is dedicated to advancing understanding and cultural exchange among the peoples of Asia, the Pacific and North America by presenting films from around the world. Each year, more than 50,000 attendees throughout Hawai’i experience the sounds and images of filmmaking from approximately 45 countries. This cultural exchange of ideas, presented through the powerful medium of film, raises the awareness of our similarities and differences alike.

Films to be presented on Maui are all from Hawaii, plus one feature from New Zealand:

“Tokyo Hula,” directed by Lisette Flanary, focuses on the growing hula industry in Japan. Today, it is estimated there are nearly two million people dancing hula in Japan — a figure greater than the entire population of Hawaii. With more people dancing hula in Japan than in Hawaii where the native art was born, this explosive growth has created a multimillion-dollar industry based on culture as commodity. What motivates Japanese students and teachers to dance hula and how is it translated into a foreign culture? How do native Hawaiians participate in this cross-cultural exchange? Flanary will attend the Maui screening.

The film runs 81 minutes. It will be preceded by the short film, “Voices of the Forest,” directed by Bradley Tangonan, which tells the story of Kumu Kaui Kanaka’ole who leads her halau into the forest to prepare for a sunrise hula for a sacred hill called Ka’uiki.

This evening program will include eight made in Hawai’i short films:

• “Down On the Sidewalk in Waikiki” / Director: Justyn Ah Chong.

“Mo Te Iwi: Carving for the People,” directed by Robin Greenberg, is an intimate journey into the life and work of Maori master carver Rangi Hetet. At 82, Hetet is one of the last traditional Maori carvers alive today who learned their craft in an era that straddled the ways of the old tohunga whakairo (master carvers) and those of the modern world. “Carving does not exist alone as a skill-it exists within a body of knowledge and that knowledge exists and is held by a whole community of people.”

“Haole,” from director James Sereno, is about 13-year-old David Kealoha, who dreams of escaping rural Hawaii, but when Jonah Morris, a white kid from Phoenix moves into the neighborhood, a series of events irrevocably change the trajectory of David’s life and those closest to him.

“Haole” will be preceded by the short film, “Crossing the Line,” directed by David Rosen, about a jury that has to decide, in the process of deliberations in coming to a verdict, what happened as they come to terms with their own prejudices about sexual assault.

Film titles and show times subject to change. For more details on HIFF and this year’s films go to hiff.org.