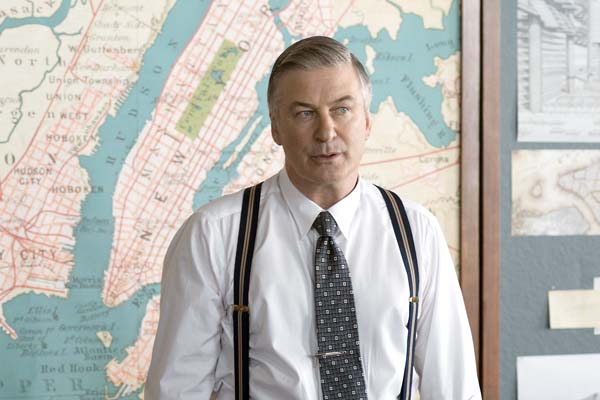 Jonathan Lethem’s novel about a private eye with Tourette’s syndrome, “Motherless Brooklyn,” starts with a brilliant burst of uncontrolled profanity and an explanation of its protagonist’s condition.

“Words rush out of the cornucopia of my brain to course over the surface of the world, tickling reality like fingers on piano keys. Caressing, nudging. They’re an invisible army on a peacekeeping mission, a peaceable horde. They mean no harm.”

Lethem lets loose a riot of language across the subsequent pages, remaking a classic detective story with an uncontrollable flow of words. In his intelligent, engrossing and derivative adaptation of “Motherless Brooklyn,” Edward Norton has something tidier in mind.

Norton, who wrote, directed, produced and stars in the film, has shifted the story from the ’90s to the ’50s, taking a then-contemporary twist on an old genre and sending it back to its late-noir heyday, along with all the period-appropriate trench coats, automobiles and venetian blinds. Norton first sought out the book more than 20 years ago — this is a longtime “passion project” finally come to fruition — and it’s clear that he wanted to enlarge the story’s ambitions. He’s after a “Chinatown” for New York. 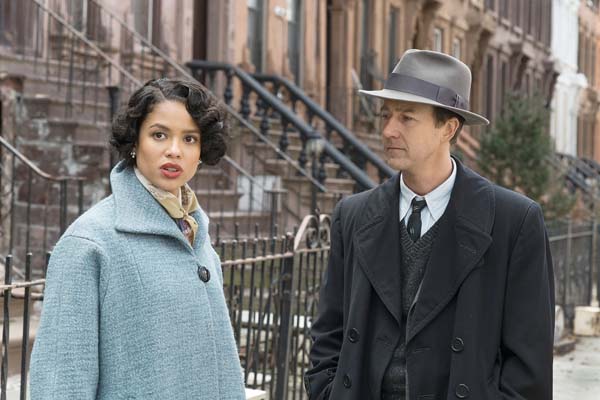 Lionel Essrog (Norton) is private dick whose mentor Frank Minna (Bruce Willis, whose infrequent appearance in movies of late has only heightened his powerful presence) adopted Lionel and raised him in his private investigator business. When Minna is killed in the film’s opening scenes, Essrog throws himself into discovering the murderers, whipping up his fellow detectives — Tony (Bobby Cannavale), Gilbert (Ethan Suplee) and Danny (Dallas Roberts) — to join in the search.

Essrog, at times donning the guise of a reporter, follows a trail of clues that leads him across the metropolis and into a broad city- hall conspiracy that rises to the penthouse-heights of New York power. Along the way are trips through a not-yet-razed Penn Station, a handsome Washington Square Park and a pivotal Harlem jazz club (where Michael K. Williams plays a trumpet player). He befriends a black attorney, Laura Ross (Gugu Mbatha-Raw), who helps him realize the full scope of the corruption revolving around “slum clearance” policies of redevelopment, and how Minna figures into it.

The Robert Moses doppelganger here is named Moses Randolph and played with perfection by Alec Baldwin, who’s making something of a habit of playing New York’s real-estate villains. In one fine moment with a large map of New York behind him, he insists that he’s not above the law, “I’m ahead of it.”

To some, this well-known history (there is also a Jane Jacobs-like figure protesting Randolph’s brute-force policies) is too familiar to be particularly intriguing. It’s a little like a gumshoe wandering into a text book. But not everyone is deeply versed in Moses’ overwhelming imprint on New York City. And what makes “Motherless Brooklyn” respectable and even novel is this grafting of social history onto a genre tale. It’s not exactly commonplace in today’s movies to be taken down a rabbit hole about urban development. It’s a laudable impulse, and Norton’s film provides a welcome reminder of what we’ve been missing.

There’s certainly more to be gained from that side of “Motherless Brooklyn” than the showcase of Norton’s performance. The actor, who famously played a stuttering schizophrenic in “Primal Fear,” largely pulls it off with a full diet of tics, mannerisms, jerks and blurts. “It makes me say funny things, but I’m not trying to be funny,” Essrog, nicknamed “Freakshow,” tells someone. But the performance never feels like much more than an acting challenge.

Norton, who last directed the 2000 romantic comedy “Keeping the Faith,” has made a resolutely sturdy movie, filled with excellent actors (Willem Dafoe is also in the mix). Dick Pope (“Mr. Turner”) supplies the slick and shadowy cinematography — with a vivid feel for New York. “Motherless Brooklyn” is done well enough that you wish it had struck out on its own path, rather than crib from Robert Towne and Roman Polanski. It’s hard to forget it, but that’s “Chinatown.”

“Motherless Brooklyn,” a Warner Bros. release, is rated R by the Motion Picture Association of America for language throughout including some sexual references, brief drug use, and violence. Running time: 144 minutes. Two and a half stars out of four.

Dench is the special effect in ‘Cats’