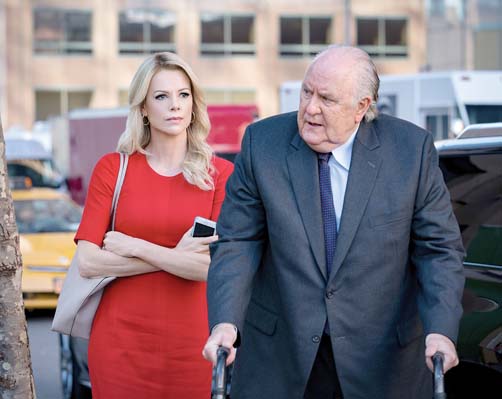 Charlize Theron (left) and John Lithgow are shown in a scene from “Bombshell.” Hilary B. Gayle/Lionsgate photos via AP

It’s probably a testament to the makeup artists of Jay Roach’s Fox News docudrama “Bombshell” that the movie opens with a disclaimer announcing that the people depicted within are played by actors. Films don’t ordinarily require a heads up that that’s, you know, Charlize Theron.

But “Bombshell” is a savvy and flashy kind of docudrama that trades equally on recent headlines as it does the star power of its cast. Roach has a light hand with topical political stories (“Recount,” “Game Change”), as does screenwriter Charles Randolph, who co-wrote “The Big Short.” In “Bombshell,” they combine their breezy style with a powerhouse cast for a colorful TV-styled dramatization that — despite the disclaimer — verges more on caricature than verisimilitude.

“Bombshell” depicts the corporate culture of sexual harassment at Fox News through the perspectives of three women: star anchor Megyn Kelly (a husky-voiced Theron, almost unrecognizable), “Fox & Friends” star Gretchen Carlson (Nicole Kidman) and a fictional composite associate producer named Katya Pospisil (Margot Robbie). This is the story behind the toppling of Roger Ailes (played by John Lithgow, in a fat suit), who after events kicked off by Carlson’s 2016 sexual harassment lawsuit against him, was eventually ousted from the network he had long ruled as a powerful media fiefdom and, as it turned out, a personal harem.

The fallout at Fox News came before Harvey Weinstein’s downfall but it also, as a #MeToo drama, had a sensational backdrop. Fox News was never anyone’s idea of a natural battleground on women’s rights. And “Bombshell” delights in going inside Fox News’ Manhattan studios (it opens with a travelogue of the various floors of its Sixth Avenue headquarters) and teasing out how this reckoning reverberated within what many in Hollywood would consider the belly of the beast. 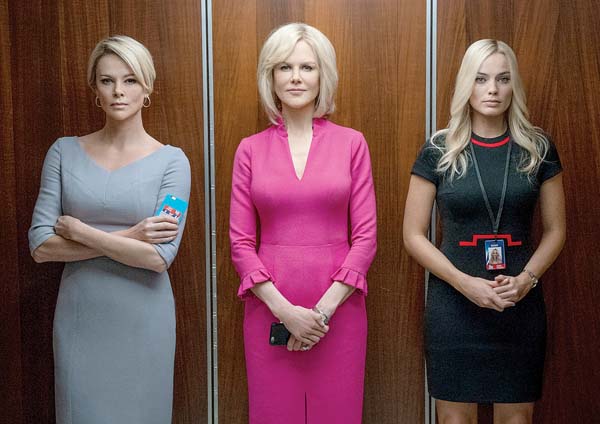 Charlize Theron (from left) Nicole Kidman and Margot Robbie are shown in a scene from “Bombshell.”

Roach’s camera snakes through those offices, capturing how the predatory climate filtered down through the newsroom’s power structure. As a workplace drama, it’s quite successful. We get a sense of whispers and rumors and careless misogyny everywhere. Glass tables are used on sets so that the legs of female correspondents can be seen. Carlson draws Ailes’ ire for hosting a show without makeup on National Girls Day. When the hopeful Katya, aspiring to become an on-air talent, goes into Ailes’ office to meet him and is soon told to hike up her dress, we arrive at the ugly source of the toxicity.

Each of the three women bear the burden of abuse in various ways, largely unaware that others share in their predicament. And they, or at least the veteran TV personalities, are accustomed to being played against each other in competition for time slots and ratings. The best thing about “Bombshell” is how it captures just how difficult it is for each to come forward. At a network like Fox News, it means a kind of rejection of its entire culture. It means damaging one’s own career. It means going against what they, themselves, have often stood for.

That makes their story heroic but complicated. “Bombshell” is better at the hero part than the complications. Roach isn’t quite invested in reconciling what it means to have a protagonist like Kelly who, among other things, was last year fired from NBC for defending blackface. “Bombshell” makes some gestures to Kelly’s complicity, but it mostly focuses on the unknowing solidarity between these three women.

Some might quibble that Carlson, who acted first, deserved center stage. But this is Kelly’s movie and the drama for her has greater meaning. She’s drawn into a fight she didn’t ask for when Donald Trump, then a presidential candidate, attacked her debate moderating, saying “there was blood coming out of her eyes, blood coming out of her wherever.”

I would argue that Theron was better in another pointedly political movie from this year, the romantic comedy “Long Shot,” in which she played a presidential candidate who falls for her less polished speechwriter (Seth Rogen). As famed as Theron has become for her extensive transformations, her considerable power, for me, comes through best in less adorned performances like in that film, “Tully” or “Mad Max: Fury Road.”

The question, ultimately, is whether “Bombshell” ought to have spun quite so snappy a movie out of such a story. It does cartwheels to make a vile tale compelling, and it can feel like a parade of starry impressions rather than something genuine. (Best of the bunch is Alanna Ubach’s Jeanine Pirro.) But to quote Ailes in the film, “It’s a visual medium.”

“Bombshell,” a Lionsgate release, is rated R by the Motion Picture Association of America for sexual material and language throughout. Running time: 108 minutes. Two and a half stars out of four.