Songs of the mountains 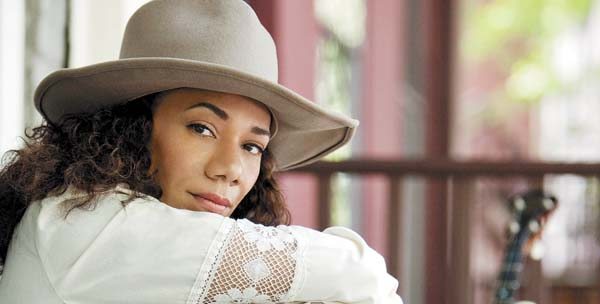 Hailed as “a charismatic neo-soul diva” by New York’s Time Out magazine, after releasing two acclaimed soul/funk albums, Martha Redbone made a stylistic transition for her follow-up, “The Garden Of Love: Songs of William Blake,” where she fused the poetry of the 18th-century British visionary artist with Appalachian mountain music.

“I’m originally from Harlan County, Kentucky,” she explains. “Most of my childhood was in the hills, so we thought we could make a tribute and honor our family. I’m the fourth generation who has grown up on this music. My husband, Aaron Whitby, is English and he said maybe we could set some Blake poems to music. They spoke to me of the mountains and my journey and the language my great-grandmother would use in church.”

Proclaimed as one of greatest artists Britain has ever produced, Blake called many of his poems “songs,” and over the years, composers have set them to music. Blake’s poem “Jerusalem” was adapted into a staple hymn of Anglican churches, and his influence on contemporary musicians includes Bob Dylan, Van Morrison, U2 and Jim Morrison.

The New Yorker praised “The Garden of Love” as “a brilliant collision of cultures,” where “the mystical, humanistic words of the 18th-century English poet are fused with the melodies, drones and rhythms of the Appalachian string-band music that Redbone absorbed as a child.” And legendary rock critic Robert Christgau proclaimed, “She’s created a new body of folk song by a lyricist who compares favorably to, well, Bob Dylan.”

Helping her shape the music was John McEuen, a founding member of the Nitty Gritty Dirt Band, who wrote the arrangements and played more than a half-dozen instruments. McEuen assembled a team of studio veterans that included Byron House (of Robert Plant’s Band of Joy) on upright bass and guitarist Mark Casstevens (Garth Brooks, Alabama, Johnny Cash).

“John really loved the idea and the poetry and our demos,” Redbone says.

Growing up in Kentucky, Redbone was raised by her Native American grandparents.

“In Harlan County, there was one radio station and they played everything,” she recalls. “By the time I moved to Brooklyn in 6th grade I was probably the only person there who had ever heard of Conway Twitty and Dolly Parton.”

Debuting in 2000 with the deliciously funky “Home of the Brave,” Redbone attracted critical attention. AllMusic noted: “If there were any justice in the music business, this emotional powerhouse of a retro-soul singer/songwriter would be up there on the charts with the Macy Grays and Sheryl Crows.” She followed with the equally memorable “Skintalk,” which was described by Native Peoples Magazine as the soulful sound of “Earth, Wind and Fire on the Rez.”

“We came onto the scene as a lot of the big companies were imploding and it became harder to be heard on a mass scale,” she suggests. “And you have to follow the sound of what the going trend is, and everyone sounds the same. But I’m a real artist.”

After releasing “The Garden of Love,” Redbone received a commission “to dig deeper and share my family’s story. People aren’t really familiar with coal mining from a person of color’s perspective, Native and African American, and I’m both. It’s my original Cherokee homeland. We thought it would make an interesting story.”

Redbone’s “Bone Hill: The Concert” is staged as a dramatic musical work with a cast of actors/musicians. The story is driven by songs that span a broad expanse of American music from traditional Cherokee chants and lullabies to bluegrass, blues, country, gospel, jazz, rock, R&B and funk.

* “Bone Hill: The Concert” will be presented tonight at 7:30 in the Maui Arts & Cultural Center’s Castle Theater in Kahului. Tickets are $35 (plus applicable fees) and are available at the box office, by calling 242-7469 or online at www.mauiarts.org.

Releasing their first album together in 1995, “T.J. Kirk,” where they interpreted songs by Thelonious Monk, James Brown and Rahsaan Roland Kirk, Hunter and Amendola have recorded a number of albums and toured extensively.

An amazing guitarist, Hunter plays custom-made seven- and eight-string guitars, on which he simultaneously plays bass lines, rhythm guitar and solos. AllMusic described Hunter’s guitar technique as “mind-boggling . . . he’s an agile improviser with an ear for great tone, and always has excellent players alongside him in order to make great music.”

And Jazz Times noted: “Hunter happens to be a remarkably deep musician who is devoted to the tradition of his instrument in all of its applications: blues, folk, rock, reggae, country and jazz.”

Picking up his first guitar when he was 12 for $7, Hunter a few years later took lessons from Joe Satriani. Among his primary influences were jazz great Joe Pass and Tuck Andress (of Tuck & Patti).

Hunter hooked up with poet/rapper Michael Franti as a duo, and then with the Disposable Heroes of Hiphoprisy band, which opened stadium gigs for U2.

Since emerging in the ’90s with a string of successful recordings on the Blue Note label, Hunter has performed in a wide variety of settings — duos, trios, quartets, quintet and sextet.

Among his own albums he interpreted Bob Marley’s “Natty Dread” in its entirety, and in 2014 released “Dionne Dionne,” working with former Arrested Development vocalist/guitarist Dionne Farris on a series of songs associated with Dionne Warwick. His recent recording credits include playing on albums by Frank Ocean, John Mayer, Nora Jones and Snarky Puppy.

As a sideman, drummer Amendola has performed and recorded with an impressive array of artists including Bill Frisell, John Zorn, Madeleine Peyroux, Joan Osborne, and Rodney Crowell. “Amendola has complete mastery of every piece of his drum set and the ability to create a plethora of sounds using sticks, brushes, mallets and even his hands,” noted Modern Drummer magazine.

Reviewing one of the duo’s shows in London, the U.K. Guardian praised: “Hunter’s virtuosity was bolstered by the deftly attentive San Francisco drummer Scott Amendola. It was tour de force of a dazzling performance.”

* The show will begin at 8 p.m. Monday. DJs Joralien and Boomshot will open and close the night. Advance tickets range from $15 to $25 and are available through www.eventbrite.com.

Eric Gilliom and his band will host a “Rockin’ Halloween Party” at Casanova Italian Restaurant in Makawao at 10 p.m. Saturday, playing songs from “The Rocky Horror Picture Show.” Admission is $20.

Also at Casanova, fado singer Ramana Vieira will perform at 3 p.m. Sunday. Vieira has been described by Mundo Portugues newspaper as the “new voice of Portuguese world music,” and The Boston Globe praised her as “one of the pioneers of a unique hybrid of fados with a contemporary 21st-century spin.”

“It is similar to the blues,” Vieira explains. “I call it the cathartic music of the Portuguese.”

* Admission is $10. For more more information, visit the web at www.casanovamaui.com.

“Halloween in Lahaina” returns to Front Street on Monday.

Highlights include the 38th annual Keiki Halloween Costume Parade at 4:30 p.m. The Banyan Tree Park will feature dance music with DJ Serna, and Campbell Park will host DJ Zinn and ShakeTown. Also in Lahaina, Fleetwood’s on Front St. will hold a “Curious Cat” party with two DJs for $20.

* Front Street will be closed to vehicular traffic from 3:30 to midnight.

A Halloween-themed “Spell Bound” evening on Friday at Kono’s on the Green in Kihei will help raise funds for the Maui AIDS Foundation. It will feature dance music with DJ Playwfire Ono and special guest DJ LaRage, aka Tiare, from Las Vegas.

Prizes for a costume contest include VIP tickets to Mardi Gras Maui at the Four Seasons Resort Maui next year, and gift cards for electrolysis, beauty, massage and wellness treatments.