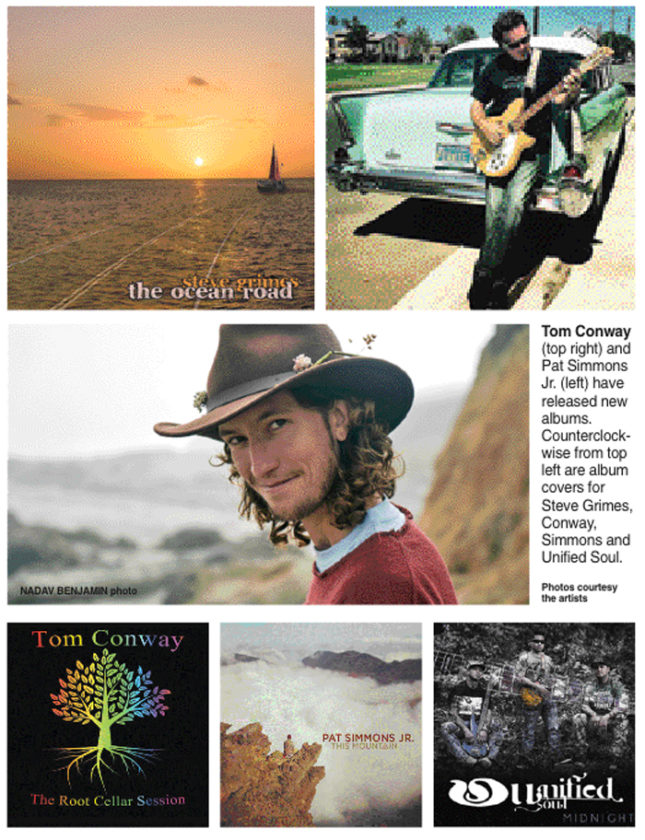 Pat Simmons Jr. has been around music all his life. Ever since he can remember, he spent time on the road touring with his musician dad, Pat Simmons Sr., of the Doobie Brothers.

“My mom says I took my first steps on a tour bus,” he says. “It really brought me close to a lot of traditional music, blues and roots and rock ‘n’ roll. And I really appreciate country and Hawaiian music.”

So it’s no surprise that Pat Jr. would eventually start writing and releasing his own music. And with dad producing the debut album, he’s fortunate to be able to call on some stellar backing by an amazing ensemble — from Maui’s Keali’i Reichel, Willie K and Tom Conway, to blues rocker Elvin Bishop, Doobie’s guitarist John McFee, Little Feat keyboardist Bill Payne, Bonnie Raitt bassist Hutch Hutchinson and of course his father.

“My dad really made it happen,” says Pat, who has lived on Maui since the age of 6. “He guided me all the way. It was really special to have his support because he has so much experience.”

“This Mountain” features six sparkling songs that encompass his love for Maui and respect and appreciation for the culture, our natural wonder and a general gratitude for life.

“That was a major blessing,” says Pat. “Keali’i really loved the song. It really touched him and he said he would love to sing on it.”

One of the album’s most sonically beguiling tracks, “Rust,” which is buoyed by McFee’s evocative dobro playing, contrasts Pat’s love for surfing with a concern about environmental degradation.

“I had picked up a copy of Surfer magazine, and the cover was about oceans being under siege,” he explains. “I started understanding our oceans are becoming acidified and the reefs are literally rusting, they’re dissolving. ‘Rust’ is about the reef. I surf most mornings at Ho’okipa and the lyrics talk about what a gift it is that I can go out there.”

On “How Many Years,” Pat addresses the arduous journey when he faced and survived cancer in 2013.

“Coming out of the cancer experience about a year ago, I was sitting on the porch with my grandmother, who just passed away, and I realized I don’t know how many years I’m going to have in this body. I realize how blessed I was to come through the experience I had and that every day is a blessing,” he said.

From there he ups the mood with the more rocking “Touch the Ground” (ably driven by Willie K and Conway’s combined guitars) where he offers sage advice to keep our spirits up. “Any time I get thrown off balance getting my feet on the ground, returning to nature, brings me back to balance,” he affirms.

Pat’s love for caring for the earth led him to graduate with an ecology degree from The Evergreen State College in Olympia, Wash. Back on Maui he spends time growing food organically.

Over the years, he’s taken up playing a number of instruments including guitar, ukulele, didgeridoo, percussion and flutes. On the road with his dad, he’s opened for the Doobie Brothers, while his Maui gigs have included opening for singer-songwriter Trevor Hall.

“The local life I’m living here is an example of aloha aina, how I can love my home and take care of my island,” he says. “Maybe it will get people to care about their home too.”

On past CDs, this Na Hoku-nominated artist called on friends like guitarists Larry Coryell and Pat Simmons Sr., and harmonica virtuoso Norton Buffalo to help out. This time around, he’s brought in two island heavyweights – Keola Beamer and Jake Shimabukuro.

With the ocean playing a significant role on Grimes’ CD, water symbolism is quite prevalent whether he’s singing about “the maiden of the rain” on “Rose of Ballyroe,” “just ride with the tide” on “It’s All Good” or “life changes like the weather and storms” on the closing “Forever Endeavor.”

A very engaging, generally mellow collection of tunes, two are aimed at kids – “Where in the World Are the Whales” and “Malama Your Mama” – both highlighted by a chorus of 12- and 13-year-old voices.

“I used to teach music in the school system in Washington state,” Grimes explains. “One day they wanted a song about whales. My wife is a crew member of Hokule’a and teaches at a school in Lahaina. I tried the song out on the kids there and they loved it. I thought a group of kids singing on it would be good.”

“Jake loved the song, and he gave me so much to work with, I was like a kid in a candy store,” says Grimes. “He’s such an amazing artist.”

Recalling his youth, Grimes spins a nostalgic ’60s tale on “Twenty,” recalling the time of the Woodstock music festival, protest marches, and “peace and love.”

“I did the marches on Washington and was at Woodstock,” he recalls.

Grammy winner Eric Helmkamp is on board as co-producer and engineer, and Maui musicians assisting include drummers Kerry Sofaly and Paul Marchetti, bassist Danny M, and chanter Wilmont Kahai’ali’i.

In April, Grimes will release another CD, “Assorted Chocolates,” which he says is “totally different from ‘Ocean Road’ in terms of style.” He will hold a CD release party for that recording April 14 at the King Kamehameha Golf Club in Waikapu.

An exceptional guitarist, Tom Conway has toured on the Mainland in recent years with Willie Nelson, even appearing on “Jimmy Kimmel Live!” with the country icon. And when Willie K hits the road, he brings Conway along. A former member of Gypsy Pacific and an ardent fan of Django Reinhardt’s gypsy jazz style, this Maui musician has returned to his rock roots on his most recent albums.

The project began when a friend invited him to record a few songs at his Kula studio.

“In three hours, I had 19 tunes,” says Conway. “We kept it raw, as I wanted to get the tunes down in a singer-songwriter format. I do a lot of solo gigs, and people ask, ‘Do you have any CDs of the stuff you’re playing?’ Before, I’d have to hand them a gypsy jazz CD.”

With a vocal style reminiscent of the Dead’s Bob Weir on tracks like “Red Flag,” Conway and his acoustic guitar playing can shine on songs that reflect bluesy rock influences thanks to the unplugged format. Raw blues surfaces on tracks like “Union Station” and “12 Bar Blues.” The jazzy swing of “Skeleton in the Closet” could grace a Dan Hicks recording. He heads to the bayou for “Swamp Dog Boogie,” where he flexes his slide guitar skills, and the funky “Mercury Retrograde” humorously depicts disturbing planetary shifts.

“I did it without any lyric sheets or chord charts,” he says. “It was all memorized. Some of the songs I’d like to record later with drums and bass as a rock thing.”

Conway plays solo at the Monkeypod Kitchen in Wailea from 4 to 6 p.m. Mondays and Fridays, the South Shore Tiki Lounge in Kihei from 4 to 6 p.m. Saturdays and Charley’s Restaurant and Saloon in Paia from 6:30 to 8:30 p.m. every other Tuesday. He also plays with Willie K and the Warehouse Blues Band on Thursdays at the King Kamehameha Golf Club.

You can’t go wrong releasing a reggae album in the islands, and Maui’s Unified Soul members have cooked up a winning formula on their “After Midnight” EP, mixing lovers rock-style romantic ballads (“Midnight”) with more uptempo, soulful grooves on tracks like “Reggae Party” and the dubbed-out “Soulful Eyes.”

Citing The Green, Ooklah the Moc, Rebelution and SOJA as influences, Unified Soul’s infectious sound will delight fans of island reggae. Standouts include the catchy “Life is Music,” which will likely pack dance floors and make playlists on radio stations across the state.