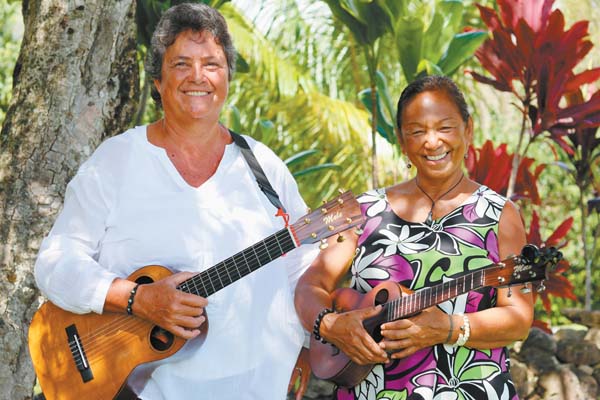 Lei‘ohu Ryder (left) and partner Maydeen ‘Iao have released a new collection of songs inspired by their journeys and experiences performing around the world. “Mama’s Land” and an acoustic version of a prior album, “Lady of the Mountain, Unplugged First Take,” are available in CD format or for download at www.leiohuryder.com, www.cdbaby.com and soon at Apple Music and Amazon Music. Photo courtesy the artist

Lei’ohu Ryder’s latest album, “Mama’s Land,” finds this acclaimed Maui musician collaborating with her partner, Maydeen ‘Iao, on an impressive collection of songs inspired by their journeys and experiences performing around the world.

Once describing her music as “contemporary Hawaiian from a very ancient source,” she is known for crafting soothing songs that maintain a living connection to the sacred essence of Hawaii’s land and people.

The meditative quality of “Mama’s Land” would make it particularly beneficial for spas and healing retreats, and for those seeking a relaxing tonic.

Lapping waves introduce the opening, “Aloha E Ke Kai Moana,” which pays tribute to the cleansing power of the ocean. Inspired by a journey to India, the mantra-like “Be Love” encourages introspection with the breath of aloha, while “Eo Wahi Pana La” reminds that every living thing is sacred.

” ‘Mama’s Land’ is our mother earth, and it’s inspired by our travels,” explains Lei’ohu. “It’s a very meditative CD. These mele are honoring the beauty of her body, and we’re just sharing our gratitude for being able to live on our mother, ‘mama’s land,’ especially at a time when there’s so much change, and at the same time there’s so much good. We can choose where we focus — is it fear or is it aloha.”

Singing in Hawaiian and English on the album, she describes this music as, “Hawaiian with a global perspective. The music evokes an intention of healing and love.”

Enhancing songs with her expressive guitar playing, she is joined by Maydeen on ukulele and vocals, Arlie-Avery Asiu on bass (whose fans include Willie K and Pat Simmons) and brilliant cellist Shannon Lee Hayden, who performs with Simrit Kaur. The addition of cello adds a potent dimension to these original compositions, some of which extend for eight and nine minutes.

“When the four of us got together, it was beautiful — like family,” she says.

The cover of “Mama’s Land” is an aerial shot of the Kukuipuka Heiau overlooking the ocean in Waihee. Inside the rock walls, you can just make out the tiny figures of the two musicians lying down facing the sky.

Back in the mid-1990s, Lei’ohu first encountered the remains of an ancient heiau known in the old days as a place of refuge sacred to Kuka’ilimoku. The discovery of the overgrown site inspired her to work to restore Kukuipuka and release her debut CD, which was dedicated to the heiau and other sacred sites on Maui.

Here we have the artist unadorned, simply playing guitar and singing beautifully on 13 Hawaiian songs.

Writing in the liner notes, producers Jake and Laurie Rohrer point out: “Lei’ohu memorialized these songs as you hear them, one after the other, none requiring repair or a second take. An informal session, Lei’s intention was to simply capture the songs that were coming to her in such rapid succession she feared some may become lost and forgotten. None of her many recordings better exemplify the angelic quality of her voice.”

“I hadn’t listened to it unplugged for about 20 years, and I was blown away by the spirit of it,” says Lei’ohu. “They were all one take. It’s pure innocence. You can feel my spirit. Sitting with me during the whole session was (revered Hawaiian elder) Auntie Mahilani Poepoe. She was like my spiritual mother, and she sat there and closed her eyes like she was in a whole other dimension as I was singing. Later on, she shared a lot of wisdom. She touched our hearts. I can remember the words that she shared and many things have come to pass as a result of her sharing her vision.”

v Lei’ohu will appear at the Ram Dass/Krishna Das & Friends “Open Your Heart in Paradise” retreat Nov. 28 through Dec. 3 at the Napili Kai Beach Resort. For more information, visit www.ramdass.org.

She will also perform at the Winter Solstice Gathering on Dec. 21 from 10 to 11:30 a.m. at the Kukuipuka Heiau, which is a fundraiser for the heiau. A $30 cash donation is suggested, but no one will be turned away. For tickets and information, visit www.eventbrite.com.

“Celebration and happiness are underlying themes of who we are, and what we want our music to be,” Dirty Heads’ lead singer Jared Watson told Grammy.com. “You realize after you’ve been doing this for 15 years that you can affect people with your music, and you can affect them in a positive way. I think since day one, we’ve been trying to make feel-good music and just fun music.”

Known for their popular, chilled reggae/rock/hip-hop sound, this Huntington Beach, California-based band was inspired by fellow Southern California groups like Sublime, No Doubt and Slightly Stoopid.

Formed in 2006 by high school friends Watson and Bushnell, they began composing hip-hop songs with reggae and punk influences. Their name came from older brothers calling them “dirty heads” when they were younger.

A version of their debut release, “Any Port in a Storm,” featured the hit single “Lay Me Down,” which sold gold and peaked at No. 1 on the Billboard Alternative Songs chart. The album was also distinguished by the keyboard work of the late Billy Preston. Famous for playing with the Beatles, including the “Let It Be” sessions, Preston’s contribution to a few tracks on “Any Port in a Storm” marked his final studio performance.

“It was amazing,” recalled Bushnell in an Orange County Register interview about working with Preston. “It was one of those things where our management came to us and said that Billy was down to play some songs with us, and they were going to fly us to his place in Arizona. I was like, ‘Are you kidding me?’ “

Their follow-up album, the easy going “Cabin By the Sea” featured guest vocalists Kymani Marley (in a tribute to his father), Rome Ramirez from Sublime and reggae star Matisyahu. A Pier magazine review noted: “Dirty Heads have been on a mission to spread their unique feel-good inspiration, combining the brighter side of music from all spectrums in Southern California. ‘Cabin By the Sea’ displays the Dirty Heads eclectic style, meshing their soulful acoustic vibe with their hip-hop rhymes over reggae rhythms.”

They later recorded an acoustic version of the title track, which inspired an entire acoustic album in 2013 called, “Home: Phantoms of Summer.”

“We started as an acoustic act, so we wanted to get back to our roots,” Watson told Billboard. “We wanted to really dive into our lyrics and melodies.”

With their fourth studio album, “Sound of Change,” Dirty Heads took a creative evolution that saw them edge close to Coldplay-style pop territory. With tunes ranging from funky rap tracks to club bangers, they were joined by guests B-Real of Cypress Hill on “Franco Eyed,” and rapper Tech N9ne on “Burn Slow,” with Grammy Award-winning producer Supa Dups at the helm.

In 2015, Dirty Heads appeared on Blues Traveler’s album “Blow Up the Moon,’ co-writing the songs “Castaway” and “Vagabond Blues” with Ramirez.

Last year, they released “Swim Team,” which featured The Unlikely Candidates on “Celebrate” and 311’s Nick Hexum on “So Glad You Made It.”

“One of the few front runners of the reggae scene, Dirty Heads have always found a way to incorporate hip-hop, alternative and ska into their music,” praised the Rocky Mountain Collegian. “The band has gained a massive following because they have been fusing together aspects from several genres since the release of their debut.”

* Dirty Heads performs at 7 p.m. Saturday in the Maui Arts & Cultural Center’s Yokouchi Pavilion & Courtyard. Gates open at 6 p.m. General admission tickets $25, $35 and VIP tickets are $55 (plus applicable fees). Prices increase day of show. VIP tickets include side stage access, tables and chairs and private bar for beer and wine purchases. Patrons must be 21 and older with a valid ID to purchase a ticket and enter the VIP section.

For tickets and information, go to the box office, call 242-7469 or visit www.mauiarts.org.