‘Living life in the present moment’ 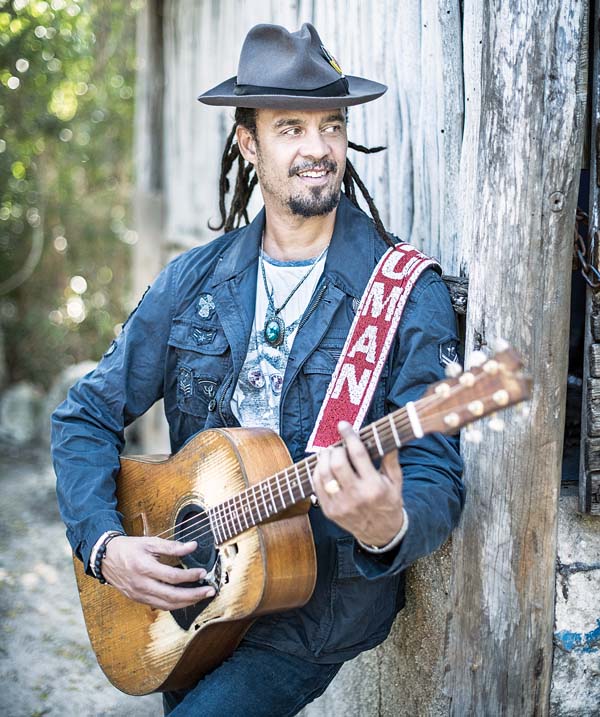 Michael Franti (left) and his group, Spearhead, perform at 7:30 p.m. Thursday, May 2 in the Castle Theater at the Maui Arts & Cultural Center in Kahului. Jungle Man Sam will open. Tickets are $29.50, $39.50, and $49.50 (plus applicable fees). Ticket prices increase on day of show. This is an all ages concert. To purchase tickets or for more information, visit the box office, call 242-7469 or go online to www .mauiarts.org. Jay Blakesberg photo

Released as a companion to his superb “Stay Human” documentary, which was screened last year at the Maui Film Festival, the album contains all that we love about Franti — exuberant lyrics, life-affirming messages and soul-stirring music from the jubilant “Little Things” to the rousing “Enjoy Every Second,” which is “dedicated to everybody out there living life in the present moment.”

“As I was making the film, I was writing songs,” Franti explains. “People were moved by the film. They were moved to tears, and they came up to me after saying that, ‘it had made a difference in my life and it’s made me think about doing things differently, and how I want to be contributing to the world.’ That was the hope — that people thought about what does it mean to be their authentic self and how do you recognize that in others, and how do we do compassionate deeds that improve the lives of everyone.”

Creating what he has called “conscious music for the masses” with Spearhead for around 25 years, Franti has a unique talent for addressing social injustice while offering potent antidotes wrapped in uplifting music.

Addressing our extreme times on the opening, “Little Things,” he remembers, “… when a concert / Was the funnest [sic] thing we ever did / Nobody running for the exit,” and how, “… a bar fight … / … never ended in a gun fight.” At least we have the power, he sings, “To throw a little smile at somebody passing by you.”

“I really feel that this time we’re in right now is very challenging,” he says. “When you look at everything happening in the world politically and the divisions in our country, how do we bridge these gaps? How do we create a sense of real connection between people? That’s hard to do because people have such polarized opinions.

“I think about the Civil War and how families were divided and brothers were fighting on different sides. It’s the same thing I see happening now, and it’s painful. For a musician, music’s goal is to bring people together. I want to write songs that do that, that make people dance and make people feel good and feel inspired or uplifted. But you also don’t want to shy away from the reality of what is happening in the world now.

“Sometimes you have to look at those hard realities and talk about them. If you’re just writing the world’s a beautiful place and let’s all get along, I feel you miss the important things that really need to change.”

Guest appearances on the album include Oahu-based reggae singer HIRIE on the buoyant, “Only Thing Missing Was You 2,” and Spanish-American singer Victoria Canal on the remarkable, “The Flower,” where the duo affirms: “We could be the healing / We can be the flower in the gun.”

“Victoria is one of the most inspiring people I’ve ever met,” he explains. “She was born without most of her right arm and she taught herself how to play piano, and most recently she’s been teaching herself how to play guitar. I came across her on Instagram and I sent her a message: ‘I love what you do, let’s write a song together and go on tour.’ She wrote back, ‘That’s great, but who the hell are you?’

“She came down to Nashville, and we started talking about how we were both bullied as kids. She was bullied because she was born without one arm, and I was bullied because I looked different from the other kids in school — I was usually one of the only brown kids.

“We started writing ‘The Flower’ because it’s really a song about how you stand up to bullying and be yourself. The worst aspect of it is when kids get shot and people get killed. Violence comes from this anger and mistreatment of others.”

A powerful music video for the song features a cross-section of survivors and family members of victims of gun shootings. It premiered at an End Gun Violence Together rally in Los Angeles.

“When we went out to make the video, I traveled around the country and I spoke to families who had been affected by gun violence — people at the Pulse nightclub shooting in Orlando, people in Vegas at the shooting at the Route 91 concert and the shooting at Parkland High School. But also in my neighborhood in San Francisco we have a lot of gun violence, people who have been shot on the street and people who have had their kids killed by police officers.

“Gun violence affects every aspect of our culture today. Almost 40,000 people (more than 100 a day) were killed by gun violence last year. I believe it’s possible to reduce that number. I just played at an event with an organization that’s working to ban assault weapons in Florida and require people who own them, currently, to register them. It’s important to write songs that can become anthems for a movement like that, but I also believe, as an artist, it’s important for me to show up and try to actually help move policy.”

Stylistically, Franti’s latest album is infused with flavors of reggae, rock, rap, folk and pop. One of the most exuberant songs, “When the Sun Begins to Shine” — guaranteed to gets folks up dancing in concert — is a joyous meld of country, bluegrass and blues.

“I want my music to be a tonic for people,” he concludes. “We try to write it into songs, and when we go out on tour we’re all singularly focused on trying to put on the best performance every night with the most energy and connected to spirit so that people feel it. That’s the mission, and we’re grateful to be able to do it.”

The concert will also feature the films “Supermonk” and “Sound of Tibet and Peace.”

The Maui Choral Arts Association presents “Those Were the Days” at 3 p.m. Sunday in the MACC’s Castle Theater. Artistic Director Gary Leavitt and pianist Lotus Dancer along with a chorus of 85 singers will perform favorites from the ’60s, ’70s and ’80s, including classics by Queen, the Beatles and Neil Diamond.

• Tickets are $30 for adults and $15 for students with an ID and children 18 and younger (plus applicable fees).

A bunch of Maui bands will perform at a benefit on Friday for Charley’s Restaurant & Saloon in Paia.

“This event is an evening of music to generate funds to upgrade and repair production gear at Charley’s,” says organizer Justin Morris. “Our main goal is to upgrade the main power amp rack and monitors. I am in the process of setting up a crowd-fund campaign leading up to the event.”

The Black Cadillacs will kick off the show at 5 p.m., followed by Pat Simmons Jr. at 6 p.m., and Yum Yum and Sweet Beets at 7 p.m.

The Deborah Vial Band plays at 8 p.m., with the Free Radicals beginning at 9 p.m., followed by Flat Jackson at 10 p.m.

B.A.D.S. performs at 11 and Yumyum Beast takes the stage at midnight. DJ Illz will close the show and play in between acts, and Charley’s regular Mark Johnstone will sit in.

Jimmy Dillon will present an evening of “Acoustic Soul” at 7 p.m. Saturday at the Maui Coffee Attic in Wailuku. Back in the late 1970s, Dillon played on Maui with the band The Edge at the Blue Max, accompanying visiting stars like Elton John and Boz Scaggs. Later in the Bay Area, he became Clarence Clemons’ (Bruce Springsteen’s late saxophonist) musical director.