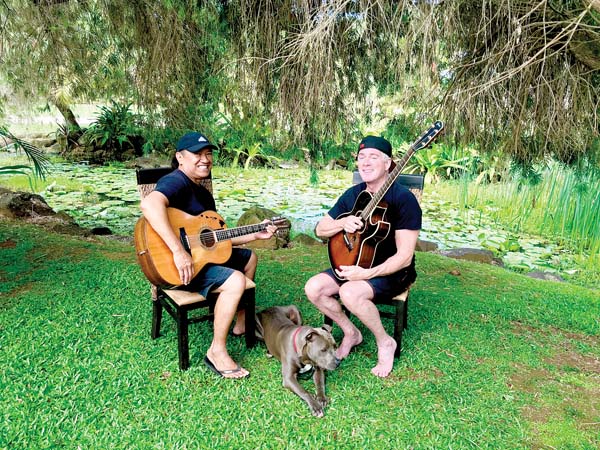 Keli‘i Kaneali‘i (left, and his dog Ezekiel) and Barry Flanagan, the original HAPA duo, reunite after 17 years at 7:30 p.m. Sunday, May 19, with an added second show at 7:30 p.m. Sunday, May 26 in McCoy Studio Theater at Maui Arts & Cultural Center in Kahului. Tickets are $35, $45 and $65 (plus applicable fees) and are available at the box office, by calling 242-7469 or by visiting www.mauiarts.org. Photo courtesy the artists

Fans of the original HAPA, featuring founders Barry Flanagan and Keli’i Kaneali’i, will be overjoyed to hear that the legendary duo have reunited and will play two concerts, both at 7:30 p.m., on May 19 and May 26 in the McCoy Studio Theater at Maui Arts & Cultural Center in Kahului.

“It’s really exciting,” says Flanagan about the reunion. “It’s like singing with your brother. We were 18 years together and 17 apart, and we’ve been back now about a year, with a tour of Japan and some shows on the Mainland.”

“I’m grateful to have the opportunity to do it again,” says Kaneali’i.

Formed on Maui in 1983, they swept the Na Hoku Hanohano Awards in 1994 for their ground-breaking, self-titled debut album. Winning Best Album of the Year, Group of the Year and Song of the Year, the recording featured original compositions such as “Lei Pikake,” “Ku’u Lei, Ku’u Ipo” and “Olinda Road,” which became island classics.

Defining some of the best of contemporary Hawaiian music, the popular duo excelled at memorable songwriting, magical vocal interplay, stellar musicianship and a refined artistic vision.

In 1997, they returned with another remarkable recording, “In the Name of Love,” featuring standout originals like “Nani Wale O Ka’iulani,” “Kahea V’ilani,” and “Manoa, In The Rain.” Taking its title from the U2 song, the duo brilliantly revamped “In the Name of Love” adding Hawaiian chant by Charles Ka’upu and the words of Martin Luther King Jr.

When the Hoku nominations were announced, the superb album just received one for Group of the Year. They lost to Na Leo Pilimehana.

Flanagan and Kaneali’i last recorded together in 1999 with “Namahana,” which included more gems like the gorgeous “E O Mai Ku’u Milimili” and the slack key instrumental “Stars In the Morning Sky.”

Over the years, HAPA continued to tour and record with Flanagan joined by Nathan Aweau (recording “Maui,” which won Hokus for Album of the Year and Contemporary Hawaiian Album) and later Ron Kuala’au.

Outside of HAPA, Flanagan regularly performs on Maui with Eric Gilliom at Fleetwood’s on Front St. in Lahaina on Sunday afternoons and Nalu’s South Shore Grill in Kihei with a dinner show on Saturday evenings. The duo released a “Live at Nalus” CD in February, which features a few HAPA classics. It’s available at CD Baby. Kaneali’i released the solo album, “Kaua’i,” in 2009.

The reunion of the duo’s founders last year was foreseen by both artists in vivid dreams.

“It wasn’t like I hadn’t thought about it over the years, as there were different incarnations of HAPA,” Flanagan adds. “Then we both had this vision, and through mutual friends it was like, ‘So you feel like getting back in the saddle again?’ Then it happened, and the first time we sang together there was a magic feeling. It’s great to hear the material that we recorded live again.”

Before their Maui concert, the duo has been spending time on Kauai rehearsing and composing new songs for a forthcoming album.

“We’re doing new stuff,” says Flanagan. “The task at hand is to come up with a full album before the end of the year. We’re just not leaning on the older material. We’ll have something fresh.”

For many years, the Brothers Cazimero would celebrate Hawaii’s May Day tradition with special concerts on Oahu and Maui. They last appeared together in 2014 on stage at the Castle Theater.

The brothers were pioneers of contemporary Hawaiian music and performed together since helping spearhead the Hawaiian Renaissance with The Sunday Manoa in the early 1970s.

Creating a legacy unmatched by any other island artists, they released more than 35 albums and received numerous Na Hoku awards, beginning with their self-titled debut in 1975, and with their last studio album “Destiny” in 2008.

Their inspired combination of gorgeous vocals, soaring harmonies and deft interplay between stand-up bass and 12-string acoustic guitar was heard on such classic songs as “Nani Hanalei,” “Haleakala,” “Pupu A’o Ewa” and “Home in the Islands.”

After graduating from Kamehameha High School, the brothers teamed with Peter Moon, forming the influential group, The Sunday Manoa.

The release of “Guava Jam” in 1969 by the group ushered in what became known as the Hawaiian Renaissance in contemporary local music. In the liner notes, Moon wrote: “The Sunday Manoa breathes new life into the music of the past, enhancing the flavor of old with the influences of today.”

Once out on their own, the brothers’ music became the sound of Hawaii. Besides their amazing vocal chemistry, performing with standup bass and acoustic guitar made them unique.

The Cazimero’s album “Some Call It Aloha … Don’t Tell” was nominated for a Grammy Award for Best Hawaiian Music Album in 2005. A year later, they were inducted into the Hawaiian Music Hall of Fame.

Studying hula under Aunty Maiki Aiu Lake, Robert was encouraged by his teacher to form an all-male halau. Viewed as a hula rebel, he founded Halau Na Kamalei in 1975, the only male halau in Hawaii at that time.

Balancing his music career with hula training, his halau last competed at Merrie Monarch in 2015 and won the overall title.

As a solo artist in recent years, he has released the CDs “Hula” and “Hula 2,” featuring favorite traditional and contemporary songs for hula, where he sang and played piano. He was nominated for a Grammy Award for “Hula.” In addition, he has been featured as a guest artist on albums by Amy Hanaiali’i, Sean Na’auao and Raiatea Helm.

• The Cazimero Lei Day Concert is presented at 7:30 p.m. Friday in the MACC’s Castle Theater. Preshow festivities start at 5:30 in the Yokouchi Pavilion Courtyard featuring Pa’u o Hi’iaka, under the direction Kumu Hula Hokulani Holt. Tickets are $12, $28, $40 and $65 (plus applicable fees). Tickets are half-priced for kids aged 12 and younger, and MACC members get a 10 percent discount.

Michael Franti & Spearhead perform in the MACC’s Castle Theater tonight at 7:30. Long known for his globally conscious lyrics, powerful performances and dynamic live shows, Franti has been at the forefront of lyrical activism, using his music as a positive force for change.

Reviewing his latest album, “Stay Human, Vol. II,” the Associated Press praised: “In these deeply divided times, Franti gives listeners about 45 minutes of nothing but good vibes, optimism and a charge to take that feeling out into the world.”

With no jazz and blues festival planned for Maui this year, the eighth annual Big Island Jazz & Blues Festival will be presented at the Mauna Kea Beach Hotel May 30 through June 2.

• General admission is $60, and $100 for VIP. More information is available at www.bigislandjazzandbluesfestival.com.