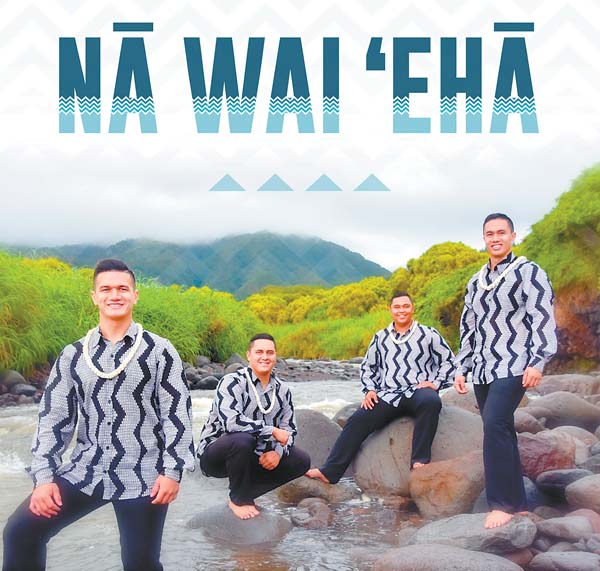 The 42nd annual Na Hoku Hanohano Awards will take place on May 25 at the Hawaii Convention Center. For more information and a complete list of nominees, visit www.nahokuhanohano.org. Photo courtesy the artists

It’s an extraordinary feat for a group to release a debut album that is subsequently showered with Na Hoku Hanohano nominations. For Maui’s Na Wai ‘Eha, it was a dream come true, with its marvelous self-titled debut recording being honored with 10 nominations.

“It was totally unexpected,” says Kamalei Kawa’i, Na Wai ‘Eha’s bandleader. “It brought me to tears that we were even nominated for that much. I feel super blessed.”

Comprising two sets of talented brothers, Kalanikini and Kahikina Juan, and Kamalei and Kamaehu Kawa’a, the musicians adopted their name for the four streams of Waikapu, Wailuku, Waiehu and Waihee, collectively known as Na Wai ‘Eha.

It seems more than symbolic that they were bestowed with so many Hoku nominations at a time when essential water rights are still being fought by Native Hawaiians. 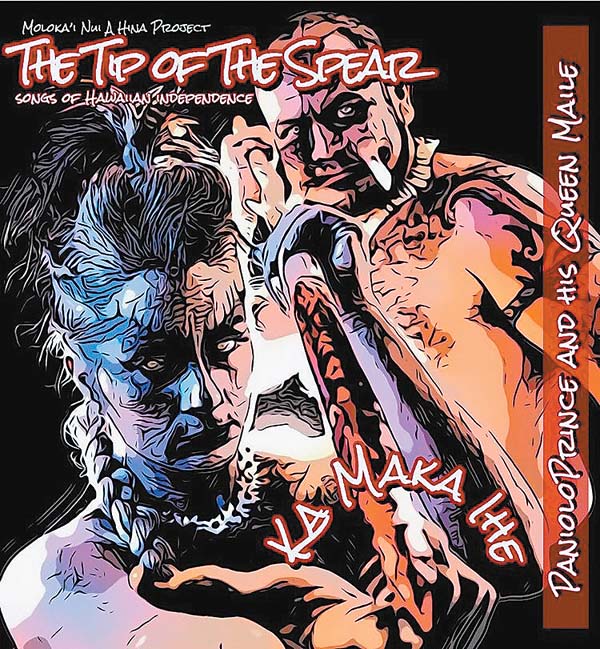 “We all grew up in the same area,” Kamalei explains. “The main reason we felt it was important to take on that name and carry that name wherever we go was to really bring awareness to the struggles that we have with our water in Hawaii, with all the diversions happening. We wanted to carry the name to not only represent the area we come from, but also to bring awareness to this constant battle that Native Hawaiian people are fighting to bring the waters back to their natural flow from mauka to makai, from the uplands to the ocean.”

All fluent in Hawaiian language and hula, the Kawa’a brothers dance with Halau Kekuaokala’au’ala’iliahi, under the direction of ‘Iliahi and Haunani Paredes, and have competed in the Merrie Monarch Festival.

“Na Wai ‘Eha’s music is magical: There is sweetness to their harmony and mana in their deliverance,” their kumu hula, ‘Iliahi Paredes, praises the musicians in the album liner notes.

Nine beautiful, original Hawaiian language songs on the album are highlighted by four magnificent voices that collectively produce heavenly vocal harmonizing. The songs are all Hawaiian music gems and reflect their love for family members, nature and their homeland.

“We wanted to honor our family on the CD, and pay tribute to our birthplace and a few people who have inspired us, and of course, our Heavenly Father,” says Kamalei. “Every song on the album relates to those four things.” 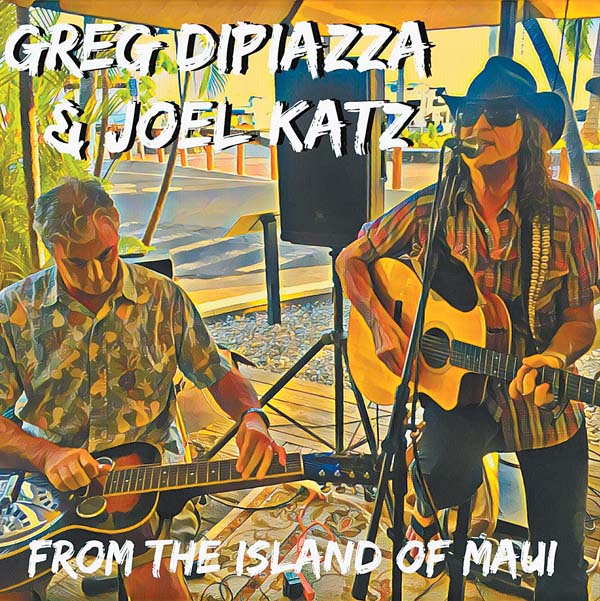 As far as musical inspirations, they include the acclaimed group Na Palapalai and the late Maui falsetto legend Uncle Richard Ho’opi’i.

“We chose to cover ‘Na Wai Kaulana’ to honor Uncle Richard Ho’opi’i who truly believed in us,” Kamalei explains. “It’s a song that he and his brother Uncle Sol made famous.”

They close the album with a moving Hawaiian language version of “I Call Him Lord,” which Na Palapalai recorded in 2004.

“We paid tribute to them for also being another inspiration for us along our musical journeys,” Kamalei adds.

With 10 Hoku nominations, it’s highly likely that this very gifted Maui band will triumph at the awards ceremony on May 25.

Last year, Molokai’s Paniolo Prince and His Queen Maile released the brilliant recording, “Tip of the Spear: Songs of Hawaiian Independence,” which is nominated for Hip Hop Album of the Year.

“I’m super stoked,” says Hanohano Naehu, aka the Paniolo Prince. “It helps to validate that it was high quality.”

A proud, self-styled aloha aina warrior, Hanohano is acclaimed as a gifted orator, poet, musician and fishpond guardian. Raised as a paniolo, he has been a guardian for many years at Keawanui, the 800- year-old Hawaiian fishpond on Molokai. A coach for the Molokai Youth Slam Poets Society, he believes that through music a message of “aloha aina,” or “deep love for the land,” will flourish.

The inspiration to produce Molokai’s first hip-hop album derives from his years of activism.

“Growing up on Molokai, I’ve experienced a lot of stuff, and I was gifted to tell stories,” he explains. “The responsibility was laid on me by my mom and later by one of my mentors, Uncle Walter Ritte. I was going to Hawaiian sovereignty meetings with my mom since I was 8 years old. I started all this aloha aina activism fighting for nature and our culture. The final piece was getting married to this amazing wahine who is a storyteller, hula dancer and native speaking.”

A remarkable project, “Tip of the Spear” artfully fuses activist rhymes with stirring Hawaiian chant by his partner, Queen Maile.

Affirming his talent for “expertly rhyming in perfect timing” on the opening,“Molokai,” Hanohano declares, “Hawaiian is the only way to go on / feel the mana getting stronger / going back to the language and the culture.”

The ancient prophecy chant “E Iho ana o Luna” opens “Guardians,” where he decries the “environment in rubble / tipping point is on the bubble.”

On the powerful protest song, “Let the Water Flow,” which also opens with Queen Maile’s moving chant, he raps, “You steal the water / you rape our land / doing it every day / killing the planet / I can barely hear mama earth still breathing.”

“Hip-hop is the lure I like to use,” says Hanohano. “I’ve got to go fishing for a couple of generations. I’ve yelled with a megaphone and talked at rallies, but hip- hop works better than that.”

Dedicating his epic protest anthem, “Aloha Aina Ho’i E,” to “Palani Vaughn and all the Hawaiian loyal patriots that have never given up, never wavered and never lost hope,” Hanohano pronounces, “Our country got kidnapped.” He details how Hawaii was “The most literate nation,” references the 1843 declaration by Great Britain and France which guaranteed Hawaiian independence, as well as how Queen Lili’uokalani was falsely accused of treason.

“Ignite” finds him overjoyed by the cultural strength of Hawaii’s youth.

“In the children I see the light / courage, culture shining bright,” he raps, while Maile chants comparing the “opio,” or “youth,” to the rising smoke of Pele who never allows the flame of resistance to extinguish.

Finally on “See Clearly,” he warns how he can see “clearly through the smokescreen propaganda,” and “using words as our weapons / we want people to wake up,” he continues, “Monsanto, A&B, EMI, Babylon / you will fall / as consciousness is on the rise / and will intensify.”

“Every song is a condensed version of a bigger story,” Hanohano concludes. “I can’t give kids or anybody the whole story, but through hip-hop you can get them closer. This is the ‘Tip of the Spear’ of more stories to come. We’re on the verge of another renaissance.”

The CD,“From the Island of Maui,” teams two longtime Maui residents, guitarist/vocalist Greg Dipiazza and steel guitarist/keyboardist Joel Katz, who are nominated for EP of the Year.

In the past, Greg has led several bands on Maui, while Joel has been the keyboardist with Jimmy Mac and the Kool Kats for years. He then expanded to playing lap steel guitar, and released the impressive albums, “Hawaiian to Jazz” and “Adventures in Hawaiian Steel Guitar.”

“I’ve been doing a kind of Western-rockabilly thing, and I wanted to bring in a Hawaiian flavor, and Joel is a master of the Hawaiian lap steel,” as Greg explains their teaming.

“It’s a work of love. We really put our hearts into this EP,” Greg says. “We were so inspired.”

With highlights including “Maybe” (with Marcus Johnson on bass) and “Pouring Rain,” they get a little funky on the sensual “Sandman” and dive full-tilt country on “Cowboy’s Dream.”

Greg’s inflection in his vocals sometimes recalls Bryan Ferry, so it seems like we’re hearing Roxy Music-gone-county, mixed in with some yearning Chris Isaac-style.

The duo is already making plans for a follow-up recording, adding a horn section with saxophonist Rock Hendricks.

Greg and Joel perform with bassist Barney Cortinez and percussionist James Somera from 5 to 8 p.m. on Thursday evenings at Lahaina’s Pioneer Inn.