Cheers to the red, white and blue!

Free jazz tonight in Lahaina in celebration of Fourth of July 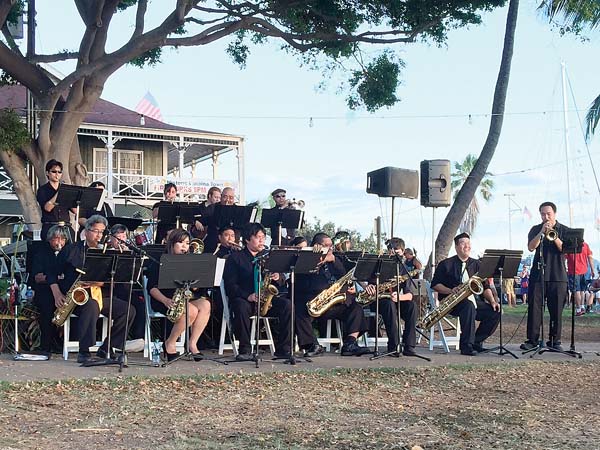 Enjoy two free concerts tonight presented by Jazz Maui prior to the Lahaina fireworks show. The annual “Concert in the Park” on the Lahaina Public Library lawn begins at 5 p.m. and features the Chop Suey Jazz Orchestra, vocalist Sheryl Renee and the Maui Community Band. From 5 to 10 p.m. Photo courtesy the artists

Founded in 2009, the Chop Suey Jazz Orchestra is a 26-piece group made up of local musicians, students and music educators under the direction of Casey Nagata. Performing all over Maui, they typically play a mix of contemporary jazz favorites fused with big band music, hip-hop and funk.

Acclaimed jazz/blues vocalist Renee received the “Presidential Seal of Approval” when she was selected to perform the national anthem for President Barack Obama in 2009.

The Maui Community Band, founded by Lisa Owen in 2003, comprises more than 40 members ranging in ages from 8 to 78, who will perform patriotic favorites for the special occasion.

At the Outlets of Maui, “Jazz at the Shops” features performances by jazz guitarist Prem Brosio, the Jake Thomas Quartet and the King Kekaulike Na Ali’i Big Band. 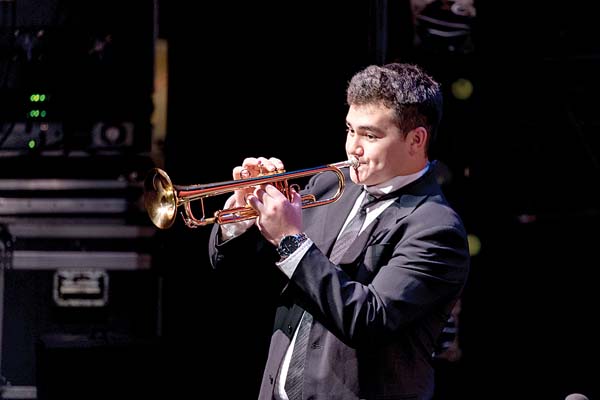 Paul Simon’s decision to perform his first ever concerts on Maui on Aug. 13 and 14 at Maui Arts & Cultural Center’s A&B Amphitheater in Kahului is a major boon for the local environmental groups Auwahi Forest Restoration Project and Kua’aina Ulu ‘Auamo. The music icon is donating the net proceeds from both shows to the two nonprofit organizations.

“The Auwahi project has received an amazing gift from an amazing man,” the folks at the Auwahi Forest Restoration Project reported. “Just as these Paul Simon concerts are historic, the funds they generate will also make history in accomplishing something truly significant at an ecological level, something with the potential to be grand and majestic. A tract of about 23 acres has already been selected at Auwahi for restoration. This sanctuary harbors many dry forest tree species found nowhere else in the world, including the incredibly rare mahoe, holei, ‘aiea, and alani.”

The KUA folks are equally grateful. 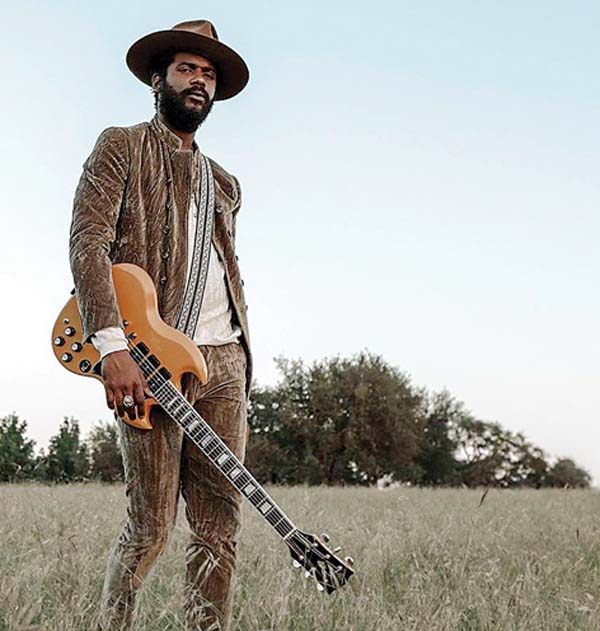 Gary Clark Jr. brings his unique fusion of blues, rock and soul with a bit of hip-hop to Castle Theater later this month. Photo courtesy the MACC

“Mahalo nui loa, Mr. Paul Simon, for thinking of KUA and Hawaii’s grassroots communities, their places and relationships with them and the awesome diversity of life in these islands,” the organization posted. “Your contribution lifts up our collective work with the networks of E Alu Pu, Hui Malama Loko I’a and the Limu Hui and advances our shared vision of ‘aina momona (“fat lands“) — rich abundant ecological systems that contribute to community well being.”

“Simon turned it into a party in the park where complete strangers could groove together to ‘Diamonds on the Soles of Her Shoes,’ harmonize on the ‘lie la lie’ chorus of ‘The Boxer,’ and jump up and down while screaming out every word to “You Can Call Me Al.’ ”

Before embarking on the final tour, Simon announced, “I am very grateful for a fulfilling career and, of course, most of all to the audiences who heard something in my music that touched their hearts.”

A couple of days before his Maui shows, Simon will headline the Outside Lands festival in San Francisco’s Golden Gate Park, as a benefit for the San Francisco Parks Alliance and Friends of the Urban Forest. 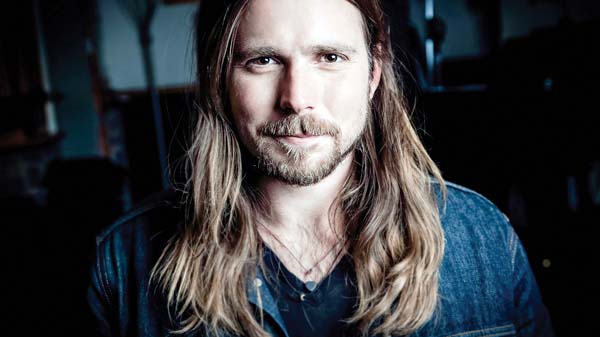 Lukas Nelson & Promise of the Real back Neil Young in a co-headlining festival with Bob Dylan at London’s Hyde Park next week. Photo courtesy the artist

Before performing at the legendary Glastonbury Festival in the U.K. last weekend, Lukas Nelson posted a cool YouTube clip of him playing a version of the Simon & Garfunkel classic, “Homeward Bound,” in a London hotel room. “Homeward Bound” was originally released on their 1966 album, “Parsley, Sage, Rosemary And Thyme.” It was composed by Simon during his time living in England while he was waiting for a train back to London.

On July 12, Lukas Nelson & Promise of the Real will back Neil Young in a co-headlining festival with Bob Dylan at London’s Hyde Park, where the Stones once played a free concert for half a million people.

As part of Ben Verdery’s 20th annual Classical Guitar Master Class on Maui, a free concert will be presented tomorrow at noon at University of Hawaii Maui College with Verdery performing two duets with Ian O’Sullivan.

“I’ve never played at the college, and I thought it would be fun to be part of the show,” says Verdery. “We’ll play a Hawaiian classic arranged by Ian and a piece I wrote.”

The concert will also feature student guitarists Nicholas Padmanabhan, Ahhyun Noh, Reade Park and Marvin Ren in a program including music by Bach, Villa-Lobos, Dyens and others.

“The other players are incredibly good,” he adds.

Another free concert will be presented on Sunday at 2 p.m. at St. John’s Episcopal Church in Kula featuring performers from Verdery’s master class. John Olson and Thomas Donahue will perform music for guitar and organ by Bach and Rodrigo; and guitarists Padmanabhan, Noh and Ren will perform solo guitar music by Dowland, Sakamoto, Bach, Castelnuovo-Tedesco, Rodrigo, Schubert and Morel.

“The sister of one of the students plays the koto,” Verdery explains. “She’s apparently very good. And I’m currently writing a piece, ‘What God Looks Like,’ that will be a premiere for guitar orchestra and voice with Gioia De Cari at the Makena and Lahaina concerts. I’m very excited about it. Paul Simon might want to come.”

The reunited original HAPA will be back one more time for their fourth show at the MACC’s McCoy Studio Theater at 7:30 p.m. July 28. It seems like folks just can’t get enough HAPA featuring Barry Flanagan and Keli’i Kaneali’i.

Formed on Maui in 1983, they swept the Na Hoku Hanohano Awards in 1994 for their ground-breaking, self-titled debut album. Their most loved songs include “Lei Pikake,” “Ku’ulei Ku’uipo,” “Olinda Road” and “Manoa, in the Rain.” The duo is currently composing songs for a forthcoming album.

The Mana Maoli collective have just released an amazing new video updating the powerful activist classic, “Hawaii ’78,” immortalized by Israel Kamakawiwo’ole. Filmed across Hawaii, it features around 40 musicians along with children from 14 schools. Some of the artists performing include the Makaha Sons, Raiatea Helm, Jake Shimabukuro, Kaumakaiwa Kanaka’ole, Kimie Miner, The Green, Sudden Rush and Skippy Ioane and Kapali Keahi shot on Maui.

On the horizon, Gary Clark Jr. will make his Maui debut on Sunday, July 21 at 7:30 p.m. in the Castle Theater at the MACC. Known for his exciting fusion of blues, rock and soul music with elements of hip-hop, Clark won a Grammy for Best Traditional R&B performance in 2014 for his song, “Please Come Home.”

Clark’s latest album, “This Land,” has been getting rave reviews. A recent Newsday concert review praised him as, “rock’s breakout star of 2019.”

• Tickets are: $44, $54, $64 and $150 for VIP (prices increase on day of show; plus applicable fees). The VIP package includes priority entry and a GCJ 2019 guitar accessory pack. Every ticket purchased online includes choice of a CD or a digital copy of “This Land.” Instructions will be sent by email on how to receive the album after ticket purchase. 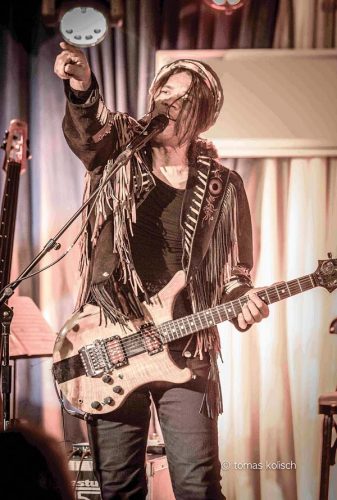