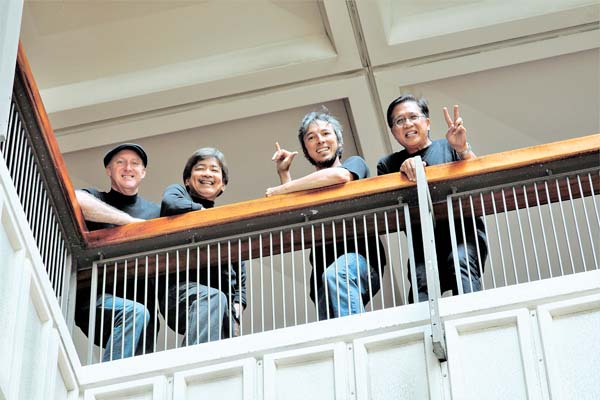 BEAT-LELE performs its ukulele Beatles’ tribute at 7 p.m. Saturday in McCoy Studio Theater at Maui Arts & Cultural Center in Kahului. Tickets are $30 and $35 (plus applicable fees). For tickets and information, call 242-7469, visit www.mauiarts.org or head to the box office. Photos courtesy the MACC

In the past we’ve heard Hawaii’s ukulele virtuoso Jake Shimabukuro play a few Beatle tunes in concert, and now we have an opportunity to see a band which entirely focuses on Beatles’ songs all played on ukulele when Beat-Lele performs in the Maui Arts & Cultural Center’s McCoy Studio Theater on Saturday.

Prior to adopting the ukulele as their primary instrument, the Oahu-based quartet were a traditional Beatles tribute band, whose members all grew up loving the Fab Four.

“We’ve been a band for about 10 years,” Muth explains. “We didn’t take ourselves too seriously, we just loved the Beatles. We played very sporadically with a drum set and electric guitars. Then about four years ago, one of our members had just taken up the ukulele, and he started learning all these Beatles songs. He thought, why don’t we be the first ever Beatles tribute on the ukulele? So John, Paul and George switched over to ukulele, and I switched to the cajon, which could complement the acoustic sound. 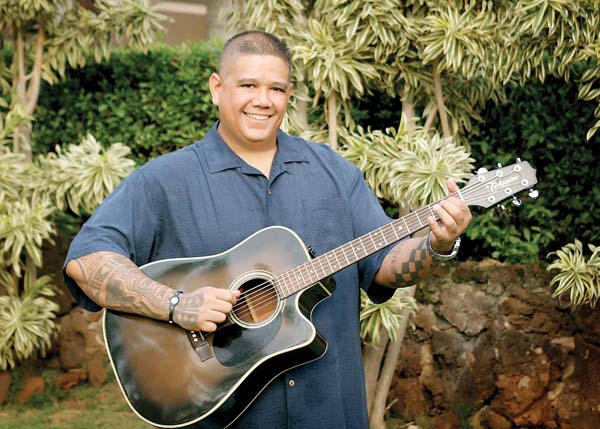 And remarkably they do sound close to their inspiration. After the release of their debut recording of “If I Fell” was posted on Youtube in 2017, Beatles’ fans were knocked out by the band’s impressive vocal harmonies.

The video was such a hit, the band was invited to fly to Liverpool, England, to perform at the prestigious annual Beatles festival, the seven-day International Beatleweek, which draws musicians from around the world.

“It was an amazing experience,” he says. “We were so warmly received. We had people who had been to the festival for many years telling us that we were their favorite band. They were blown away how full we can sound on ukuleles and a cajon.

“It was great to represent Hawaii. There were more than 70 bands from about 25 different countries, and we were one of three from the U.S. We got invited back this year, but we have other commitments.”

One of the highlights for the musicians was an opportunity to perform at the legendary Cavern Club where the Beatles began their career.

“That was it for us; we can die now and go to heaven,” he enthuses. “We also went to London and visited Abbey Road Studios and crossed the famous ‘Abbey Road’ crosswalk.”

As far as the group’s repertoire, favorites include “A Hard Day’s Night,” “Here Comes the Sun,” “She Loves You,” “Can’t Buy Me Love” and the “Golden Slumbers’ medley.

“We try to cover the whole gamut from ‘Love Me Do’ to ‘Let It Be’ and everything in between,” he says. “More recently we’re playing songs from their later years, trying to do more complex songs from ‘Sgt. Pepper’ and ‘Abbey Road,’ where there are a lot of strings and instrumentation. We try to duplicate that stuff on the ukuleles like with ‘Eleanor Rigby’ and ‘Penny Lane.’

How about “Strawberry Fields”?

Beat-Lele: “An Ukulele Tribute to the Beatles” is presented in the MACC’s McCoy Studio Theater on Saturday at 7 p.m. Tickets are $30 and $35 (plus applicable fees), available at the box office, by phone at 242-7469, and online at www.mauiarts.org.

For those who attended one of Paul Simon’s historic shows at the MACC, it will likely be remembered as one of the best ever on Maui. Drawing more than 8,000 fans over two nights, it was undoubtedly one of the greatest assemblies of musical talent on stage with up to 14 exceptional musicians backing the iconic artists with a multitude of instruments.

A snapshot overview of his artistic evolution, songs ranged from the sublime masterpiece of “The Sound of Silence” (From 1964’s “Wednesday Morning, 3 A.M.”) to the complex orchestrated re-arrangement of “Can’t Run But,” from his most recent “In the Blue Light” album.

Simon is a genius sound architect. Rarely has such an esteemed artist so effectively adapted so many musical styles and genres into his rich tapestry. Flavors of American folk, South African, Brazilian, zydeco, reggae, jazz, neo-classical and doo-wop have all enhanced his lyric poetry. And at the MACC, many timeless songs were given new life with dynamic arrangements that drew on the talents of his international ensemble as he played merry conductor.

Maui’s newest resident star looked like he was thrilled to be giving back to our community with these benefit shows.

“Thank you so much, I am so happy to be here,” Simon beamed as he exited the stage to massive applause.

Over the weekend Art Medeiros of the Auwahi Forest Restoration project took Simon up in a helicopter to see their work.

He posted: “The Auwahi team had the honor of hosting Paul Simon on a biological tour of Maui that included landing at Auwahi, talking story with folks, planting a tree and viewing by air the area of ancestor trees to be protected at Auwahi with his donation.”

CATCHING UP WITH KAPONO

Henry Kapono was among the musicians (including Kris Kristofferson and Michael McDonald, who joined in on a funky “Cecilia” on the second night) enjoying Simon’s brilliant shows.

Kapono will team with Sean Na’auao for an Artist 2 Artist performance at 7:30 p.m. Friday in the MACC’s McCoy Studio Theater.

Winner of numerous Na Hoku Hanohano awards, including Male Vocalist of the Year, Song of the Year, and Album and Rock Album of the Year, Kapono is currently working on a covers recording project of popular songs.

Leaving the band to concentrate more on Hawaiian music, Na’auao was influenced by legends like the Sons of Hawaii, the Makaha Sons, The Sunday Manoa and the Brothers Cazimero.

“All the people who came before me paved the way for us to do what we do now,” Na’auao reported. “I’m so fortunate to be blessed to be able to perform Hawaiian music.”

His most recent album, “Na Keiki O Hawai’i,” featured four songs composed by respected Kumu Hula Frank Kawaikapuokalani Hewett. Dedicated to the children of Hawaii with the hope that his music could inspire a love of their origin and roots, it was nominated for Male Vocalist and Island Music Album and won the Hoku for Engineering Award–Hawaiian.

Other concerts in the Artist 2 Artist series include Blayne Asing on Sept. 13, Jerry Santos on Oct. 11 and Alx Kawakami on Nov. 8.

Artist 2 Artist tickets are $35, $45 and $65 (plus applicable fees). A backstage “Hangin’ with Henry” package is also available and includes a session from 6:30 to 7 p.m. prior to the show, along with his guest for the evening, plus some talk-story, music and photo/autograph opportunities. Separate “Hangin’ with Henry” tickets are $45 per person per show (plus applicable fees) and are available at the MACC box office in person or by phone. Patrons must purchase a concert ticket prior to the Hangin’ ticket. MACC members receive a 20 percent discount when purchasing tickets to all four concerts, and a 10 percent member discount for shows bought individually.

Willie K and the Warehouse Blues Band have been playing sold out shows in California. In late October they will embark on a Mexican Riviera “Legendary Rhythm and Blues Cruise,” joined by Los Lobos, Taj Mahal and Keb’ Mo’.