Master of his craft Paul Simon

Takes a break from retirement to benefit isle environmental groups 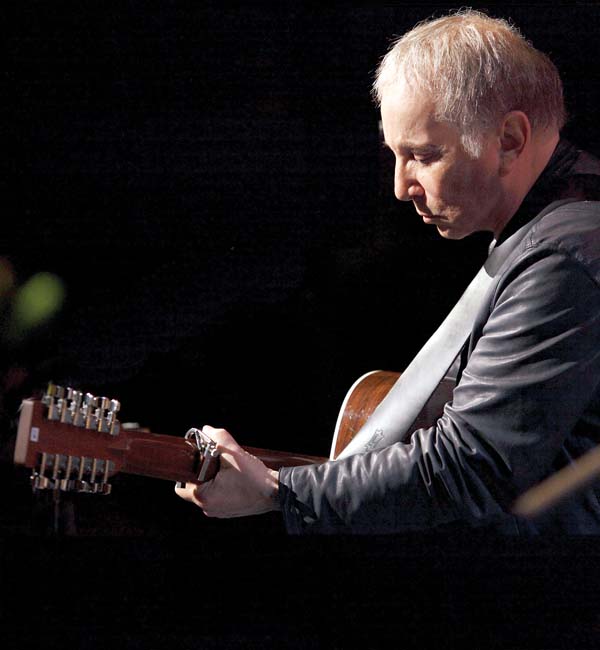 Paul Simon performs at 7:30 p.m. Tuesday and Wednesday at the Maui Arts & Cultural Center’s A&B Amphitheater in Kahului to benefit the Auwahi Forest Restoration Project and Kua‘aina Ulu ‘Auamo environmental groups. Gates open at 6 p.m. Tickets are $55, $85, $125 and $185 (plus applicable fees), and are available at the box office, by phone at 242-7469 and online at www.mauiarts.org. Mary Ellen Matthews photo

It was the autumn of 1965 and Paul Simon was staying in Brentwood, a small town outside of London. He had fallen in love with a local woman, who he put on the cover of his first solo album, “The Paul Simon Songbook,” and immortalized in “Kathy’s Song,” where he sang about, “. . . England where my heart lies” and where he longed for in “Homeward Bound.”

One morning an announcement at Brentwood School informed the students a visiting American folk singer was going to give a free concert that afternoon in the assembly hall. It was Simon, and that’s when I first became a fan.

Fifty-four years later, one of America’s greatest songwriters will make his Hawaii solo concert debut playing at 7:30 p.m. Tuesday and Wednesday at the A&B Amphitheater at Maui Arts & Cultural Center in Kahului.

After announcing his retirement from touring in February 2018, the legendary musician reported he would still perform occasional benefit concerts, especially for environmental causes. Proceeds from the Maui shows will benefit the environmental groups the Auwahi Forest Restoration Project and Kua’aina Ulu ‘Auamo.

It’s not the first time he has sung on Maui. On New Year’s Eve, he hopped on stage at the Castle Theater with Woody Harrelson at Bill Maher’s comedy show. He was obviously impressed with the MACC, as he’s only playing our island.

And Simon has connected with esteemed Hawaiian legend Keola Beamer. Keola posted a photo of the two musicians having dinner at his Lahaina home in June.

“It was a beautiful Maui evening with some nice wines, lots of talk story and aloha shared,” he wrote.

It is likely that Keola will perform at the Maui shows.

Simon released what was reportedly his last studio album in August last year. “In the Blue Light” featured a collection of rearrangements of some of the legendary musician’s older songs, and some that were partially rewritten.

“This album consists of songs that I thought were almost right, or were odd enough to be overlooked the first time around,” he reported in a statement. “Re-doing arrangements, harmonic structures and lyrics that didn’t make their meaning clear gave me time to clarify in my own head what I wanted to say, or realize what I was thinking and make it more easily understood.”

A review in Rolling Stone praised: “At its best, ‘In the Blue Light’ amounts to a dream set list for devoted PaulHeads who wish he’d do entire shows of rarities.”

For Maui, it’s pretty likely we will hear many of his best loved songs — “Graceland,” “50 Ways to Leave Your Lover,” “The Boy in the Bubble,” “Mother and Child Reunion,” “Me and Julio Down by the Schoolyard,” “Bridge Over Troubled Water,” “Diamonds on the Soles of Her Shoes,” “You Can Call Me Al” and “Still Crazy After All These Years.”

Named one of the 100 Greatest Songwriters of All Time as well as one of the 100 greatest guitarists by Rolling Stone, Simon has earned 16 Grammy Awards, including three for Album of the Year (“Bridge Over Troubled Water,” “Still Crazy After All These Years” and “Graceland”).

Before heading out solo, Simon and Art Garfunkel were one of the best-selling music groups of the 1960s, with their biggest hits like “The Sound of Silence,” “Mrs. Robinson” and “Bridge Over Troubled Water” reaching No. 1 on charts worldwide.

The duo met in elementary school in Queens, N.Y., in 1953, where they learned to harmonize together, and Simon began writing original material. By 1957, under the name Tom & Jerry, they had their first minor success with “Hey Schoolgirl,” a song which imitated their idols, the Everly Brothers.

“England was magical,” he reported.

When a new version of their classic folk rock song “The Sound of Silence” became the No. 1 single in America in early 1966, the duo reunited to record their second album. By the time of their third work, “Parsley, Sage, Rosemary and Thyme,” Simon & Garfunkel had produced their first masterpiece, from the exquisite “Scarborough Fair/Canticle” to the poetic yearning of “Homeward Bound” and the delightful exuberance of “59th Street Bridge Song (Feelin’ Groovy).”

With two gorgeous voices, their innovative songs were crafted with intricate harmonies and vocal overdubs — they were often doubled to create four voices.

With their crowning achievement of “Bookends” and the marvelous “Bridge Over Troubled Water,” Simon & Garfunkel had become the biggest rock duo in the world.

Then came the breakup, followed by an even more gloriously acclaimed career for Simon.

Feeling liberated artistically, friction with Garfunkel had risen during “Bridge Over Troubled Water.”

“There were a lot of times when it just wasn’t fun to work together,” Simon told Rolling Stone. “Musically, it was not a creative team, because Artie is a singer and I’m a writer and player and a singer.”

For any fans wondering if Simon’s solo work could live up to the duo’s greatness, “Paul Simon” in 1972 blew out any doubts.

It would have been hard to imagine Garfunkel singing the funky reggae of “Mother and Child Reunion” (partly recorded in Jamaica with Jimmy Cliff’s backing band), or the exuberant samba-flavored “Me and Julio Down by the Schoolyard” (with Brazilian legend Airto Moreiro on percussion).

The complexity of the album prompted Los Angeles Times music critic Robert Hilburn to declare: “Only Stevie Wonder, among major sellers, demonstrated as much consistent musical sophistication and ambition as Simon.”

Then the dazzling “There Goes Rhymin’ Simon” cemented his genius as a, “consummate master of the contemporary narrative,” noted Rolling Stone.

So many standouts –from the jubilant gospel of “Loves Me Like a Rock” and New Orleans’ Dixieland groove of “Take Me to the Mardi Gras,” to the feel-good “Kodachrome,” the soulful Randy Newman-ish “One Man’s Ceiling is Another Man’s Floor” and the delicate beauty of the “St. Judy’s Comet” lullaby.

Recording with some top jazz players, more success followed with “Still Crazy After All These Years,” which earned him four hit singles and two Grammy Awards.

As much as Simon was admired, no one expected a stunning project like the landmark “Graceland.”

Released in 1986, at a time when he doubted his talent — “It could be that I’ve reached the point in my career where I can’t be a viable commercial force in popular music,” he had told the New York Times — “Graceland” became Simon’s most successful studio album selling around 16 million copies worldwide.

We can thank his fascination with a South African-township musical-style known as mbaqanga for inspiring the album. Heading to record in Johannesburg with South African musicians, and later with American roots artists like Rockin’ Dopsie and Los Lobos, Simon created such classics as “The Boy in the Bubble,” “Diamonds on the Soles of Her Shoes” and “Graceland.”

With lines like: “… loosing love / Is like a window in your heart / Well, everybody sees you’re blown apart,” he later referred to the title track as, “my favorite song that I ever wrote.”

A dance-remix version of “Graceland’s” songs was released last year.

Four years after “Graceland,” Simon returned with another extraordinary cultural project, “The Rhythm of the Saints,” which saw him infuse music of Latin America into his songs, working with Brazilian artists like percussion groups like Olodum and singer Milton Nascimento.

While most of his peers have creatively peeked, into the 21st century Simon kept innovating. The metaphysically inclined “So Beautiful or So What” in 2012, where he made extensive use of percussive bells, was widely lauded.

“A profound statement from a master of his craft,” praised the BBC.

And in 2016, he delivered “Stranger to Stranger,” an experimental work utilizing custom-made instruments by Harry Partch and collaborations with the Italian electronic artist Clap! Clap!

PopMatters lauded: “Nobody can do what he does. In fact it’s hard to even imagine anyone attempting to try,” and the Boston Globe hailed it as, “Simon’s richest, most instantly appealing collection since “Graceland.”

In looking back at his vast body of work, Simon told NPR that he was gratified that some of his hits like “Bridge Over Troubled Water,” have stood the test of time.

“I think the big measuring thing is, will something last a hundred years? If you write a song and it lasts a hundred years I’d say, that’s a hit. And I have a couple songs that I have a shot at it.”

BEAT-LELE –An ‘Ukulele Tribute to the Beatles is presented at 7 p.m. Aug. 24 in McCoy Studio Theater at the MACC.

Featuring Dennis Muth, Sonny Aquino, Alastar McNeil and Nolan Quiason, this unique blend of ukulele playing and perfect harmonies brings its audience back in time with great hits of the Fab Four such as “A Hard Day’s Night,” “Here Comes the Sun,” “She Loves You” and more.