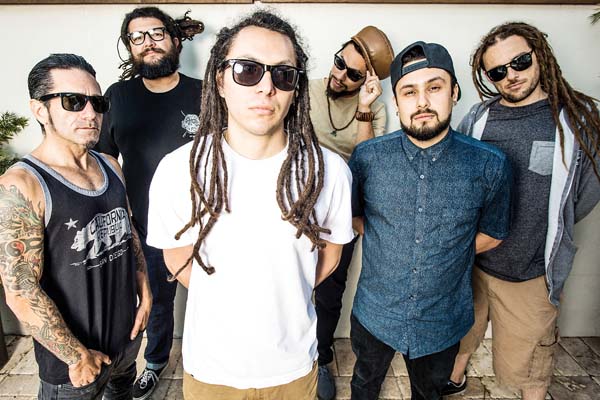 Known for their spiritually driven, rock-infused roots style of reggae, the popular Californian group Tribal Seeds headlines the second day of the Republik Music Festival Maui on Saturday at the Maui Arts & Cultural Center in Kahului.

Formed in San Diego in 2003 by brothers Steven and Tony-Ray Jacobo, Tribal Seeds climbed to the top of the Billboard Reggae Charts in 2014 with their acclaimed recording “Representing,” which featured Jamaican reggae star Don Carlos.

“We just hope to do good works,” Seeds producer Tony-Ray Jacobo told Punchland. “Being spiritual people, we feel it’s our duty to do good works while we’re here. We have a passion to help make the world a better place. Keeping with roots reggae as the foundation, you can take some chances to do something different and new.”

Besides Steven Jacobo on lead vocals and guitar, the group includes Victor Navarro on bass, Ryan Gonzo on guitar, Jamey “Zeb” Dekofsky on drums and Luis Castillo on keyboards. While Jacobo writes the group’s lyrics, his brother produces their music.

Starting as a high school band, Steven Jacobo told Rootfire, “I grew up on reggae from my parents. They would always play Bob Marley, Peter Tosh, etc. in the house when my brother and I were kids.” 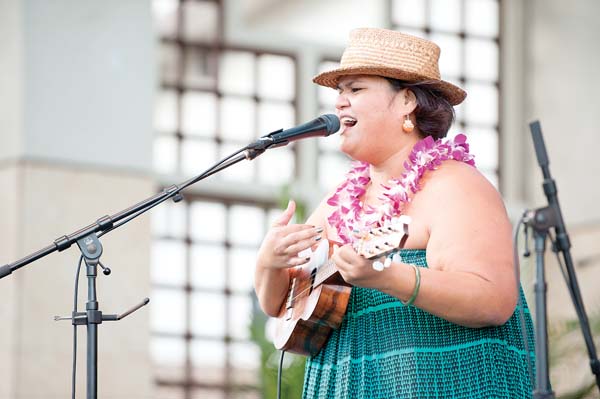 Paula Fuga is among the performers who will be on stage during the Maui ‘Ukulele Festival on Sunday. Photo courtesy the MACC

The band’s self-titled debut album, was released in 2008, winning the “Best World Music” title at the San Diego Music Awards and landing on iTunes “Best of 2008” list. Their second album, “The Harvest,” followed a year later.

For their 2014 album “Representing,” they called on friends Don Carlos, Mykal Rose, Slightly Stoopid’s Kyle McDonald and Vaughn Benjamin from the band Midnite.

“Tribal Seeds have managed to produce a reggae album filled with all the character and soul of a classic, but with a unique twist that makes it a perfect fit for the modern era,” praised Planet Stereo.

Influenced by reggae legends like Bob Marley, Burning Spear and Steel Pulse, the band has embraced the spirituality element of the music, rooted in Rastafarianism.

“I’ve always liked the deep, mystical, wise chanting style of roots music, and I try to relay that through our music,” Steven Jacobo told Rootfire. “I’ve studied Rastafarianism. I’ve tried to make sense of it all because I wanted to believe, and still do.” 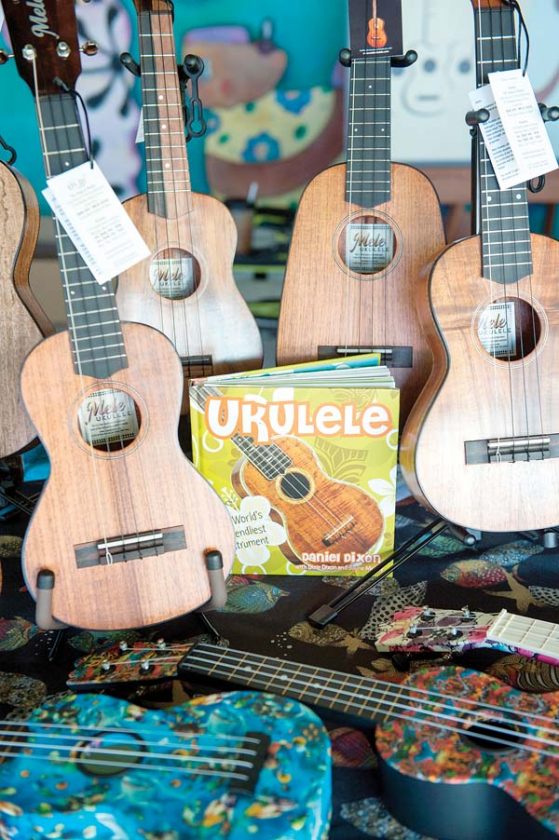 Ukuleles and all things ukulele are the focus of the festival. Photo courtesy the MACC

Their most recent recording, the EP “Roots Party,” features another collection of uplifting roots reggae.

“We need more unity while races are running,” Jacobi sings on the title track. “Illusions and reality are constantly warring, Break from society, your higher self’s calling, Get some meditation in this roots mon party.”

Headlining Saturday’s reggae festival, Tribal Seeds will be joined by Matisyahu and Groundation.

With help from Jamaican legends Sly Dunbar and Robbie Shakespeare, he next released the adventurous work “Light.” Then in 2014, Matisyahu released the brilliant album “Akeda,” which marked another significant evolution, and a new creative peak. 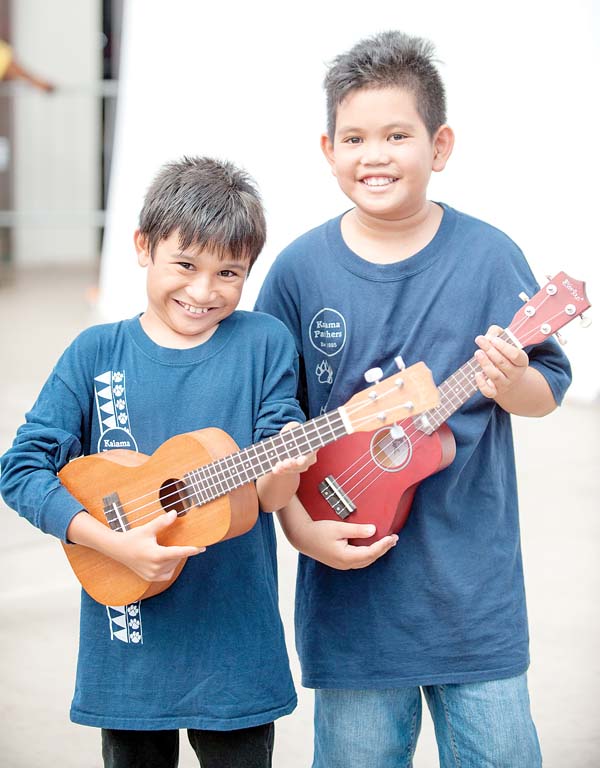 Ukulele players of all ages and abilities are encouraged to attend and participate. Photo courtesy the MACC

Based on jams with his band mates (the song “Driftin’ “ runs 14 minutes), his latest album “Undercurrent” was praised by American Songwriter as glowing, “with the musical freedom, lyrical wisdom, vigor and positivity of Matisyahu’s live shows.”

Melding influences of jazz and funk onto their roots foundation, Groundation takes their name from a Rastafarian holy day (Grounation). Formed in California in 1998 by three students in Sonoma State University’s jazz studies program, over the years, they’ve expanded to a nine-piece ensemble with a horn section.

Their most recent album, “The Next Generation,” opened with an instrumental track that sounded like Chicago playing reggae.

“Featuring musicians from both Jamaica and their home state, California, the 11 tracks expand the range of the band into dub, reggae and jazz and together provide an original take on contemporary roots music,” praised Reggae Music UK.

Tribal Seeds headlines the Republik Music Festival Maui on Saturday at the A&B Amphitheater at Maui Arts & Cultural Center in Kahului on a bill with Matisyahu and Groundation. Steel Pulse headlines the Festival on Friday with the Original Wailers and Trevor Hall. Gates open at 5 p.m. for both shows. Tickets are $39.50 and $79.50 for VIP each night (plus applicable fees). There is a $10 discount if purchasing both nights at the same time. Prices increase $5.50 day-of-show. Parking is available for pre-purchase via the MACC box office. VIP tickets include premium viewing/standing-only area front-of-stage, access to the Yokouchi Pavilion Courtyard with designated bars and restrooms, and seating area with tables and chairs. VIP ticket-holders must be 21 and over. Call 242-7469 or visit www.mauiarts.org for tickets and information.

Renowned ukulele advocate and teacher, Roy Sakuma, will serve as emcee. Besides the exceptional music, ukulele will be featured as door prizes and the event includes displays of made-in-Hawaii arts and crafts. Gates open at 12:30 p.m. and the festival runs until 6 p.m.

In conjunction with the festival, a free ukulele workshop with Roy Sakuma will be offered in McCoy Studio Theater from 10 until 11:15 p.m. Saturday. The workshop is geared for all ages, child to adult and beginning to intermediate players.

Students must be able hold C, F, G7 chords and bring their own ukulele, notepaper and pencil. Attendees will participate in Sunday’s ukulele festival with a song learned in the workshop, and someone will win a new ukulele. No reservation is required. Registration starts at 9 a.m.

“I was so happy to have been part of this great track,” says Hutch.

“We’re going to do a few shows out on the East Coast,” says Lukas. “That will be really fun.”

The Vince Esquire Band with Josh Greenbaum and Jason Ganis performs at the Wailuku Coffee Attic at 7 p.m. Saturday. Tickets are $20 general admission and $30 for cushion couches and chairs. Call 250-9555 to reserve seats.

The original HAPA will play their sixth consecutive show at 7:30 p.m. Sunday in the MACC’s McCoy Studio Theater. Due to overwhelming demand, Barry Flanagan and Keli’i Kaneali’i will once again entertain with beloved classics and maybe some new songs from their forthcoming album. Tickets are $35, $45, and $65 (plus applicable fees).

Sara Polanco launched the Central Maui location after explosive success selling her empanadas from her home in Hana. Photos by TOM BLACKBURN-RODRIGUEZ

Caribbean-inspired dishes are the hallmark of The Empanada Lady, now open in Wailuku.

Members and founders of Steel Pulse, who headlines the two-day Republic Music Festival Maui on Friday at the MACC, Patrick Niddrie photo.

Paula Fuga is among the performers who will be on stage during the Maui ‘Ukulele Festival on Sunday. Photo courtesy the MACC

Ukuleles and all things ukulele are the focus of the festival. Photo courtesy the MACC

Ukulele players of all ages and abilities are encouraged to attend and participate. Photo courtesy the MACC

Jefferson Davis (left) and Geronimo Son contemplate the ultimate sin — murder — in “Strangers on a Train,” concluding its run this weekend at ProArts Playhouse in Kihei. Call 463-6550 or visit www.proartsmaui.com for tickets. PETER SWANZY photo

Halloween is a happening time at the popular Lahaina hangout.