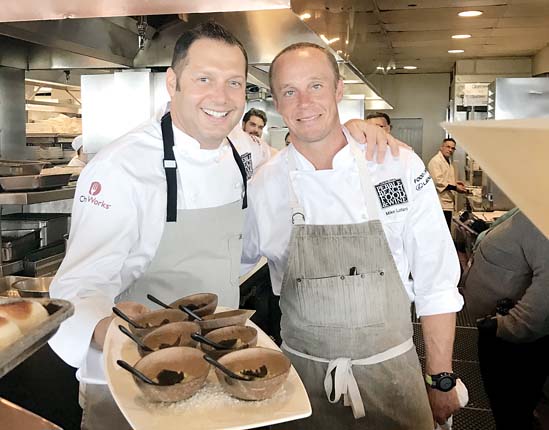 The aloha spirit will once more be at the forefront of Pebble Beach Food & Wine, renowned as “one of the West Coast’s premier epicurean lifestyle events.”

Held on the Monterey Peninsula of California April 11 to 14, it coincides with Pebble Beach Resort’s year-long centennial. PBFW features 100 of the world’s top celebrity chefs and 250 acclaimed winemakers who will dazzle in the middle of John Steinbeck country’s spectacular central California coastline.

Wailea chefs are invited to appear again along with the creme de la creme of the food and wine world at some of the most original dining experiences on the planet.

Joining legends such as Jeremiah Tower, dubbed “the last magnificent,” Masaharu Morimoto, Dean Fearing and many more will be the chefs from Grand Wailea, A Waldorf Astoria Resort, Sheldon Simeon of Lineage at The Shops at Wailea and Roy Yamaguchi of Humble Market Kitchin in Wailea. 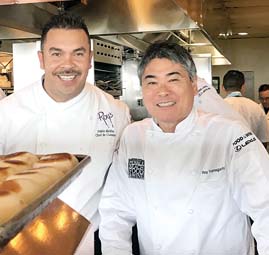 “I always get very excited when I have a chance to showcase this place we are all lucky enough to call home,” enthuses Mike Lofaro, Grand Wailea executive sous chef.

“I feel it is my responsibility to portray a message of how special Hawaii really is and the core values of Hawaii to my understanding. The future of food here, in my opinion, is really just deepening the connection to this place. For me, it’s about cooking food that feels right and is in harmony with this place, what the environment inspires me to cook as opposed to what I might want or crave at the moment. It’s about honing in on your specific place and the rhythms of it. In essence, the ways of the past.”

Lofaro will first appear April 12 with the Grand Wailea Hawaiian Cultural Ambassador Kainoa Horcajo at the Future of Hawaiian Cuisine Power Lunch held at Yamaguchi’s Roy’s at Pebble Beach restaurant at the Inn at Spanish Bay. For the uninitiated, Yamaguchi is a James Beard Award-winning chef, one of only three in Hawaii, and he owns many restaurants far and wide. Simeon of “Top Chef” fame will also appear. His Lineage, was recently nominated as a semi-finalist for Best New Restaurant in America by noted James Beard Foundation panelists.

“It seems that with the explosion of the culinary scene, from TV shows galore and more celebrity chefs every day, regional cuisines around the world are getting reinvented and reimagined,” says Horcajo, who will be co-emcee at the Future of Hawaiian Cuisine along with Maui Sommelier Yeshua Goodman.

Horcajo knows all about culinary TV shows. He co-starred with Lofaro in “Search Hawaii: Where Food Meets Culture,” which won an Emmy Award. 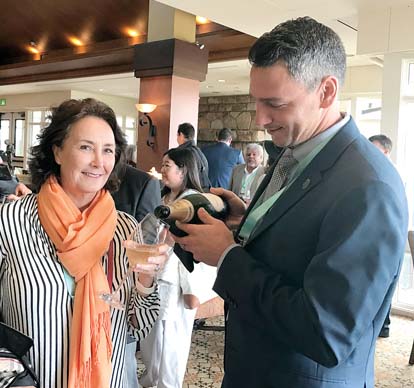 “The future of Hawaiian cuisine lies in its past in two foundational elements: place and people,” Hocajo explains. “The land itself guides our current group of chefs into the ingredients they use and the flavors they bring out. The group of chefs here in and from the islands is a microcosm of larger migrations of people to Hawaii, starting with indigenous Kanaka Maoli to the first Western arrivals and through the plantation era and beyond. Each brought elements of their home flavors and combined them with the terroir of these islands. Now, I see we are getting even more specific and place-based.”

The Future of Hawaiian Cuisine will let hungry Mainlanders take a day trip to Maui without ever leaving California.

“For this event, the really special thing is each of these chefs has a restaurant within the same ahupua’a (Hawaiian for land pie from mountain to ocean),” says Horcajo. “Chef Roy at Humble Market Kitchin, Sheldon at Lineage and Mike at the Grand Wailea are all based within the ahupua’a of Paeahu in the moku of Honua’ula on the island of Maui. This was a foundation for this special lunch, to dive into what that means for each of them.”

“My role in this Hawaiian power lunch is to serve as a co-emcee alongside another Maui boy, Yeshua Goodman, also the sommelier for this event, selecting perfect wine pairings to complement each dish. In addition, I get to work with the chefs and the PBFW design team to touch every sense, from Hawaiian music to decor, and share our love of this aina with all in attendance,” adds Horcajo.

Yes, the Future of Hawaiian Cuisine will be all about the moku, or island, of Maui and the ahupua’a that encompasses Wailea. 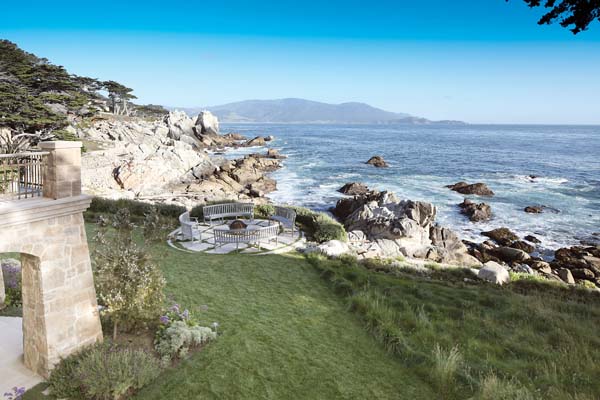 “We will be focusing on our moku and ahupua’a that we work in at both the Future of Hawaiian Cuisine luncheon and the Grand Tasting on Sunday,” says Lofaro. “For the lunch we will be doing a he’e (octopus) dish with limu (seaweed).”

“Pebble Beach is a great chef and winemaker event to attend, and it’s a nice time to mingle and see who’s out,” explains Yamaguchi. “We are happy to have both Michael Lofaro and Kainoa Horcajo come back this year. Sheldon Simeon is also a superstar. It will be great. It’s a team effort.”

“I have to say this lunch with Chef Roy is just an amazing experience. Besides Chef being one of the nicest people on earth, all of his staff are engaged in the event and the inspiration behind all the food,” says Lofaro. “There is so much aloha in that room from everyone, it really is beautiful. It seems everyone either from Hawaii or with some kind of Hawaii connection attends this luncheon to find that feeling of home and connection with each other, it’s amazing to say the least.”

“I’m truly honored to be a part of the prestigious Pebble Beach Food & Wine festival,” says Simeon. “Chef Roy has paved the way for up-and-coming chefs like Chef Mike and myself. I don’t like to think of it as a ‘passing’ of the torch of Hawaii cuisine, but more as a lighting of ours.”

The two-time “Top Chef” finalist and Fan Favorite, Simeon also says that his big takeaway from his conversation with Chef Roy is that he wants everyone to shine and do what he does best. 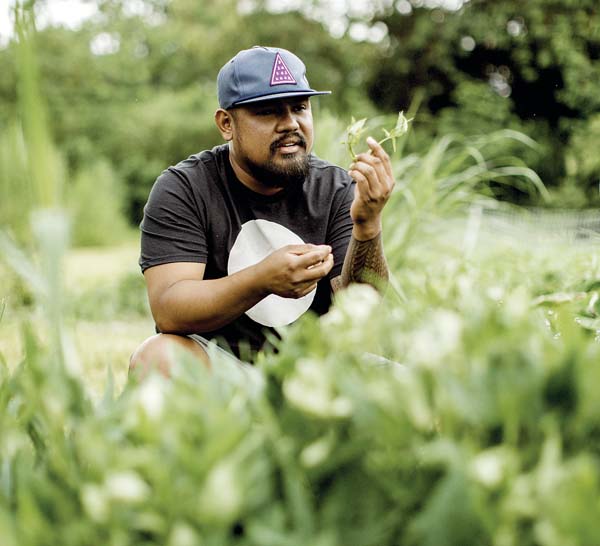 Sheldon Simeon of Lineage in Wailea will impress this year. -- CARLA TRACY photo

“Chef Roy is not putting many restrictions or guidelines in place. We are busy working on menu items, and I will definitely be featuring duck,” adds Simeon.

Besides appearing at Roy’s during the festival, these chefs will cook at Lexus Grand Tasting from noon to 3 p.m. April 14.

“The Lexus Grand Tastings are among the weekend’s most spectacular events with more than 300 wines from world-renowned producers to the ‘who’s who’ list of 30 top celebrity chefs all featuring exclusive tastes of their best dishes,” says David Bernahl, event founder and CEO of Coastal Luxury Management that produces the event.

“For the Grand Tasting, we will be doing a play on the eat your invasives concept we did last year,” says Lofaro, who is going on his third appearance at PBFW. “But we’re doing it this year with invasives located within our specific moku — axis deer and monkeypod (as in trees).”

“The logistics to send a whole bunch of product to California to feed almost 2,000 people is never a dull task. In addition to the food, we do all of our own decor for the Grand Tasting event. To give you an idea of what this entails . . . last year we shipped a chainsaw to the venue to build a hale inside a 5,000-square-foot tent! It’s a good time, to say the least.” 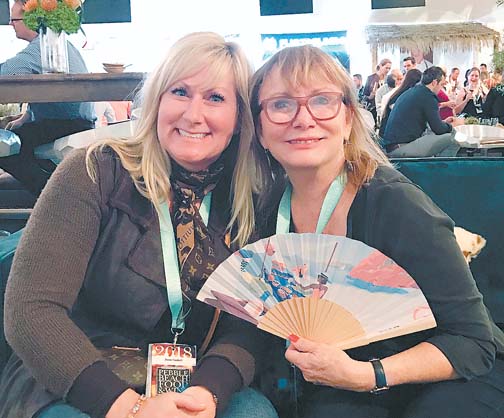 Kosta Browne Winery of Sonoma did a dinner at Grand Wailea in 2018 and then invited the chefs to cook in California in January. Winemaker Nico Cueva will be featured at a PBFW seminar.

“We are thrilled to be pouring Kosta Browne again this year at Pebble Beach Food and Wine alongside great friend, Chef Mike Lofaro, and his team from the Grand Wailea,” Cueva emails The Maui News. “Over the past year it has been an honor to work with Chef Mike on our ‘Shore to Shore’ mini-documentary that took us from the shores of Maui to the Sonoma Coast. The film captured our journey of foraging ingredients, sustainable winegrowing, and trying to leave each place a little better than the way we found it. Looking forward to more killer food and wine back in Maui this summer at ‘Fire it Up’ (three-day festival July 19 to 21 at Grand Wailea)– until then, eat well and drink pinot,” says Cueva.

“Jorge is great and doing well,” emails the famous Father of Southwestern Cuisine, who will appear at PBFW and at the Hawaii Food & Wine Festival in October.

“Pebble Beach is a great event in the most beautiful setting! The food is outstanding from great chefs from all over and the wines are over the top. It’s a special time for me to catch up with old chef friends,” adds Fearing.

PBFW founder Bernahl also feels the Hawaii/California connection at what he pegs as a “prodigal event.”

“We’ve seen the connection for years. Some of the best chefs have been involved for a decade,” he emails.

“We have so many great clients that come out from Hawaii every year. It’s really such great synergy. Texas, too. We’ve had some celeb chefs from Texas.”

Pebble Beach Food & Wine still has tickets available and there are four package options to make it easier on the pocketbook, if you would like to attend multiple events over the four-day festival.

“Pebble Beach is truly such a stunningly gorgeous place, there’s so much great talent — and it’s a whirlwind of food, wine and fun,” concludes Bernahl.

* Dining Editor Carla Tracy can be reached at carlatracy@mauinews.com.

• What: The 12th annual Pebble Beach Food & Wine will transpire April 11 to 14 near Monterey, Calif. with venues spread throughout various locations. 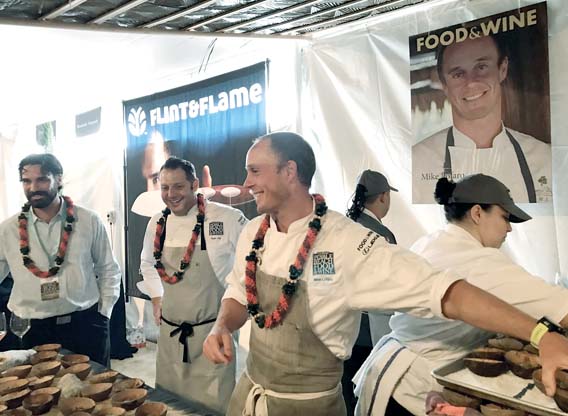 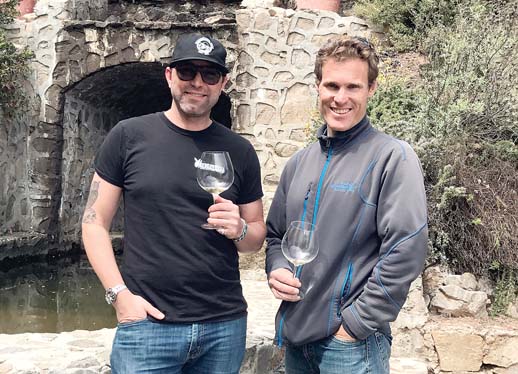 Kosta Browne Winemaker Nico Cueva (left) and Pisoni Vineyards third-generation family farmer Mark Pisoni in front of the wine cave at the Santa Lucia Highlands property that is about an hour east of Pebble Beach in the heart of John Steinbeck country. Cueva will appear at the Kosta Browne Obsessed with Pinot Noir seminar April 13. -- CARLA TRACY photo