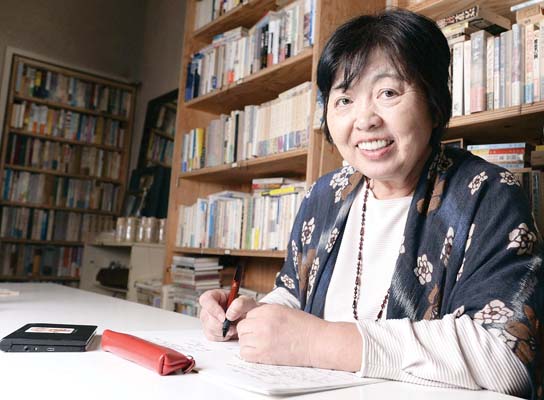 The works receiving one of Japan’s most coveted literary awards, the Naoki Prize, have something new in common: For the first time in 85 years, all six of the nominated authors are women.

Japan is home to what many consider the world’s first novel, “The Tale of Genji,” written in the 11th century by noblewoman Murasaki Shikibu. Its modern fiction has been defined mostly by long-established male writers such as past Nobel laureates Kenzaburo Oe and Yasunari Kawabata. And for decades it has been dominated by Haruki Murakami, whose surreal blend of magical realism and pop culture has made him an international bestseller.

But Japanese literature is beginning to look different as new voices, including young writers, women and the elderly, receive domestic and international recognition.

Two women, Natsuko Imamura and Masumi Oshima, were recently presented with the Akutagawa and Naoki prizes. Since 1935 the Akutagawa and Naoki have recognized serious and popular fiction, respectively, and provided their winners with a commemorative watch and 1 million yen (a little under $10,000). Even more valuable is the prestige its winners receive from media attention and, increasingly, a clear path to wider audiences through translation.

Consider, for instance, the 2016 rise of “Convenience Store Woman.” Writer Sayaka Murata’s novel inspired by her own jobs has sold more than 600,000 copies in Japan since it won the Akutagawa Prize that year. Murata, then 36, and still working part-time at a convenience store, shared the stage with actress Naomi Watanabe, known as “the Japanese Beyonce,” as one of Vogue Japan’s “Women of the Year.” Two years later, the English translation of Murata’s novel was an editor’s best-of-the-year choice by the New Yorker, the magazine that helped catapult Murakami to stardom. 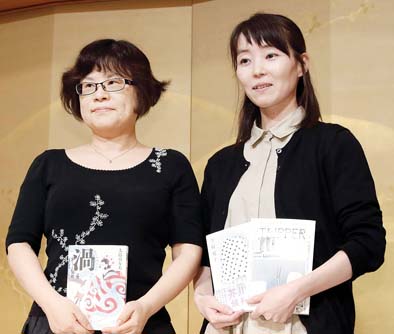 Natsuko Imamura (right) and Masumi Oshima pose with their books after Imamura and Oshima were awarded the Akutagawa and Naoki Prizes at a Tokyo hotel. -- Kenichiro Kojima/Kyodo News via AP

“International markets grow when talent emerges,” said John Freeman, who published work from Murata and Murakami as editor of the anthology “Freeman’s.” ”In the past two and a half decades, there’s been an explosion of good writing coming from Japan. … That wave is cresting now with writers just barely 40 years old.”

Publishers in the United States and Britain are seeing a growing audience for novels in translation, experts say. Translations of half a dozen prize-winning works by female authors from Japan were published last year in the United States, with Yoko Tawada’s “The Emissary” taking a 2018 National Book Award for translated work.

“The number of new voices that have been made available to Anglophone readers over the last few years has been encouraging,” said David Karashima, a professor at Waseda University who has translated Akutagawa-winning fiction.

Karashima said there are still not as many women published in Japan as men, but this may be changing, in part because there are more women on selection committees for literary prizes. He added that translated Japanese fiction is itself going through a “mini-boom.”

“Outside of Japan, over the last five years or so, there seems to be a great thirst for fiction by Japanese women writers,” Karashima said.

And there’s evidence of a demand in Japan for stories that look different from those mostly produced by men in the past. The latest Akutagawa and Naoki winners are bestsellers this summer. A recent issue of “Bungei” literary magazine on “South Korea, Feminism and Japan” required two reprints, a first in more than 80 years.

Erika Tsugawa, a U.S.-based translator who runs the blog Tsundoku Reader, said she has also noticed a wave of new writers entering the field in middle age or after unrelated careers. She recalled a computer programmer who “used anger to fuel her novel writing” about the injustice she received while raising her two children. Another writer, Chisako Wakatake, 63, won the Akutagawa in 2017 for “I’ll Live by Myself,” a story about a 74-year-old widow adjusting to life alone. She began writing full time at 55.

Fans hope that the popularity of new voices will lead to appreciation of diversity in expression and identity in a society that’s often stereotyped, even within Japan, as a monolith. Tsugawa said that publishers haven’t helped by favoring for translation “very ethereal and very quirky” novels associated with the style of Murakami.

“It was a revelation when I could read Japanese novels and there was all this stuff out there,” Tsugawa said. “There’s freshness there that doesn’t make the bestselling list.”