5 ways the right lighting can elevate your home

When you shop for a new sofa or another piece of furniture, it’s not hard to envision how it might look in your living room. And if you’re considering a new wall color, you can test pretty simply with swatches.

But shopping for lighting can be more complicated.

It’s easy fall in love with the design of a light fixture or lamp, notes interior designer Maggie Griffin, but how will it illuminate your space? How will it work with the lighting you already have? And which variety of light bulb will provide the kind of light you need? 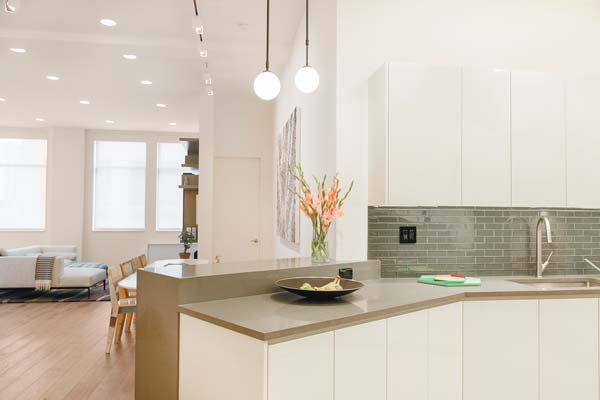 Although many people worry about having enough light, the biggest challenge is usually avoiding glare, says Bunsa. Many houses have can lights in the ceiling which flood a room with light. Make sure those are on a dimmer, and then add other fixtures and lamps that offer a softer glow.

Rather than choosing a fixture that functions like a spotlight, Bunsa says, “I always try to shop for things that are more like glowing globes that are a little bit warmer.”

“Lighting can make you uncomfortable if it’s too bright,” she says.

Griffin agrees: For a more appealing effect, she says, you might choose a fixture with several bulbs that give off softer light, rather than just one very bright bulb.

And when choosing bulbs, consider their color temperature. 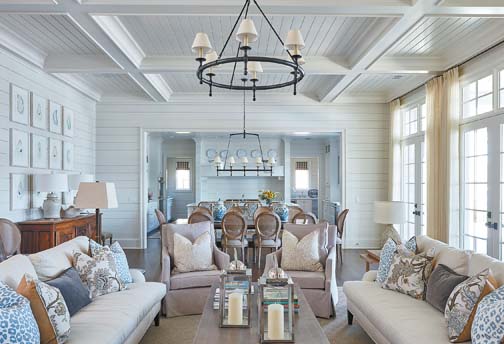 “It makes a space feel a lot warmer if you go with the warmer color temperature.”

Lighting can draw attention to your art or furnishings, says Griffin, and create a strategic pool of light in one part of a room.

For a client in Atlanta, she added sconces to the sides of kitchen cabinets to give light both practical and beautiful around the kitchen sink. She also suggests hard-wiring some light fixtures into bookcases to showcase items on the shelves and bring an extra glow.

Murray takes the same approach, using sconces to frame certain areas in a room and bring a bit of intimacy to parts of a large room.

DON’T HANG IT TOO HIGH

Griffin says people usually err on the side of hanging lights too high, rather than too low.

Sometimes in a living room that has a high ceiling, “there’s this big, great-looking chandelier,” she says, but “it’s hung so high you wonder, ‘What does it actually illuminate?'”

Bunsa says this is especially important around dining tables and kitchen islands: “If it’s a space where you’re going to be sitting and having a conversation,” she says, “make sure people’s faces are lit” rather than having light looming above them.”

How does your home’s lighting appear to those approaching your front door?

Although many people focus on privacy and might add plantation shutters or blinds to front windows, it’s important to step outside and consider the effect, says Griffin.

Try placing a table near a front window, she suggests, and put a lamp on it that gives a warm glow easily seen from outside.

INJECT A CHANGE OF STYLE

Using a mix of vintage and modern light fixtures and lamps can make a room more appealing and shake up its style, Murray says.

A vintage lamp or fixture “adds character and soul and makes it feel not so cookie-cutter,” she says, and rewiring an old piece is more environmentally sustainable than buying new.

Griffin agrees: “Don’t get hung up on matching your lights,” she says, “especially if you’re doing a renovation or new build.”

A blend of styles, she says, “is more interesting than the way they used to do it, where they picked out the matching set.”

Experimenting with a range of styles “gives you a chance to let your personality shine through.”