The inimitable Paris bistro is a step back in time 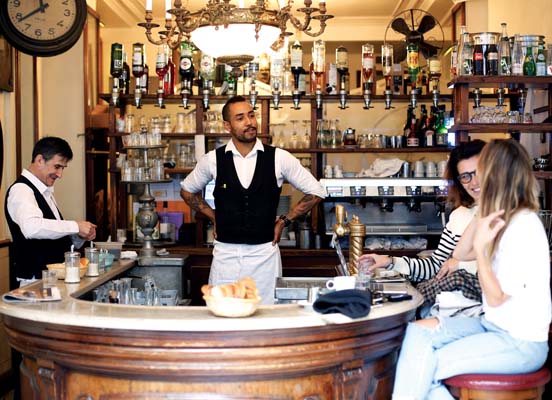 Waiters Jean Baptiste Magnique (center) and Didier Hubert talk with customers of the cafe “Au petit Fer a Cheval” (The small horseshoe), in the historical Marais district of Paris on Thursday. Stepping into the over a century-old Le Petit Fer a Cheval bistro café-restaurant, named after it’s horseshoe-shaped bar, is like traveling back in time. -- AP photo

PARIS — Stepping into the Petit Fer a Cheval bistro is like traveling back in time.

The classic Paris watering-hole’s old phone wouldn’t have looked out of place in the hands of Edith Piaf. The signage could have been the backdrop for a Maurice Chevalier movie. History seems to seep out of the walls. It even has an old tap, like today’s beer taps, that used to serve absinthe, which was one of painter Vincent Van Gogh’s tipples.

Over a century old, the cafe-restaurant in the historic Marais district of Paris has a horseshoe-shaped bar, hence its name: The Little Horseshoe.

Behind it, barman Didier Hubert bustles, serving drinks and company to the bar’s loyal clientele. He says the job is a bit like being a social worker “in this brutal town.”

“At school, we were told that you don’t travel much in this job. But listening to our clients’ stories is like taking a trip,” he says. 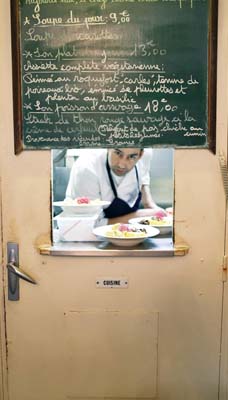 Chef Philippe looks through the window of the kitchen of the cafe “Au petit Fer a Cheval” in Paris on Thursday. -- AP photo

Clients come from near and far.

The most famous regular is Tim Roth. Hubert says the “Reservoir Dogs” actor drops in about three times a year with his family and once had director Quentin Tarantino and “Escape from New York” star Kurt Russell in tow.

The bistro’s old-school charm and authenticity increasingly make it an anachronism in the Marais district changed by gentrification, an influx of chain stores and mass tourism.

“We get a lot of Korean visitors. They always order the same thing, either veal filet mignon or confit duck,” Hubert says.

When gunmen sprayed Paris nightspots with bullets in terror attacks on Nov. 13, 2015, that killed 130 people, a Portland couple emailed Hubert to ask if he was safe.

An Italian couple who hit it off with Hubert later sent him a Christmas parcel to the cafe. It contained a letter, a photo of the couple and a vinyl record by Italian singer Rita Pavone. Hubert had told the couple that he’d listened to her as a kid.

The man later came back, but this time accompanied by a different woman.

They sat outside, not inside at the bar as the man used to with his previous partner.