Efforts to eradicate invasive pests on Lanai are paying off 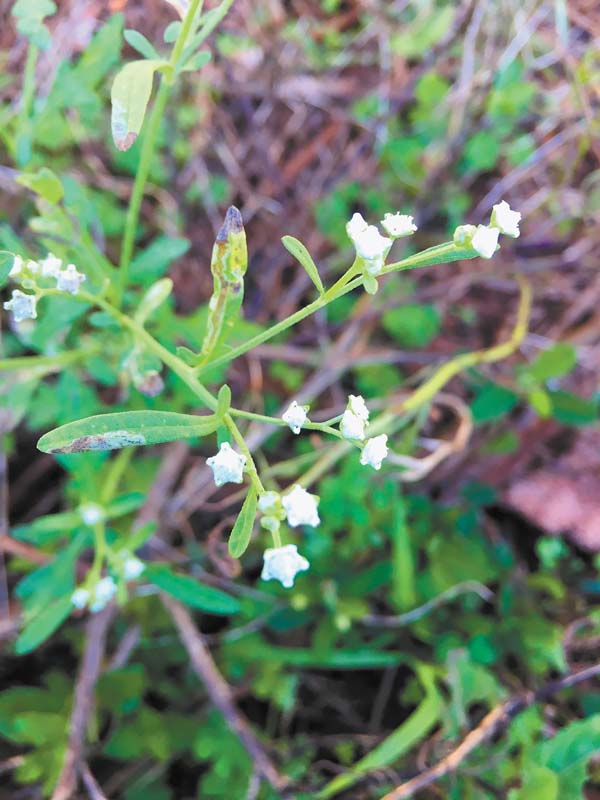 Parthenium is a common widespread weed on Maui, but it has nearly been eradicated from Lanai thanks to the long-term efforts of Pulama Lana‘i. Parthenium is extremely invasive, taking over cropland and pasture, poisoning cattle, and triggering hay fever in people. Pulama Lana‘i photo

If you travel between the Hawaiian Islands you know that each island is unique in traditions, food, expressions and customs. Plants and animals vary too — both the native plants and animals as well as the invasive species that plague each island. Mongoose are not established on Lanai or Kauai. Miconia has never been found on Molokai. These differences reflect where pest species were introduced as well as the efforts to stop them.

On Lanai, Kari Bogner, botany program manager with the Pulama Lana’i conservation department, is tackling the eradication efforts of a half-dozen invasive plants that have been declared as lost causes on other Hawaiian Islands — among them are parthenium, a weedy herb in the aster family; fountain grass, a fire-adapted grass from South America; and ivy-gourd, an invasive vine in the cucumber family.

“I’m optimistic,” she says, “we’re making a lot of headway with these species.”

Eradicating a plant taxes the perseverance of even the most dedicated. Pulling, cutting and digging is instantly gratifying, but returning week after week, month after month, searching for seedlings and waiting for the seed bank to be exhausted takes a toll on patience and budgets. The effort is essential — if a plant is missed and goes to seed, it starts the whole process all over again. If those seeds are spread unnoticed, the setback is even greater.

In March 2015, Maui-based botanist Hank Oppenheimer noticed a familiar weed outside Lanai City. It was the first time he had seen the pasture weed Parthenium hysterophorus (False ragweed) on Lanai, but knew from his experience on Maui how invasive it was. Parthenium is native to the southern United States and Mexico. It is listed as one of the 100 worst invasive weeds in the world by the International Union for Conservation of Nature. Tiny seeds are carried unnoticed as people move cargo, animals, and soil long distances. Consequently, the pest has invaded 45 countries. 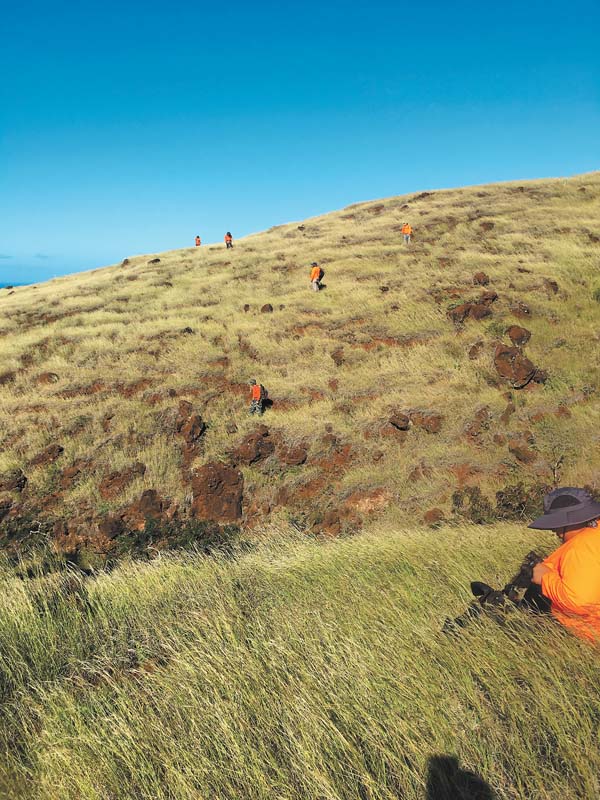 A crew from the Conservation Department of Pulama Lana‘i scour the grassy slopes searching for a particular grass — the fire-promoting fountain grass. This invasive bunchgrass could be eliminated from Lanai entirely. Pulama Lana‘i photo

Parthenium takes over cropland and pasture, causing losses in the millions in Australia alone. The plant can inhibit germination of other species — a survival strategy called allelopathy. This super-weed is not only poisonous to other plants — if it has invaded pasture, animals can be poisoned. Incidences of hay fever in humans also increase once parthenium invades.

On Maui, parthenium is too widespread to eradicate, but on Lanai, the pest is only known in one location. A five-person Pulama Lana’i crew removed the plant from 6 acres. The weed can produce seed within Bogner and Jerome Sunio, biosecurity tech with Pulama Lana’i, return to check the site every 10-12 days to stay ahead of the seed cycle. She hopes to exhaust the seed bank soon — not a small task given that a single plant can produce 15,000 seeds. She has not found a seeding plant since April 2018.

Fountain grass also is conspicuously absent on the island and not by accident. The invasive bunchgrass is widespread on the Kona side of Hawaii island, covering acres of lava and fueling wildfires that destroy native dryland forest and threaten homes. But on Lanai, there are only a handful of places fountain grass has been found; crews from the Maui Invasive Species Committee (MISC) spent years seeking out and removing the ecosystem-modifying weed, and now Bogner scours the last known site every two months looking for seedlings. This weed is also a MISC target for eradication on Maui and is not known from Molokai.

Ivy gourd is yet another Lanai success story. The drought-tolerant vine from Southeast Asia threatens dryland forest and coastlines. The vine is beyond containment efforts on Hawaii island and Oahu. MISC controls it on Maui; it is not known to be on Molokai. On Lanai, MISC found the fast-growing climber in a greenhouse and seeds were inadvertently spread in potting soil throughout the Manele area. After battling the climbing vine in bougainvillea and other plants, Bogner’s efforts to eliminate it are proving fruitful — or rather an absence of fruit — she hasn’t found a seeding plant since last year.

You can help. If you’re on Lanai, contact Bogner and Pulama Lana’i at (808) 565-3683 if you see parthenium, fountain grass, ivy gourd or anything new and unusual. If you travel back and forth, make sure your gear is clean and free of weed seeds and dirt that could spread pests interisland.

* Lissa Strohecker is the public relations and education specialist for the Maui Invasive Species Committee. She holds a biological sciences degree from Montana State University. Kia’i Moku, “Guarding the Island,” is prepared by the Maui Invasive Species Committee to provide information on protecting the islands from invasive plants and animals that can threaten the island’s environment, economy and quality of life.