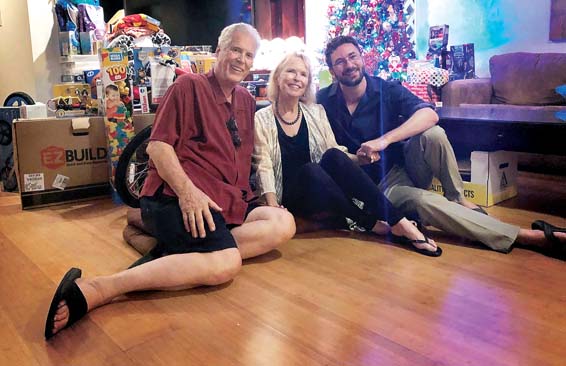 Year after year, Bob (from left), Donna and Clint Hansen collect Christmas gifts for the Friends of the Children’s Justice Center of Maui, a nonprofit that helps children recover from the damaging effects of abuse and neglect. -- Photo courtesy of Donna Hansen

Lots of families have holiday traditions. Some decorate the tree together. Others build gingerbread houses or pose for photos in matching sweaters.

Bob and Donna Hansen and their sons, Clint, Hans and Daryl, have one, too. For nearly three decades, they have brought Christmas cheer to kids who need it most by collecting gifts for the Friends of the Children’s Justice Center of Maui.

It all began when Donna invited several friends to a pre-holiday luncheon at her home 26 years ago. There was an ulterior motive: Donna had recently learned about the Friends of the Children’s Justice Center of Maui and was determined to help in some way. So, she instructed each guest to bring a new, unwrapped toy — one that reawakened a childhood Christmas memory — for the nonprofit. After lunch, they took turns explaining the significance of their gift and how it would brighten the world of the child who received it.

“It was very special,” Donna recalled. “It opened our hearts.”

Inspired by the experience, she and Bob decided to throw a Christmas party at their home the following year. The price of admission? A gift for the Friends of the Children’s Justice Center of Maui. The party-slash-toy drive was so successful that they decided to do it again the next year. And every year after that. 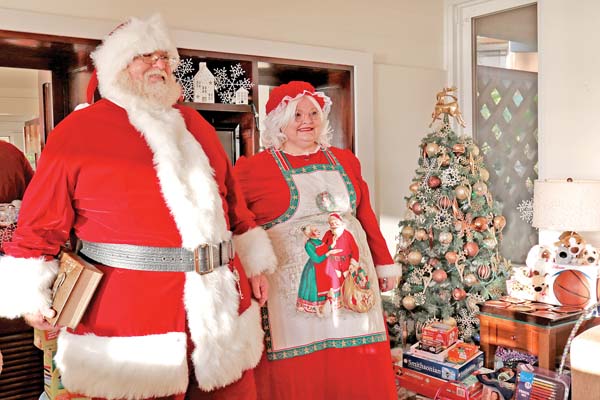 The family’s annual toy drive culminates with a private party in mid-December. And yes, Santa and Mrs. Claus are always on the guest list. -- Photo courtesy of Donna Hansen

If you ask the Hansens how many toys they’ve rounded up since then, they can only shrug. They haven’t kept track, but the family has collected thousands. (Last year alone, they netted $22,000 worth of toys, gift cards and cash donations for the nonprofit.)

“We are very passionate about this,” Donna said. “When you see the sparkle in a child’s eyes, you know it is the right thing to do.”

Hawaii’s Children’s Justice Centers are programs of the state Judiciary and were established by the state Legislature in 1986 to ensure a fair and neutral process for the handling of reports of child abuse. Today, there are five centers statewide: West Hawaii, East Hawaii, Oahu, Kauai and Maui (the Maui center also serves children living on Molokai and Lanai who are flown in for interviews and medical examinations).

Each center is designed to make children feel safe and comfortable while being interviewed about reports of child abuse, particularly sexual abuse, and as witnesses to crimes. On average, the state’s Children’s Justice Centers see approximately 1,000 children every year, and many of them arrive with no more than the clothes on their backs.

And for many of them, it may be the only gift they will receive.

“Every Christmas, part of the Friends mission is to ensure that every child in need receives a gift for the holidays. . . . We cannot do this without the support of our Maui community members,” said Paul Tonnessen, executive director of the Friends of the Children’s Justice Center of Maui. “Each year, the Hansen ohana goes above and beyond to support this worthy cause. They have not only touched the lives of thousands of our keiki, but more importantly, they also show them that there is a caring and loving community out there for them.”

The Hansens stockpile gifts, gift cards and cash donations throughout the year. The toy drive kicks into high gear after Thanksgiving and ends with the annual private party at the family’s home in mid-December (however, they will continue to accept donations through Dec. 24).

The family says they are forever grateful to those who support the toy drive every year.

“There are a lot of beautiful people who contribute to this important event,” Donna said. “One of the many is the outstanding support given by the Jackson Rancheria Band of Miwuk Indians, who have donated thousands of dollars to help children in Maui County.”

The Hansens encourage others to support the Friends of the Children’s Justice Center of Maui in any way they can.

“You will give a child hope . . . and let them know that someone cares, and they are not alone,” Donna said. “Our children are our future. Give them a chance with whatever you can.”

Want to make a difference this holiday season? Bring a new, unwrapped gift for a child of any age — from infants to toddlers to tweens to teens — or a gift card or check (made out to the “Friends of the Children’s Justice Center of Maui”) to the Hansens’ office in the Wailea Town Center, 161 Wailea Ike Place, Suite A-106, or call them at 874-8473 to schedule a pickup. There are also donation boxes stationed at participating Bank of Hawaii branches.

To learn more about the Friends of the Children’s Justice Center of Maui, visit www.mauicjc.org or call 986-8634.