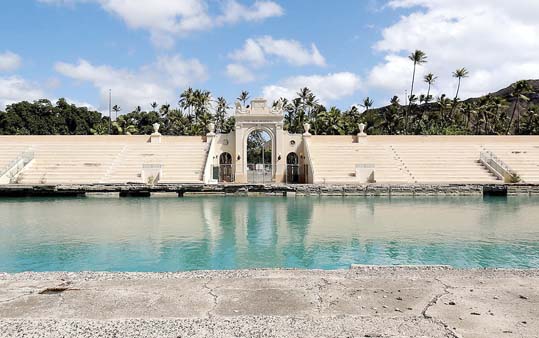 The city designated the “perimeter deck” plan as a preferred option for the Waikiki War Memorial Natatorium in a final environmental impact statement, The Honolulu Star-Advertiser reported Sunday.

The facility opened in 1927 as a monument to Hawaii residents who served during World War I, but closed in 1979 due to disrepair.

The statement estimated the construction price for a new saltwater pool at $31.8 million, including management and engineering costs. Annual operational costs of $967,000 would cover maintenance, supplies and a staff of 15 personnel.

The city council must approve a special use permit and funding for the project. Honolulu Mayor Kirk Caldwell expects his administration will include money for planning and design in the fiscal year 2021 budget, but he gave no timetable for completion.

Funding remains an open question. A public-private partnership and nonprofit fundraising to develop or sustain Natatorium operations are options, according to the impact statement.

The saltwater pool’s capital cost is anticipated to be less than two other options.

Tearing down the bulk of the remaining structure and creating a “war memorial beach” is projected to cost $35.2 million, including a new parking area and replacement of the existing Ocean Safety and Lifeguard Services Division office. Annual operations and maintenance under the scenario are projected at $356,000.

Another option is restoring the Natatorium’s original closed-pool system, which is projected to cost $42.7 million with estimated annual operations and maintenance of $1.13 million.

Caldwell said he prefers the memorial beach option because of the city’s need for beach space and because “I think saltwater swimming pools are a thing of the past.”