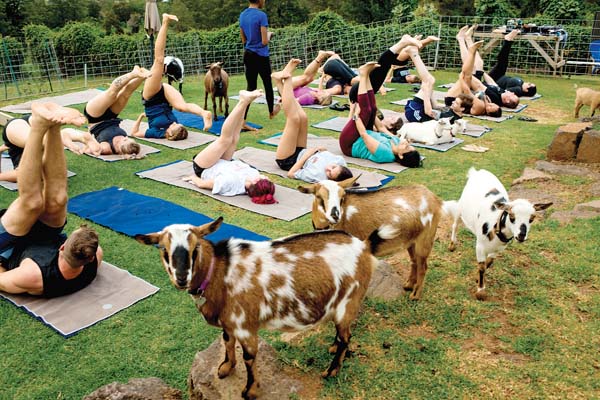 Yes, goat yoga is really a thing. And it’s not a baa-d way to spend a morning. -- ANGELA NELSON photo

At first glance, it might look like any other outdoor yoga class. There are colorful mats arranged in rows on the grass. Soothing music plays in the background. And a lithe-limbed instructor calls out poses in Sanskrit and English.

But there’s one notable difference. As the students maneuver through positions, nearly a dozen Nigerian dwarf goats playfully weave around their outstretched arms and legs — and occasionally scamper up their arched backs. Whether a student or spectator, it’s almost impossible to keep a straight face, which is sort of the point.

Yes, goat yoga is a thing. It began on an Oregon farm in 2016 and has steadily gained popularity, with classes cropping up nationwide. Even so, Hatchie still sees her share of raised eyebrows when she mentions goat yoga to the uninitiated. But she understands their skepticism.

“If you’d told me five years ago that I’d be doing this, I would have said ‘no way,’ “ she said with a laugh. 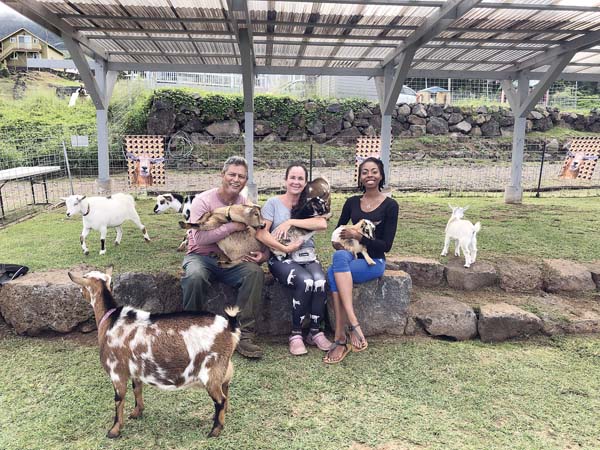 Hatchie and her husband, Andrew, moved from Los Angeles to Maui in 2014. The couple purchased their nearly 3-acre Kula farm with plans to grow lettuce, but after contending with layers of rocky soil, opted instead to try their hand at livestock. They started off with a gaggle of chickens and five baby goats they bought from local breeder Valerie Kulesa. Just as the Hatchies began to settle into the rhythm of farm life, a family friend sent them a link to a YouTube video showing people practicing yoga with miniature goats.

Hatchie says she was instantly captivated by the then-novel concept of goat yoga. And that’s when a plan began to take shape.

With the help and support of Kulesa and their neighbors, John Keanaaina and Carlton and Jade Long, the Hatchies debuted Maui Goat Yoga on Sept. 25, 2017, with one instructor, two students and five goats. Two years later, it has grown by leaps and bounds — literally and figuratively — with two instructors, 16 goats and multilevel Vinyasa yoga classes that tend to fill up quickly.

Yoga instructor Davida Moore has been with Maui Goat Yoga since day one. She says she answered the Hatchies’ help wanted ad not realizing she’d have a few four-legged co-workers. But after meeting the Hatchies (and the goats) and doing some research, Moore wanted to give it a try. Today, she says teaching sun salutation sequences and downward-facing dog poses in the company of goats has become second nature. 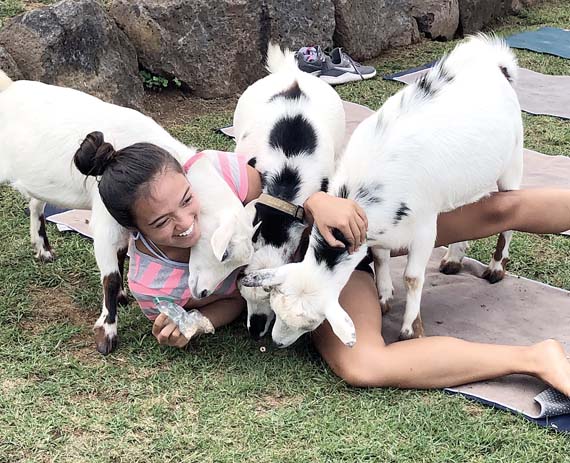 Don’t take it too seriously. Goat yoga (called “goga” in some circles) is meant to be a lively and lighthearted experience. -- SARAH RUPPENTHAL photo

For many of her students, especially the beginners, it’s all about the goats — yoga takes a backseat — but after a class, they often tell Moore: “Wow, that was a lot of fun . . . and I really like yoga.”

Yoga has plenty of physiological and psychological perks. Among other things, it can strengthen muscle, increase flexibility, improve sleep quality, lower blood pressure and reduce stress and anxiety. But what happens when you add goats to the equation?

Apart from inciting joy — and fits of laughter — goat yoga provides an opportunity to reconnect with nature. And there’s something undeniably appealing about goats. For one thing, they are full of personality and have an overall gentle demeanor. They might nibble on the edge of a yoga mat or your shirt sleeve, but they don’t bite (fun fact: goats have no upper teeth), and they are clean and virtually odorless.

And how does it feel to have a 20-pound baby goat perched on your back? Surprisingly good. “It’s a really nice massage,” Hatchie laughed.

Maui Goat Yoga is the first of its kind in Hawaii, and Hatchie predicts this fitness trend is here to stay. 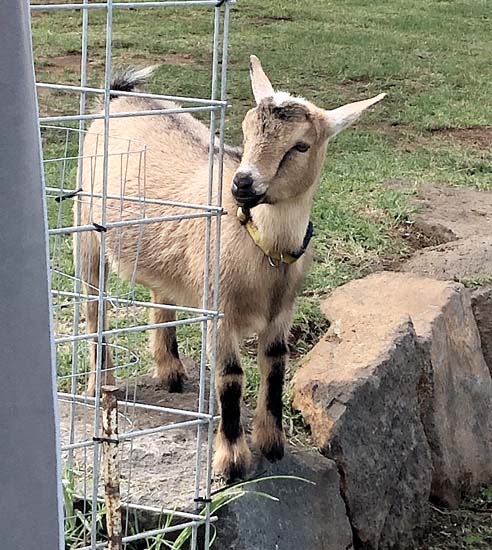 Tootsie is one of the friendly, four-legged yoga companions you can pose and play with at Maui Goat Yoga. -- SARAH RUPPENTHAL photo

Maui Goat Yoga offers classes to students of all experience levels at 9:30 a.m. Tuesdays through Saturdays, as well as seasonal sunset classes. If you’re not into yoga, you can attend a class and just hang out with the goats. Reservations are required at www.mauigoatyoga.com/classes

Hatchie suggests students wear farm animal-friendly workout clothes (remember, goats like to chew on things — and they poop, too) and bring sunscreen, a bottle of water and a camera to take some Instagram-worthy shots. Students can bring their own yoga mat or rent one for $5.