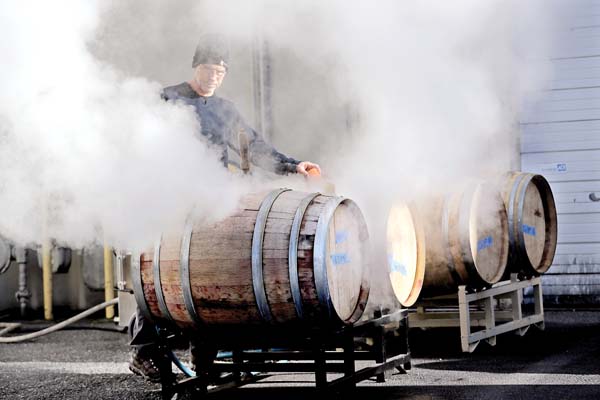 Cellar master Jim Hewitson applies steam to wine barrels last week to hydrate and seal them before wine is added at Patterson Cellars winery in Woodinville, Wash. Washington, which now boasts more than 1,000 wineries in the state, has become a force in the wine industry. The state is the second-largest producer of premium wines in the United States, trailing only California. -- AP photo

SPOKANE, Wash. — When Craig and Vicki Leuthold opened the Maryhill Winery in 2001, there were about 100 wineries in the state of Washington.

That number has since exploded to more than 1,000 wineries this year, and the remarkable growth is likely to continue.

Maryhill Winery, just south of the remote town of Goldendale, is part of that growth. It has recently opened tasting rooms in Spokane and Vancouver, Wash., and is in the process of opening a tasting room in the Seattle suburb of Woodinville.

Washington has become a force in the wine industry. The state has the nation’s second-highest number of wineries, after California. But California, which has around 3,700 wineries, remains much bigger than anyone else in the United States, selling more than $40 billion worth of wine in this country. 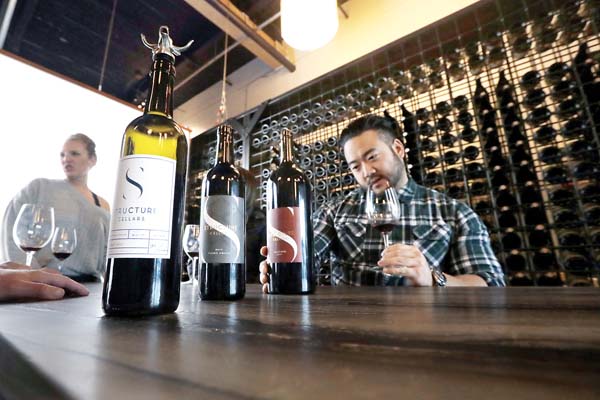 Mike Roh sniffs wine before tasting it last week at Structure Cellars wine tasting room in Seattle, Wash. From less than 20 wineries in 1981, the Washington wine industry has grown to more than 1,000 this year. -- AP photo

Within the U.S., wines from California are the top sellers, followed by wines from Australia and Italy. Washington ranks fourth in the sources of wine sold in the U.S., said Steve Warner, president of Washington State Wine, the industry’s trade group.

“More Washington wine is sold in the United States than French wine,” he said.

“Washington has a higher percentage of 90-rated wines than other top wine-producing regions in the world,” Warner said, referring to the 100-point scale for rating wines. “We are competing against wine regions with 28 generations of winemakers, who were doing it before America was a country.”

Most of the industry’s success stems from the state’s climate and soils, Warner said. Wine grapes like long sunny days and cool nights, which the vineyards in the central and eastern part of the state enjoy.

The area also gets little rainfall compared with other grape-growing regions, which is a plus, he said.

Washington still has plenty of available land at reasonable prices in wine country, said Thomas Henick-Kling, director of the enology and viticulture program at Washington State University in Pullman.

The acreage dedicated to grapes for wine is rapidly expanding. Twenty years ago, there were 24,000 acres of grapes. Today there are 59,000 acres of vineyards.

Washington’s growth is no surprise, as the number of wineries and wine consumption continue to grow in the United States.

“The growth in wineries around the country is very exciting as wine sales continue to grow, particularly at the premium end,” said Gladys Horiuchi of the Wine Institute, which represents California wineries.

Wine shipments to the United States from all foreign and domestic sources grew 1 percent in 2018. The Wine Institute said people are drinking more premium wine, which starts at $8 per bottle.

The 1,000th active license was issued to Jens Hansen, owner of Uva Furem winery in Maple Valley. Hansen retired from the Air Force, moved to the Seattle area and decided to become a winemaker.

“I feel like the Washington wine community is a lot like the Air Force in that everyone looks out for each other,” Hansen said.

About 70 grape varieties are grown in Washington, with the most popular reds being cabernet sauvignon and merlot. Chardonnay and white Riesling are the most common whites.

Most of Washington’s wineries are fairly small. The owners “are passionate about wine and work full-time and crush grapes on weekends,” Warner said.

There are a smaller number of midsize wineries that enjoy national distribution, plus a handful of industry giants like Chateau Ste. Michelle, he said.

Many of the state’s best wineries are clustered around the old town of Walla Walla, which used to be known primarily for sweet onions and as home of the state penitentiary. Now it is home to world-class winemakers.